A proposal to increase the $300 above-the-line charitable gift deduction cap to more than $4,000 for individuals and $8,000 for married couples has gained bipartisan support as a potential key component of an emerging pandemic response package on Capitol Hill. 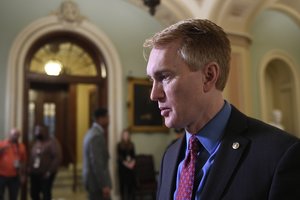 Sen. James Lankford, R-Okla., has proposed a bill that would increase the limit of the above-the-line charitable deduction to one-third of the standard deduction. (AP)

Supporters say the proposed new temporary incentive would boost charities' ability to help families deal with the effects of the pandemic by expanding the $300 above-the-line deduction for such gifts created by the Coronavirus Aid, Relief and Economic Security Act.

The new Universal Giving Pandemic Response Act, S. 4032, proposed by Sen. James Lankford, R-Okla., would limit the above-the-line deduction to one-third of the standard deduction, or about $4,133 for individuals and $8,267 for married couples in 2020.

Although the bill covers only donations in the current calendar year, it would let taxpayers claim an above-the-line deduction either on an amended 2019 tax return for 2020 charitable donations made before July 15, or on their 2020 tax return for any donations this year that were not claimed on their 2019 return.

Senate Finance Chairman Chuck Grassley, R-Iowa, said the proposal was attracting interest as a potential component of the Senate GOP alternative to ambitious relief measures such as expanded tax incentives for families with children passed by the House in the $3 trillion Health and Economic Recovery Omnibus Emergency Solutions Act, or Heroes Act. The two parties are looking to work out differences on a package that would provide an extension and a possible reshaping of the CARES Act's expanded jobless aid, expiring July 31.

"I think it's getting some legs. The reason I won't give you an answer — I'm for it or against it — is because I don't want anyone to make any of these decisions until about July 20," Grassley told Law360.

He was referring to his efforts to help develop the Senate GOP alternative to the Heroes Act, and the potential inclusion of Lankford's bipartisan proposal to expand the above-the-line deduction for charitable gifts, when lawmakers return from a two-week break the week of July 20.

Whether the proposal is included in an emerging Senate GOP plan or not, Lankford said he believed the bill would have strong bipartisan support for inclusion in any final bicameral package that could be assembled in negotiations. Democrats have argued for relief measures in the Heroes Act and for incentives for infrastructure and renewable energy passed by the House in a five-year reauthorization of the Fixing America's Surface Transportation Act.

Republicans have argued for business tax incentives and a five-year shield for businesses against COVID-19 liability lawsuits.

"We're pushing it, talking about it," Lankford told Law360. "It's a significant need for not-for-profit groups all around the country, obviously. It's for every American. And it incentivizes every rural nonprofit, every small nonprofit."

Lankford has been with an ally, Sen. Chris Coons, D-Del., to rally bipartisan support for his proposal.

"I am hopeful we will get an expansion of the charitable deduction," Coons told Law360.

In the House, Rep. Mark Walker, R-N.C., said he was trying to rally support for a companion bill with help from allies in both parties.

"If anything should be bipartisan right now, this should be. That's because many nonprofit charitable groups are going to be struggling," Walker told Law360.

House Ways and Means Chairman Richard Neal, D-Mass., stopped short of backing the bipartisan proposal for a bigger charitable deduction but made clear he was open to including it in the next pandemic response package.

"I am interested. Yeah," he told Law360, referring to the proposal for an expanded above-the-line deduction.

However, Roger Colinvaux, a professor at the Catholic University of America Columbus School of Law, said the effect of the proposed temporary expansion of the above-the-line deduction would be limited because of its timing and year-end expiration.

"The impact on overall charitable giving would be modest. The only effect on new gifts is for the five months left in this calendar year; the rest of the bill allows a deduction for gifts already made. Thus, for gifts prior to the date of enactment the bill would have no effect on giving, but is instead a retroactive subsidy," Colinvaux told Law360 in an email.

He said the bill's impact could be broadened to encourage more donors by making the proposal permanent and by setting a floor, or minimum threshold, for charitable giving to qualify for the expanded above-the-line deduction.

In addition to raising the cap on the above-the-line deduction, the Lankford bill would delete language added by the CARES Act to Internal Revenue Code Section 62(f)

that limited eligibility for an above-the-line deduction to cash donations and excluded gifts to organizations for new or existing donor-advised funds.

Colinvaux expressed concern that lawmakers were focusing mainly on donor incentives, and said they also should be trying to expedite distribution of funds by charities, including incentives to accelerate giving from donor-advised funds and foundations.

Lankford said he expected potential limits on the expanded above-the-line deduction to be addressed during negotiations on pandemic response legislation. For example, he said he believed there would be an effort by some lawmakers to set a charitable gift threshold — such as 1% of adjusted gross income — in order to qualify for the expanded above-the-line deduction in his bill.

"All of those things we are open to talking about," Lankford said. "Our target is for the individual small-dollar donor to be able to give to local nonprofits."

— including the increased standard deduction — on charitable giving.

Both Grassley and Senate Majority Whip John Thune, R-S.D., a senior member of the Finance Committee, said the Lankford proposal was gaining support among Senate Republicans. Grassley and Thune have expressed interest in oversight of the activities of donor-advised funds, but they voiced doubts about whether there would be efforts to advance new restrictions or requirements for such funds.

Thune said he still wanted to advance his bipartisan Charities Helping Americans Regularly Throughout the Year Act proposal, S. 1475, to allow donor-advised funds to receive rollover contributions from retirees' individual retirement accounts and require the disclosure of such funds that are inactive or dormant. But he also made clear he would not insist on combining his proposal with Lankford's plan in the next pandemic response package.

"That would ride on a tax vehicle, but I don't see anything in the near term," Thune told Law360, referring to his bill.