Now that Senate Republicans have unveiled new business tax proposals including an investment tax credit for domestic manufacturing of personal protective equipment, they face the daunting task of building support to include the incentives in final pandemic response legislation. 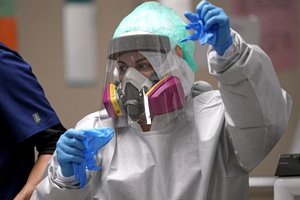 The new business incentives made the first cut by being included in the Senate GOP virus response plan, which was proposed Monday. House Democrats pushed for broader tax incentives for families with children and other relief measures passed by the House in May in the $3 trillion Health and Economic Recovery Omnibus Emergency Solutions Act.

Now, GOP senators are trying to shoehorn tax items from their plan, the Health, Economic Assistance, Liability Protection and Schools Act, or HEALS Act, into a final bicameral deal. It would follow up on the Coronavirus Aid, Relief and Economic Security Act,

Senate Majority Whip John Thune, R-S.D., a senior member of the Finance Committee, said there were no plans, for now, to bring bills containing parts of the GOP plan to the Senate floor. The fate of specific components of the package, he said, is up to negotiators from both chambers and the White House.

In the absence of Senate floor votes, GOP senators must find other ways to build support for including their initiatives in a bicameral package to address economic fallout from the novel coronavirus, which causes the respiratory disease COVID-19.

"It's probably not going to happen any time soon," Thune told Law360 when asked about any Senate votes. "If Democrats want a solution, I think we'll get there."

Sen. Lindsey Graham, R-S.C., said he was trying to rally support for one of the plan's centerpieces: a 30% tax credit for investments in qualified medical personal protective equipment manufacturing projects. Under his proposal, the credits would cover the production of masks, shields, clothing and related materials, as well as sanitizing supplies, privacy curtains, beds, testing swabs and tents, excluding certain sensors and electronics. The aggregate amount of all such credits would be capped at $7.5 billion.

"I think everybody's for it," Graham told Law360. "People want to be less dependent on China. It's just good policy, and quite frankly good politics for all of them."

He pointed to a July statement of support for a range of measures to promote domestic production of personal protective equipment from a coalition including the AFL-CIO, Service Employees International Union, National Council of Textile Organizations and U.S. Footwear Manufacturers Association. The Graham plan represents one of several GOP proposals in both chambers to promote domestic manufacturing of certain items for national security.

Democrats, however, have voiced mixed views on the proposal, with some arguing instead for mandates under the Korean War-era Defense Production Act

Sen. Sheldon Whitehouse, D-R.I., a member of the Finance Committee, said he was undecided about the tax credit, which would be paired with an expansion of a 1941 law

known as the Berry Amendment, requiring Pentagon purchases of certain domestically produced materials such as clothing, textiles, footwear and hand or measuring tools.

"I will be talking to Lindsey," Whitehouse told Law360. "I will know more after that. I start from the proposition that the Berry amendment has been very good policy. It has been good for our companies."

While Graham hunts for potential Democratic allies, Sen. Tim Scott, R-S.C., said he was mounting a similar campaign to salvage his proposal in the Senate GOP plan to double the current 50% deduction for business meals from the date of enactment to the end of 2020. He and other supporters are citing past expressions of support for such measures by Trump.

"I'm optimistic. If you think about it, it will allow the wait staff and the kitchen staff to be able to have more take-home pay," Scott told Law360.

Democrats such as Sens. Bob Menendez, D-N.J., and Tom Carper, D-Del., two senior members of the Finance Committee, have argued there was less need for the Scott proposal than several Democratic priorities. Menendez charged the proposal would amount to "bringing back the three-martini lunch" and instead backed a HEROES Act proposal to suspend the $10,000 cap on state and local deductions in 2020 and 2021. Carper has called for more food assistance for low-income families.

"Before I think I would modify the business tax deduction as Sen. Scott has proposed, I think I would focus more on trying to make sure nobody is going hungry in this country," Carper told Law360.

Despite such opposition, Sen. Rob Portman, R-Ohio, a senior Finance Committee member, said he believed there was an opening to rally support from lawmakers in both parties for the expanded business meal incentives and other items in the GOP package.

"They are bipartisan ideas. Everybody has a concern about hospitality businesses getting back on their feet," he told Law360.

Portman said he believed other items in the Senate GOP plan had a good chance of surviving in the final package, including his proposal for a refundable payroll tax credit for 50% of business expenses for COVID-19 testing, personal protection equipment, extra cleaning and workspace reconfiguration in 2020. The credit would be capped at $1,000 per employee for the first 500 workers, $750 apiece for the next 500 workers and $500 for each additional worker.

The Senate GOP plan also includes proposals to broaden the CARES Act's employee retention credit to cover a larger share of wages and to expand the work opportunity tax credit to cover the hiring of certain workers displaced during the pandemic.

Some of the plan's proposals, such as an additional round of economic impact payments, have bipartisan support. Others face Democratic opposition, including a proposal for bicameral rescue panels to deal with Social Security and Medicare starting in 2021 and a proposal to reduce the size of the allowance for $600 in extra weekly unemployment benefits in the CARES Act.

In the House, Ways and Means Chairman Richard Neal, D-Mass., has voiced interest in several GOP business tax proposals, including domestic manufacturing incentives. Nevertheless, Neal says such measures must be part of a broader compromise that incorporates his party's priorities, including a broader child and dependent care credit and an expanded refundable earned income tax credit for workers without children.

Meanwhile, Rep. Kevin Brady, R-Texas, ranking member on Neal's panel, has backed proposals similar to items in the Senate GOP package, including a refundable payroll tax credit to cover the cost of protecting workers and customers from the novel coronavirus and an expanded employee retention tax credit.

Sen. John Cornyn, R-Texas, a member of the Finance Committee and former majority whip, said backers of specific tax proposals would assemble coalitions of supporters to help cement slots in the pending pandemic response package. A White House spokesman was not immediately available to comment on the fate of Senate GOP tax proposals in pandemic-related negotiations.

In addition to proposals contained in the Senate GOP plan, Cornyn said he and other lawmakers were still trying to promote a refundable version of the general business credit as part of any package to replace the soon-to-expire expanded jobless aid. The credit would equal the cumulative value of various other tax credits, which currently can be carried back for one year or carried forward over 20 years.

Cornyn said that he did not expect his proposal for a refundable investment tax credit for new semiconductor plants to be included in a final package, but that he was pushing for inclusion of a grant program to support such projects.

"It's hard to know where this is going to go. But we're going to keep trying to get some of those tax provisions like monetization of the general business tax credits, which are important," Cornyn told Law360. "Deadlines are miraculous. They will force us to get it done."