A fight over fiscal priorities has forced Senate Republicans to focus on a shortlist of narrow tax incentives in lieu of broader business tax breaks in hope of reaching an accord on forthcoming legislation to address the novel coronavirus pandemic. 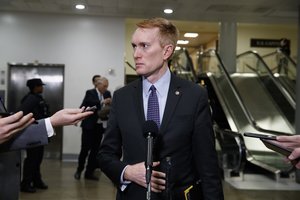 Sen. Jim Lankford, R-Okla., said the tax section of the upcoming coronavirus pandemic package "has to be COVID-related; it won't just be a grab bag of things." (AP)

Senate Republicans are weighing modest tax incentives as part of an overall package with an expected price tag of up to $1 trillion in response to a flock of relief measures passed by the House in the $3 trillion Health and Economic Recovery Omnibus Emergency Solutions Act.

Sen. Jim Lankford, R-Okla., said GOP leaders were vetting tax proposals tailored for the immediate fallout from the novel coronavirus, which causes the respiratory disease COVID-19, rather than more ambitious proposals such as permanent extensions of temporary business incentives in the 2017 tax overhaul.

"It has to be COVID-related; it won't just be a grab bag of things," Lankford told Law360, referring to the tax section of the package.

Lankford said he was continuing to push hard for inclusion of his bipartisan proposal to increase the $300 above-the-line charitable gift deduction cap to about $4,133 for individuals and $8,267 for married couples in 2020.

While Lankford remains uncertain about the fate of a broader charitable deduction, several lawmakers said the package likely would include an expanded version of the employee retention tax credit in the Coronavirus Aid, Relief and Economic Security Act.

They said it would also include a proposed refundable payroll tax credit for 50% of business expenses for COVID-19 testing, personal protection equipment, extra cleaning and workspace reconfiguration in 2020. The proposed tax credit was backed by Sen. Rob Portman, R-Ohio, and by House GOP tax writers, and would be capped at $1,000 per employee for the first 500 workers, $750 apiece for the next 500 workers and $500 for each additional worker.

"While continuing to support families, we must also get the economy into physical therapy so it can actually regain its strength," McConnell said.

Other tax proposals on the shortlist for the GOP package include a proposal from Portman to expand the work opportunity tax credit to cover furloughed workers with COVID-19.

Sen. Roy Blunt, R-Mo., chairman of the Republican Policy Committee, said the Senate Republicans' plan would shield businesses against COVID-19 liability lawsuits, provide funding for schools and universities and include his proposal for $15 billion in grants for child care providers.

"We are moving forward on those fronts in that way," Blunt told Law360.

An announcement by Treasury Secretary Steven Mnuchin that the GOP plan would exclude Trump's proposal for a payroll tax cut set off a scramble among Republicans to put other tax proposals in the package.

Several lawmakers said any action on the GOP proposal could be delayed by objections raised by some senators about the scope and cost of certain parts of the evolving plan. For example, Sen. Ted Cruz, R-Texas, has raised questions about additional economic impact payments in the package and said he would prefer broader tax proposals, such as a capital gains tax cut.

"Our focus should be on passing a recovery bill, helping small businesses who shut down to reopen and hire people again and create jobs again. We're not going to solve this crisis by shoveling cash at it," Cruz told Law360.

A potential linchpin of the Senate GOP plan may be a proposal to replace an allowance for $600 in extra weekly jobless aid under the CARES Act, which expires July 31, with a smaller upgrade in weekly benefits.

Mark Meadows, Trump's chief of staff, outlined to reporters the idea of a potential patch pairing aid for schools and a new GOP plan to provide a smaller, capped amount of extra jobless aid, which he said had yet to be endorsed by either party.

"If the Democrats agree with Republicans that they want to make a priority out of making sure that those benefits don't lapse, I think that that's the most pragmatic way to get it done," Meadows said.

But Democrats in both chambers threw cold water on the idea of such a stopgap measure to allow more time for a bigger deal. Sen. Debbie Stabenow, D-Mich., a senior member of the Finance Committee, said Senate Democrats would insist any extension simply continues the CARES Act's extra jobless aid.

"If they want to continue current law, that would be the right thing to do," Stabenow told Law360.

In the House, Ways and Means Chairman Richard Neal, D-Mass., said he had no interest in a short-term measure with less jobless aid. He made clear that he and other Democrats would focus on advancing several new temporary tax incentives and state aid included in the Heroes Act.

"We want the EITC and child care," he said, referring to proposals for a broader refundable earned income tax credit for workers without children and a new refundable version of the child and dependent care credit created by the 1976 tax law

Neal said Democrats also were putting a priority on broader incentives for families with children and on language in the Heroes Act to expand the employee retention credit to cover 80% — instead of 50% — of an employee's salary and broaden eligibility to include recipients of Paycheck Protection Program loans.

"The COVID focus makes it even more important that we include the House Republican provisions on becoming medically independent. This is really key there," Brady told Law360.

But Brady said he also would continue promoting ambitious proposals to expand items in the 2017 tax overhaul, such as permanent extensions of full expensing of business equipment and of qualified research costs.

"We have to look for growth beyond the next two months," Brady said.

He and other Republicans also have been exploring proposals for more refundable business incentives.

While Brady and other Republicans seek openings for broader stimulus measures, Portman and other GOP senators said they believed more limited measures focused on curbing the novel coronavirus and countering its economic effects were getting the most traction. Portman said that party leaders were "pulling things together," including tax proposals with broad consensus support in the Senate Republican Conference.

"We will figure out a way to come together as Republicans and Democrats to pass something sensible," Portman told Law360.