A bipartisan push to promote business tax incentives faces headwinds ahead of a House Ways and Means Committee markup next week to advance the tax package for President Joe Biden's $1.9 trillion American Rescue Plan as part of a filibuster-proof reconciliation bill. 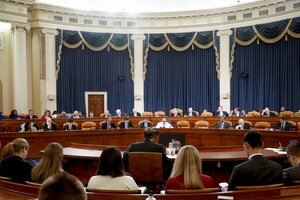 Congressional lawmakers in both parties are making the case for business tax incentives to help companies and employees counter the economic effects of COVID-19. (AP Photo/Andrew Harnik)

and parts of the Coronavirus Aid, Relief and Economic Security Act

enacted last March. Several Democratic lawmakers said they were pushing to add business incentives to the House Ways and Means Committee chairman's draft that will be the starting point for the committee's markup of its part of the reconciliation bill.

Ways and Means Chairman Richard Neal, D-Mass., said he expected to mark up his panel's portion of the reconciliation bill next week and was open to plans to add business tax incentives to the pandemic response package. Neal also stressed his desire to work closely with the administration on any tax-related proposals. And he said any add-ons would need to be vetted to ensure they would pass muster with Elizabeth MacDonough, the Senate parliamentarian, and comply with a Senate mandate that any reconciliation measures have a significant impact on the budget.

"We're talking about all of it right now," Neal told Law360. "If the administration has got suggestions, I'm happy to hear them. When it gets over to the Senate, it has to be ruled in order by the parliamentarian," he said, when asked about potential business tax incentives.

House Budget Chairman John Yarmuth, D-Ky., said he, Neal, House Speaker Nancy Pelosi, D-Calif., and a group of 10 other top party leaders and committee chairmen did not discuss business tax incentives or other tax measures in a two-hour meeting with Biden in the Oval Office on Friday to discuss the reconciliation bill. Yarmuth said Neal would not have much room to add new tax incentives and emphasized that Democratic leaders had no plans to add any contentious revenue-raising measures such as a proposal to increase the 21% corporate tax rate.

House Majority Leader Steny Hoyer, D-Md., who also attended the session with Biden, said the meeting focused on sticking to the $1.9 trillion price tag for Biden's package and on coordinating moves by the House and Senate.

"We're really focused on getting it done. And we will get it done," Hoyer told Law360. He said a dozen House committees of jurisdiction for the bill were supposed to complete work within about two weeks.

As Neal prepares for the markup, some lawmakers in both parties are making the case for business tax incentives to help companies and their employees counter economic effects of COVID-19, the respiratory disease caused by the novel coronavirus.

With little progress in talks aimed at cutting a bipartisan compromise on pandemic relief, Democrats have been focused on moving Biden's plan in a reconciliation bill shielded from Senate filibusters. And the Ways and Means markup may be the best opportunity for advocates to insert business tax incentives in such legislation or in a possible manager's amendment in the markup.

That's because several senior Democrats said party leaders hoped to avert amendments on the House floor as they race to advance the reconciliation bill outlined in the fiscal 2021 budget resolution, S.C.R. 5, cleared by the House on Friday. They said the budget resolution would allow little room for business tax incentives under the $941 billion cap for the tax-writing panel's share of the reconciliation bill, since most of that allotment will be needed to cover $1,400 relief checks for qualifying adults, incentives for working families and other priorities.

"There's not much room," Yarmuth said, referring to the cap on Neal's portion of the bill.

As Democrats raced to assemble the tax package for the reconciliation bill, Rep. Mike Thompson, D-Calif., a member of the Ways and Means Committee, said some new business tax incentives may be needed in part because many businesses have earned less taxable income during the pandemic and cannot take full advantage of deductions for business expenses.

Thompson said he was trying to build bipartisan support for a proposal, H.R. 615, for a payroll tax credit aimed at helping businesses closed because of the pandemic to cover fixed expenses such as rent and utilities.

Other lawmakers in both parties are pushing for a range of business incentives including income and payroll tax credits to help businesses cover the cost of steps they have taken to protect staff and customers from COVID-19. For example, Rep. Stephanie Murphy, D-Fla., said she was trying to revive a bipartisan proposal for an income tax credit to help businesses cover 50% of qualified cleaning expenses.

"I've asked the leadership to consider putting that in the reconciliation bill," Murphy told Law360.

For their part, some Republicans have backed a $600 billion pandemic response plan backed by a group of GOP senators with no tax provisions. But other GOP lawmakers have said they are interested in developing new business tax incentives aimed at countering the pandemic's fallout.

Rep. Kevin Brady, R-Texas, ranking member on Ways and Means, said he was examining potential amendments to offer in the Ways and Means markup. He made clear he was weighing a number of ideas similar to GOP plans developed last year, including potential extensions of temporary items in the 2017 Tax Cuts and Jobs Act.

For example, some GOP lawmakers have examined proposals to extend full expensing for business equipment and similar incentives to cover qualified research costs.

"There's virtually nothing to stimulate the economy, to either help Main Street businesses or get people back to work," Brady told Law360.

He and other Republicans argued that Biden's proposals to expand for 2021 the child tax credit, earned income tax credit for workers without children and the child and dependent care credit were too broad in scope and would not have much lasting impact on growth.

But Democrats have said these incentives would help working families cover pandemic-related expenses and inject needed cash in the economy.

In the Senate, Finance Chairman Ron Wyden, D-Ore., said he had not decided whether to hold a markup of tax proposals to be included in the reconciliation bill.

"I have to talk with my colleagues," Wyden told Law360.

But several senior Democrats said they had doubts about whether there would be a Senate markup. That's because a House-passed reconciliation bill could bypass Senate committees and go directly to the floor, where it could be passed if all 50 members of the Democratic caucus vote aye and Vice President Kamala Harris casts a potential tie-breaking vote.

Facing uncertain prospects for adding amendments in the Senate, proponents of business tax incentives have been trying to rally support for such items as the reconciliation bill moves through the House.

While strongly opposing the use of a reconciliation bill to advance a pandemic response package, several senior GOP senators said they hoped to develop bipartisan support for targeted incentives for businesses and families, which could be added to the reconciliation bill or to other 2021 tax measures.

Sen. Mike Crapo, R-Idaho, the top Republican on the Finance Committee, said he was examining pandemic-related tax proposals, but was not ready to support any of them.

"The resources need to be much more focused. And part of it needs to be business support," Crapo told Law360.

Sen. Rob Portman, R-Ohio, a senior tax writer, said there could be bipartisan support for building on the newly enacted extension through June 30 of a modified employee retention tax credit in the year-end pandemic relief deal. The law expanded the refundable payroll tax credit for employee retention to help employers cover 70% — up from 50% — of qualified workers' wages for the first half of 2021.

Portman also has been exploring incentives aimed at helping businesses provide a safe and healthy workplace for their employees during the pandemic.

Sen. Mark Warner, D-Va., a member of the Finance Committee, said he was developing a proposal for a new tax credit to help employers finance worker training during the pandemic. He said he may look to pitch the idea to party leaders and the Biden administration if there is no Senate markup.