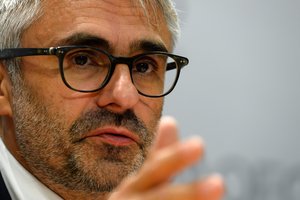 Pascal Saint-Amans said the U.S. position on global tax rules was unclear and had hindered the chances of reaching agreements on outstanding questions. (Eric Piermont/AFP via Getty Images)

Saint-Amans, the Organization for Economic Cooperation and Development's director for tax and administration, said the project to overhaul the global tax rules and address concerns about tax avoidance in digital or online commerce needed U.S. support to succeed.

Speaking at an online webinar hosted by the University of Oxford, Saint-Amans said the U.S. position on the project's scope — how many taxpayers should be affected by the new rules, and how they would be singled out — was unclear and had hindered the chances of reaching agreements on any of the outstanding questions.

Several countries, as well as the European Union, have considered or enacted taxes in the past few years on revenue from online activities such as data collection or web advertising. While those countries claim the measures are necessary to address gaps in the current tax rules that allow digital income to escape taxation, U.S. officials have blasted them as unfair, discriminatory measures targeting the dominant U.S. technology sector. While President Donald Trump's administration readied retaliatory tariffs on products from countries that have enacted digital taxes, officials from the U.S. Treasury Department also worked with representatives from other nations at the OECD to find agreement on how to resolve the issue.

The sides seemed close to an agreement based on some ideas promoted by the U.S. that would allow countries some taxing rights on companies which sell into or use their markets, regardless of whether they have a physical presence there. But U.S. Treasury Secretary Steven Mnuchin wrote a letter to the organization in December abruptly announcing opposition to the proposal and demanding that it be considered only as an optional safe harbor. The talks reached a stalemate during the coronavirus pandemic, as the U.S. asked that the project be halted while countries responded to the disease's fallout. While the project faced an original 2020 deadline, set by the Group of 20 coalition of advanced economies, OECD officials now hope to reach an agreement by mid-2021.

Officials from other governments, also speaking on Monday's panel, agreed with Saint-Amans.

"The problem is that currently, I wouldn't say there is a clear U.S. position, but rather a collection of red lines," said Gaël Perraud, deputy director for international taxation and European affairs for the French Ministry of the Economy and Finance. "And those red lines, added from time to time, are competing with one another, and creating a kind of blocking situation."

Perraud said that the U.S. stances both against digital-specific taxes but also against a broad mandatory tax contradicted themselves, and prevented further progress.

"What I would hope, because I don't know what the future will be made of, is that maybe the U.S. position will be reframed in terms of revisiting those red lines and trying to make choices," Perraud said. "And instead of having only red lines, coming in with a proposal."

But, Perraud noted, the U.S. position will not only be dictated by the new administration but also the House or the Senate, which would need to approve any legal changes or changes to existing tax treaties.

Mike Williams, director of business and international tax at HM Revenue & Customs, said the process was stuck in a cycle and blamed disagreements between the U.S. technology and nontechnology companies, pushing the government in opposite directions on whether a narrow or broad solution would be the best. Other countries, including the U.K., have been more "consistent and coherent" on their guiding principles while still agreeing to compromise, he said.

"So I think greater clarity and greater consistency from the U.S. will be a distinct advantage," Williams said.

Treasury and President-elect Joe Biden's transition team did not respond to requests for comment.