Delaying US Corporate Tax Hikes Won't Put Off Their Bite

The Biden administration hopes to phase in planned tax hikes to pay for infrastructure improvements while minimizing harm to the recovery from the coronavirus pandemic, but experts say most economic effects of corporate tax changes will be impossible to delay. 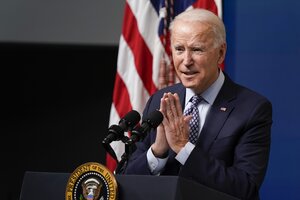 President Joe Biden has proposed hiking the corporate tax rate from 21% to 28%, lower than the previous rate of 35%. (AP Photo/Evan Vucci)

Companies must incorporate anticipated tax changes into their financial reporting immediately, and for those that are publicly traded, their stock prices will react as soon as the news is out.

In addition, when companies make decisions about investments, they will likely take into account permanent, long-term tax rates rather than short-term fluctuations.

"A short delay in a tax rate increase won't do much to alleviate the disincentive to invest today," said George Callas, a partner at Steptoe & Johnson LLP and a former Republican tax counsel in the House of Representatives. "This is especially true in industries with long investment horizons like pharmaceuticals and aerospace."

Speaking on CNBC on Feb. 18, Treasury Secretary Janet Yellen did not say what kinds of tax hikes the administration was considering, but said they would be used to offset permanent costs of an infrastructure bill.

"It would be a package that would probably be proposed later this year, and would involve spending and investment over a number of years, in infrastructure and education and training, things that would last for quite a few years," Yellen said. "And probably tax increases to pay for at least part of it, that would probably phase in slowly over time."

The U.S. Department of the Treasury and the White House did not respond to requests for further information.

During the 2020 presidential campaign, Joe Biden proposed many measures that would increase tax revenue, although he promised that none would impact those earning less than $400,000 per year. Those included a hike in the corporate tax rate from 21% to 28%, measures to tighten existing policies such as the tax on global intangible low-taxed income, and a new 15% global alternative minimum tax to be based on financial data.

According to accounting experts, these measures would have an immediate effect on a company's financial earnings statements — regardless of whether or not they were phased in over time.

Under basic financial reporting principles, when companies draw up current earnings statements they must incorporate potential long-term costs, or revenue gains, that are due to taxes. These often occur due to differences between how the tax code measures taxable income, and how financial accounting measures profits, especially in timing.

If a company can claim accelerated deductions on expenses from a new investment, it will likely face a deferred tax liability because its taxable income will be higher in future years than profits reported through financial accounting, which has a slower schedule for spreading out costs. Likewise, deductions that companies can claim only in future years, such as net operating losses, are considered deferred tax assets.

Just as with normal assets and liabilities, these figures will be included in the calculation of current tax costs, and ultimately corporate earnings. But future rate changes will also change those calculations.

"There will be an immediate impact on financial statements," Andrew Belnap, an assistant professor of accounting at the University of Texas, wrote to Law360 in an email. "Any time there is a rate change, deferred tax assets and liabilities are revalued, which also affects the tax expense on the income statement."

It won't necessarily be true, however, that higher future taxes will result in reduced earnings. In some cases deferred tax assets might grow due to a timing change. For instance, depending on how the legislation is written, a future deduction's value could increase with a rise in the corporate tax rate.

"One way this could be interesting right now is the fact that there are more companies than usual with net operating losses, given the pandemic," Belnap said. "These companies can carry these forward and would actually see a boost in their financial statement incomes, because the deferred tax asset will increase."

In other cases, the timing differences could affect a company's decision-making, regardless of the immediate earnings impact. Kyle Pomerleau, a resident fellow at the American Enterprise Institute, a right-leaning think tank, noted that companies may put off investments if they know that they can deduct more from the expenses in the future, when the tax rate will be higher.

"So in this case, an immediate tax increase to 28% would be less damaging to investment incentives than a delayed increase," Pomerleau said. "A consequence of this is that delaying a corporate rate increase would likely result in a delay in some corporate investment. Corporations would recognize the disadvantage of putting an asset in service while the rate is low."

The earnings impact of other changes, such as Biden's proposal to calculate the GILTI tax on a country-by-country basis, could be harder to predict.

Upon passage and enactment of the legislation, the stock market would also immediately react. due not only to changed earnings statements, but also to the anticipation of future new tax costs.

"This should happen as it becomes likely the law will pass. Once passed, the market should fully incorporate that the future cash flows from the firm will be lower," Jeffrey Hoopes, a professor of tax and financial accounting at the University of North Carolina, wrote in an email to Law360.

"What matters is what the tax rate will be when the investment becomes profitable," Callas of Steptoe & Johnson said. "Delaying a higher rate for a couple years doesn't change the fact that the investment will look worse."

, while allowing much of the rest of the bill, including tax benefits to individual taxpayers, to expire. If a lower tax rate were temporary, the uncertainty would have been enough to dampen the investment benefits even if Congress were to ultimately extend the whole bill.

While many of Biden's tax proposals targeted businesses, they also included changes to other areas of taxation. The Tax Policy Center, a liberal-leaning think tank, estimated that Biden's entire package would raise $2.1 trillion in revenue over 10 years. Of that amount, $1.12 trillion would come from corporate tax changes and $758 billion from individual tax changes, such as an increase in the rate on capital gains, a $400,000 limit on itemized deductions and an increase in the rate on top earners.

Sen. Ron Wyden, D-Ore., who chairs the Senate Finance Committee and would likely play a major role in drawing up tax legislation, also did not hint at what tax hikes were under consideration.

"The catastrophe in Texas has underscored the urgent need to address the climate crisis and rebuild our infrastructure," Wyden said in a statement released by his office, alluding to this month's cold-induced electric outages in that state.

"In the recovery package, my priorities will be making these critical investments by ensuring the wealthy and megacorporations pay their fair share," Wyden continued. "I'm working on a number of proposals that will be unveiled over the coming months."