The Ohio House of Representatives passed a bill Wednesday that would bar cities from imposing income taxes on remote workers for 2021, seeking to partially reverse a law that permitted cities to tax telecommuters during the coronavirus pandemic. 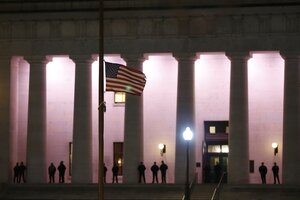 The Ohio House of Representatives voted 63-31 Wednesday to approve a bill that would bar cities from imposing income taxes on remote workers for 2021. (AP Photo/Jay LaPrete)

The Republican-controlled chamber approved H.B. 157 by a 63-31 vote, sending the measure to the state Senate. Republicans championed the bill as prospectively correcting a policy that allowed cities to impose taxes on employees who work outside their borders. Democrats argued the legislation could be financially devastating for municipalities that have already approved their 2021 budgets based on projected income tax collections from telecommuters.

The bill would specify that a 2020 law

that temporarily deems remote work performed during the pandemic to occur at an employee's principal place of work allows withholding flexibility for 2021 but doesn't alter the determination of an employee's municipal income tax liability. However, the bill would not retroactively require cities to issue refunds for taxes on remote workers for tax year 2020.

The temporary local income tax change was enacted through H.B. 197 last year and will be in effect until 30 days after Ohio lifts its pandemic-related state of emergency. That law has been at the center of a series of legal challenges from teleworkers who claim cities are unconstitutionally taxing them.

Rep. Kris Jordan, R-Ostrander, the primary sponsor of H.B. 157, said on the House floor that H.B. 197 was intended to be a short-lived provision during coronavirus-related shutdown orders, but the pandemic has lingered longer than lawmakers anticipated it would.

"All the while employees have been taxed by the municipalities where they neither lived in nor performed any work in for over a year," Jordan said. "This is simply not fair to the Ohio taxpayers who we represent."

Jordan added that the legislation would provide certainty for businesses by ending the withholding relief on Dec. 31, 2021, rather than at the whim of when the pandemic-related state of emergency is lifted. The bill would also specify that a business should apportion or situs wages for municipal net profit tax purposes at an employee's principal place of work through the end of 2021.

Democrats held an opposing view of the bill. Rep. Lisa Sobecki, D-Toledo, the ranking member of the House Ways and Means Committee, called the measure unfair to businesses and municipalities because it proposes to alter the state's policy on local taxes in the middle of the 2021 tax year.

"Changing the rules now would pull the rug out from underneath our cities," Sobecki said on the House floor.

The chamber later voted down an amendment from Sobecki that sought to extend the local tax sourcing change from H.B. 197 through 2022. During her floor speech, she said that committee testimony had shown that Ohio's six largest cities could lose a combined $306 million if most employees don't return to the office and continue to work remotely after the pandemic.

But House Majority Floor Leader Bill Seitz, R-Green Township, countered that the federal aid that cities are projected to receive from the American Rescue Plan Act

will more than offset the tax revenue that will be forgone from not taxing remote workers in 2021.

Seitz added that he viewed last year's bill as only providing flexibility for withholding purposes. He noted the legislation wouldn't compel cities to refund taxes to remote workers for 2020, despite that being a departure from the historical manner in which the local income taxes have been applied.

"The bill before us today is exceedingly generous to the cities." Seitz said.

As introduced, the bill specified that H.B. 197 pertained only to withholding relief and didn't allow cities to tax remote workers in 2020 or 2021. But the House Ways and Means Committee passed a substitute bill that declined to address tax year 2020, following testimony from local government representatives who cautioned that allowing retroactive refunds for a closed tax year could cripple municipal budgets.

A representative of the Ohio Municipal League did not immediately respond to a request for comment. The league opposed the prior version of the bill that would have permitted the refunds for 2020 but had also supported its Dec. 31, 2021, sunset date for the local income tax rule changes.

In a statement after the vote, Sobecki said that the legislation "will decimate local government resources."

"H.B. 157 will force cities and townships alike to make some tough choices on whether to fund the services essential to our daily lives, from police, fire and emergency services to parks and road repairs," she said.

Jordan did not immediately respond to a request for comment.

While the legislation addresses tax year 2021, a handful of outstanding lawsuits are seeking refunds for remote workers for tax year 2020. In April, the Franklin County Court of Common Pleas dismissed a challenge against the city of Columbus, the first complaint that was filed. The Buckeye Institute, a free-market research group that is representing the remote workers in the cases, has filed a notice of appeal.

The taxation of remote workers during the pandemic has sparked litigation around the nation. St. Louis is facing a proposed class action from nonresidents, and New Hampshire has asked the U.S. Supreme Court to invalidate a Massachusetts rule that temporarily imposes income tax on remote workers during the pandemic. But acting Solicitor General Elizabeth B. Prelogar told the justices Tuesday that they should pass on the case.