Chauvin Convicted Of All Charges In Floyd Slaying 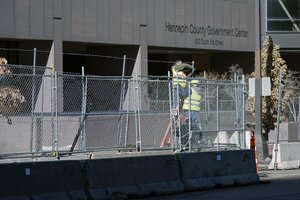 Hennepin County Judge Peter Cahill said in a January order that if Chauvin was convicted by a jury, the judge would consider an upward departure from sentencing guidelines. That will be determined at a future hearing.

Chauvin killed Floyd last Memorial Day during Floyd's arrest for allegedly using a $20 counterfeit bill at a convenience store. Chauvin pressed his knee into Floyd's neck for more than nine minutes as Floyd, who lay handcuffed face-down on the ground, begged Chauvin to stop, said he couldn't breathe and eventually lost consciousness. A bystander video of the killing was viewed by millions and sparked nationwide racial justice protests last summer.

In court on Tuesday, Judge Cahill thanked the jurors for what he called "heavy-duty" jury service.

The verdict suggests that jurors were convinced by prosecutors' allegations that Chauvin used an unreasonable amount of force for too long and should have known he was killing Floyd. The jurors weren't persuaded by the defense's arguments that Chauvin used a reasonable amount of force because Floyd was resisting arrest, and that Floyd didn't die because of Chauvin's actions but because of a host of other reasons — chronic heart disease, drug addiction, carbon monoxide poisoning from a nearby tailpipe and a rare tumor that may have secreted adrenaline, according to the defense.

Chauvin's attorney, Eric Nelson of Halberg Criminal Defense, did not immediately respond to a request for comment. Nor did the Minnesota Police and Peace Officers Association, which paid Chauvin's attorney fees.

Minnesota Attorney General Keith Ellison, whose office prosecuted the case, in a press conference Tuesday thanked the community for giving his attorneys time to do the "long, hard, painstaking work" of reviewing the facts and gathering evidence.

"Since the investigation and prosecution of this case began last May, everyone involved has pursued one goal: justice. I would not call today's verdict justice, however, because justice implies true restoration. But it is accountability, which is the first step toward justice."

Floyd family attorney Ben Crump said he and the Floyd family were "going to try to leave here today knowing that America is a better country."

The verdict capped off a three-week-long and at times emotional trial during which jurors heard from more than 40 witnesses, including traumatized bystanders who witnessed Floyd's last breaths, people who knew Floyd and spoke about his life, medical experts who opined on what caused his death, and policing experts who testified about whether Chauvin acted appropriately.

The image of a Black man gasping for breath under the knee of a white police officer sparked a nationwide racial justice movement last summer, with protests occurring in every state. Many companies, including law firms, vowed to improve their diversity and inclusion efforts.

The issue of lethal racism in policing was rekindled twice during the three-week trial: when an officer killed another Black man, Daunte Wright, during a traffic stop just outside Minneapolis on April 11, and again April 16 when the Chicago Police Department released footage of 13-year-old Adam Toledo, who was Latino, being shot dead by an officer.

But the issue of racism was painstakingly avoided at Chauvin's trial, which instead focused on whether Chauvin killed Floyd and whether his use of force was appropriate for a police officer.

To convict Chauvin of second-degree murder, the jury had to find that Chauvin killed Floyd while committing felony assault. And to prove assault, the prosecution had to show that Chauvin's use of force was criminal — not within the legal bounds of his powers of arrest as an on-duty officer.

For the third-degree murder charge, the prosecution had to prove to the jury that Chauvin was acting with "a depraved mind." And for second-degree manslaughter, prosecutors had to prove Chauvin's "culpable negligence" by putting Floyd at risk.

Those two lesser charges were likely "easier for the jurors to figure out guilty or not guilty," according to Hinshaw & Culbertson LLP partner David Weinstein, who worked for two decades as a prosecutor in Florida. Those convictions hinged on the choice Chauvin made not to render medical aid to Floyd once he was in distress, and the question of whether Chauvin was culpable for "doing something that should have given him pause," Weinstein said.

Regardless of the jury's verdict, some legal scholars, like Alexis Hoag, a Columbia Law School professor and former senior counsel at the NAACP Legal Defense and Educational Fund, are hoping that the trial has put a spotlight on the high legal threshold for holding police officers accountable for on-the-job violence.

"I hope it's obvious to the country that we need to reassess the way police officers operate in society and the legal standard and procedures for that are in place for police officers as suspects, as criminal defendants," she said. "We need a fundamental overhaul of both."