Wisconsin held its Supreme Court election during the April primaries, and Jill Karofsky beat incumbent Daniel Kelly by a 10% margin.

Karofsky and Kelly were the two most well-funded judicial candidates of this election season. Karofsky raked in $2.7 million in direct contributions, $1.3 million of which came from the state's Democratic party, according to data from the National Institute on Money in Politics. Kelly's campaign war chest totaled $2.1 million, $320,000 of which came from the Wisconsin Republican Party.

They also benefited from outside spending by political action committees, according to data compiled by the Brennan Center for Justice.

The liberal group A Better Wisconsin Together spent more than $562,000 on television ads backing Karofsky, accusing Kelly of having a "real bad" record fighting corruption. Kelly benefited from more than $1.2 million worth of advertising that accused Karofsky of being "dangerously soft on crime." It was paid for by an arm of the state's chamber of commerce group known as the WMC Issues Mobilization Council, as well as the Republican State Leadership Committee.

Yet, for all the partisan money flying around, Wisconsin's supreme court elections are officially nonpartisan.

"That has become a charade," according to Jay Heck, executive director of Common Cause Wisconsin, a nonpartisan government accountability watchdog.

While candidates don't officially espouse a label and no party affiliation appears on the ballot, everyone knows who is affiliated with what party, Heck said. This year, Kelly won an endorsement from President Donald Trump and Karofsky won endorsements from both former Vice President Joe Biden and Sen. Bernie Sanders, I-Vt. — the Democratic nominee hadn't been decided by the election.

"The political parties get involved in these races now, and they spend a lot of money that goes into tearing down the opponent or boosting the candidate they favor," Heck said. "As a result we have ridiculously expensive supreme court elections. This is for an office that's supposed to be nonpartisan."

This year is not unusual. Nor is Wisconsin an outlier.

Out of 38 states that elect their justices, 35 are holding supreme court elections in 2020, and only one of the states that hold partisan elections — Pennsylvania — has no seats up for grabs.

Yet six of this year's top 10 judicial campaign war chests belong to candidates running in three states that don't announce their party affiliation on the ballot — Wisconsin, Ohio and Michigan.

The states with partisan races on that list — Illinois, Texas and North Carolina — are no strangers to high-rolling candidates. North Carolina is drawing attention this year as both a battleground state in the presidential contest, and as a state where three supreme court seats are up for grabs on the seven-member court. 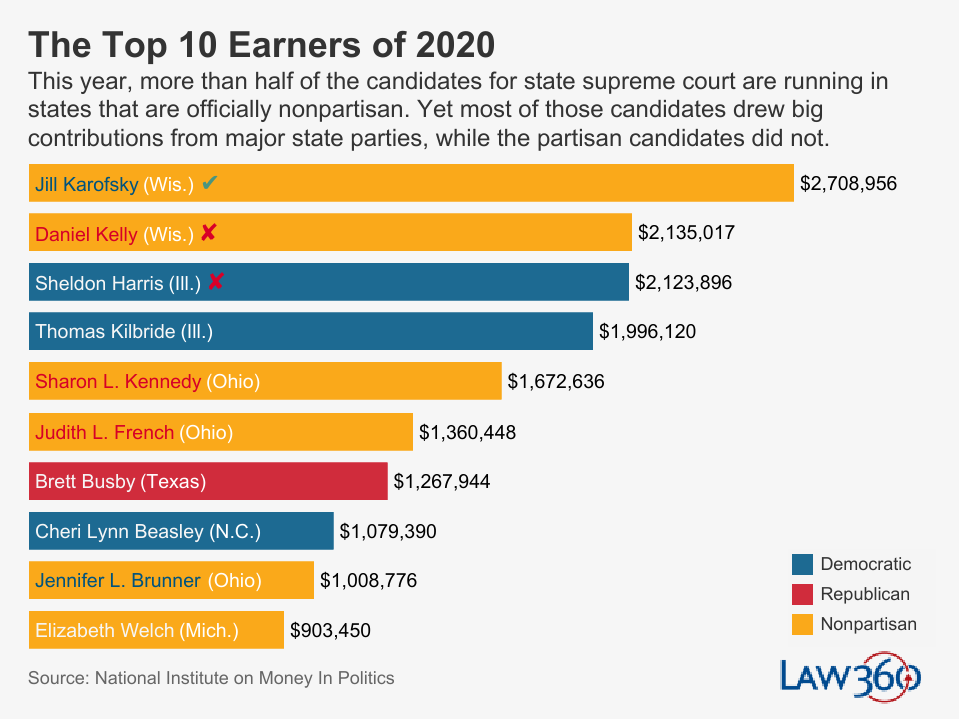 
Perhaps the most remarkable trend this year is that none of the well-funded supreme court candidates running in partisan states received any money from their state party, while those in so-called nonpartisan elections drew large contributions.

All this reflects a larger trend, according to a Law360 analysis of campaign contributions.

Donors instead focused on partisan races, and in the late 1990s, it seemed that was money well spent, according to Northwestern law professor Michael Kang.

He co-authored a 2011 empirical study that looked at four years' worth of state supreme court decisions across the country during the late '90s. The study found that not only were justices who'd been elected in partisan races more likely to side with business interests, but the more campaign money they'd raised during their election, the more likely they were to rule in favor of corporate interests. Justices who ran in nonpartisan elections weren't susceptible to the same influence. 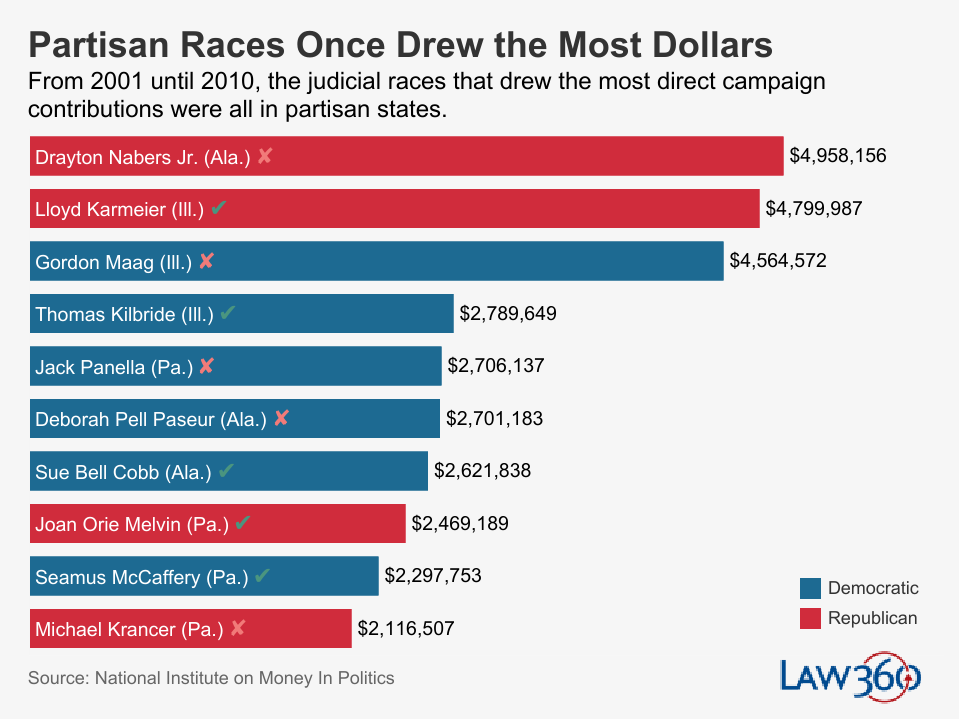 
But Kang told Law360 he doubts the results would be the same today.

"It's been 20 years," he said. "I think the study was right at the time, but it's very possible that given how much partisanship has escalated since the '90s, we might find something very different if we looked at data from the last few years."

And while all of the candidates who ran between 2001 and 2010 received thousands of dollars from a major party committee in their state, between 2011 and 2020, some of the biggest earners in partisan states like Illinois and Texas didn't get a dime from their state party, according to data from the NIMP data. 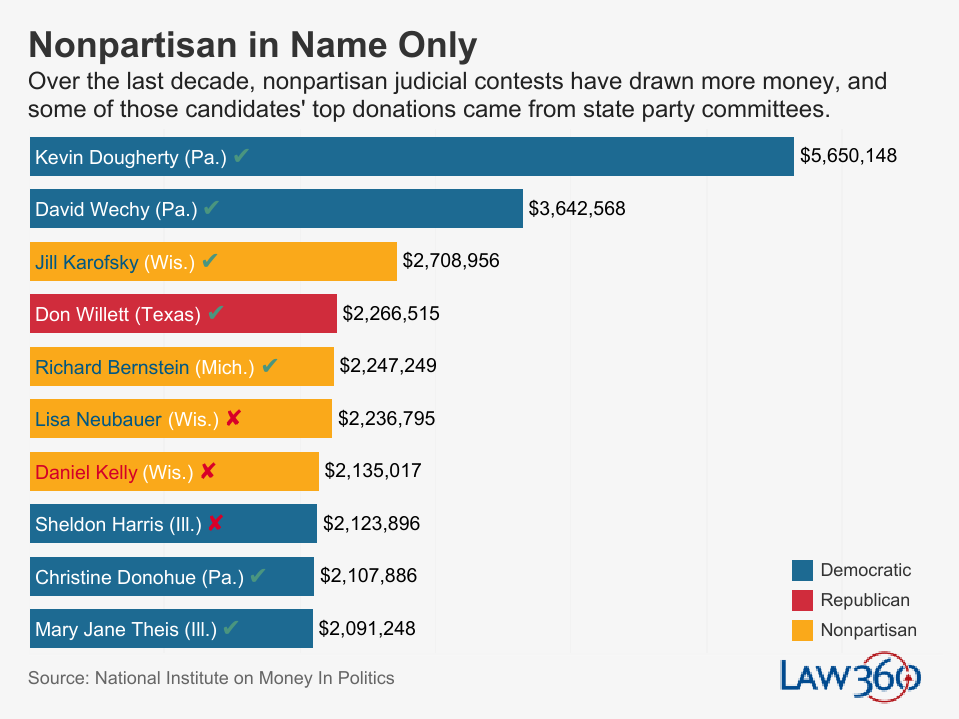 
Competition may be affecting where political dollars go. In some states that hold partisan judicial elections — like Louisiana, Texas, and Alabama — Republican justices enjoy the majority of seats on the court. Democratic state party officials might be disinclined to spend their money on a race they're unlikely to win, just as their Republican counterparts might feel their resources may be of better use elsewhere.

The opposite is true in states like Michigan and Ohio, where the ideology of the court is more balanced, according to Doug Keith, counsel for the Brennan Center for Justice's Democracy Program.

In Ohio, five of the seven justices are Republicans, but two of those Republicans are up for re-election this year. In Michigan, the current court is composed of four Republicans and three democrats. Two incumbents, one from each party, are up for reelection.

"The things that tend to drive spending in state supreme court elections are foremost the possibility that the ideological or partisan balance on the court could flip as a result of the election," Keith said.

That may explain why direct contributions to nonpartisan candidates are going up, while in some states, partisan elections are drawing less money.

On the whole, campaign contributions to state supreme court races have decreased. In the past decade, 655 candidates raised $164 million, compared to the 625 candidates who raised $183 million from 2001 to 2010.

But a few states have seen their numbers surge — and they are nonpartisan.

Michigan high court candidates raised $14.7 million in the past decade, compared to $8.5 in the prior 10 years, amounting to an average increase of about $50,000 per candidate.

In Wisconsin, state supreme court races earned nearly $18 million over the past decade, almost three times as much as the prior decade. On average, candidates since 2011 have received about $855,000 in direct contributions, compared to $482,000 between 2001 and 2010.

Kang says that trend may reflect parties at first prioritizing partisan contests, then turning to nonpartisan state races later on.

"I think the partisan states got politicized earlier and the money came on earlier, and so the nonpartisan states had some room to catch up," he told Law360. "Particularly where judicial elections were sleepier, that's where you saw the real step up, because there was just more room to climb."

Another factor may have been the U.S. Supreme Court's 2002 Republican Party of Minnesota v. White,

which blurred the distinction between partisan and nonpartisan states. The ruling ended a Minnesota judicial conduct rule that forbade state supreme court candidates from expressing their views on legal or political issues, finding the rule violated the First Amendment by muzzling free speech.

Lower courts soon interpreted that to mean that even in states with nonpartisan elections, candidates could announce their party affiliation while campaigning, according to Charles Geyh of Indiana University's Maurer School of Law.

"It kind of defeated the whole point of a nonpartisan race," Geyh said. "The difference between partisan and nonpartisan races originally was, 'We want politics out of these things. Judges shouldn't be Republican judges or Democrat judges, they should just be judges.' That has ceased to be a viable argument now that nonpartisan races have become so partisan that the only big difference is the label gets taken off of the ballot."

Another possibility is that partisan groups may be using political action committees to spend on behalf of partisan candidates, rather than giving them direct contributions.

That got much easier after the high court's landmark 2010 ruling in Citizens United v. Federal Election Commission

, which barred the government from capping independent expenditures — for example, campaign ads advocating for a candidate or issue — spent by corporations, nonprofits or other associations.

"A lot of these groups that were spending on these elections realized the return on investment was pretty good in state supreme court races," Kang said. "These groups saw this as a good place to spend their money. There's more bang for the buck."

"It's cheaper to buy a seven-member supreme court then an entire legislature," he said.