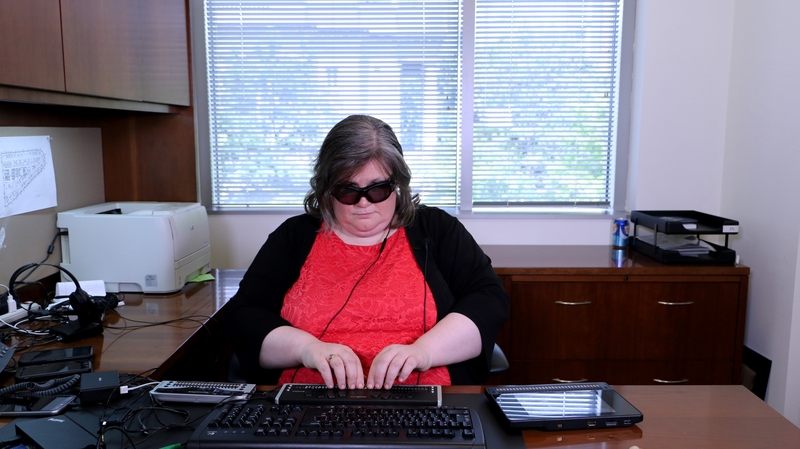 
Many attorneys with disabilities have faced barriers erected even by well-intentioned colleagues, having to fight for respect and equality.

Some have also found plum jobs at law firms and government agencies with supportive and positive cultures.


In connection with our special report on disability inclusion in the legal industry, Law360 spoke with a number of lawyers with disabilities about what they’ve experienced along their career paths.


Here are four of their stories.

“Blind” is not a dirty word, says Angela Matney, a Loeb & Loeb LLP associate who has never seen. Dirty words often masquerade as kind ones.


“For me, ‘blind’ is part of my identity, and it’s a way of being in the world, a way of experiencing the world,” she told Law360 at a recent interview at the firm’s Washington, D.C., office. “It means that when I read, I’m reading with my fingers. I’m touching the words. I’ve always kind of thought that braille must be one of the coolest ways to read.”

Matney, whose practice focuses on privacy and data security, communicates with most of her clients remotely, and her blindness rarely comes up. Technology ensures this. She uses a dynamic braille device dotted with rising and falling pegs to quickly read and reply to emails on her smartphone.


Technology has its limitations, though. Clients have sometimes emailed her screenshots during telephone conversations and asked her to have a look. Generally, only then does her blindness come up.


In person, however, she finds people treat her differently.


People often see her with her cane and assume she’s lost. This happened once when a new person was working at the information desk at the office building where she worked. The well-meaning attendant asked her where she was going, presumably trying to help, but on that day, it was just too much. “I’m going to work,” she snapped.


Matney’s father was a West Virginia coal miner who dropped out of school in the sixth grade, and both he and Matney’s mother ended their educations with general equivalency diplomas. Matney’s public school in the tiny coal town of Iaeger had few resources for a blind student.


By a stroke of luck, one of her mother’s childhood friends had earned certification in braille transcription and was looking for work as Matney entered kindergarten. The school district hired her to teach Matney how to feel words.


Many of the school’s books weren’t available in braille, however, so her father read them aloud for her. She has fond memories of her father’s voice guiding her through her physics textbook.


She went on to earn master’s degrees in mathematics and rehabilitation counseling in addition to her law degree.


The word “blind” hasn’t held her back. But there is a much prettier word that has.


“I’ve been called ‘inspirational’ for accomplishing such major feats as, you know, climbing stairs or answering the phone and hanging the phone back up on the base,” she said. “We’re not trying to be inspirational. We just want to — we are just ordinary people, you know? Like, I’m a blind person, but I’m also a mom. I have a job.


“Those sentiments have their roots in pity,” she said. “You may think somebody’s inspirational for climbing the stairs, but if you think that, are you likely to hire them?” 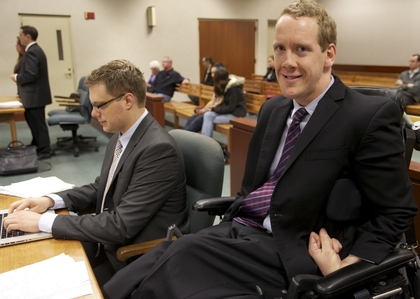 Sometimes, Ben Chater, a 34-year-old Vermont government attorney, has to remind people to give him the same opportunities as others and hold him to the same standards. That was the case when he took a litigation class at The University of Texas at Austin School of Law in 2010 that required students to deliver five oral arguments.


The class served as good practice for Chater, who has since argued before the Vermont Supreme Court three times and tried five jury trials. It also helped him develop his advocacy style.


“So many attorneys use so many words, but they don’t really say anything,” he said. “I’ve always tried to be really efficient and purposeful and concise as I can with my language without sacrificing my meaning.”


Chater has used a power wheelchair since the age of 4, and he has about 10 personal attendants on various schedules who help him with eating, dressing and other daily needs.


Because Chater has the most precise control over his head and neck, one of the most important tools for his job is a padded plastic headband mounted with an aluminum rod that has a customized tip. The “headstick,” as he calls it, allows him to turn pages in books and type on his computer keyboard — about 30 words a minute — a process he’s documented in this video he posted to YouTube.


In 2012, he became a state prosecutor in Chittenden County, focusing on criminal and juvenile cases. Though there initially was a question of who would pay for Chater’s office assistant for secretarial and logistical tasks and personal support, his boss, former State’s Attorney TJ Donovan, eventually secured state funding to cover the cost.


In 2017, Donovan became Vermont’s attorney general, and months later, Chater decided he was ready for a change and took a job as an assistant attorney general handling health care eligibility appeals and child welfare cases. The attorney general’s office also agreed to pay for Chater’s assistant.


“A great part of being in Vermont is that it’s a small state, and the people here really want to do the right thing,” Chater said. “Creating the position for my assistant was not bureaucratically simple, but through the persistence and dedication of the folks I work with, it got done.”


Chater is used to forging new paths wherever he goes, and he tries to see that as an opportunity.


“I’ve always just felt like a normal guy,” he said, “but I have come to appreciate the fact that I am unique, and that does give me some power to make change.” 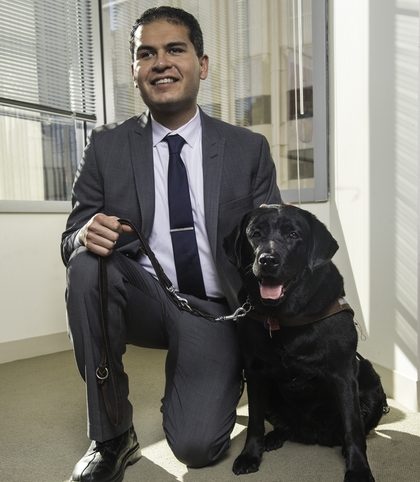 During law school, Michael Nunez became drawn to the intersection between civil rights law and technology issues, and it’s an area that has kept the litigation associate at Rosen Bien Galvan & Grunfeld LLP in San Francisco busy ever since.


Nunez, who is blind, handles employment matters and class actions, including helping to bring cases for blind groups that have resulted in major settlements.


In December 2016, he and other attorneys representing plaintiffs including the National Federation of the Blind of California gained approval for a nationwide class settlement with Uber Technologies Inc. over allegations that drivers violated the Americans with Disabilities Act by refusing rides to blind customers with service animals.


His firm also has been handling Armstrong v. Brown, a case alleging in part that the California prison system fails to offer inmates with disabilities equal access to certain programs. Although he’s not an attorney of record, Nunez consulted lawyers working on that case on concerns blind inmates might have, such as access to materials through prison libraries.


“When firms have a strong civil rights practice, it’s helpful to have attorneys who reflect the population they are working with and who are more familiar with some of the issues that population might be dealing with,” he said. “It’s so valuable to have representation from diverse communities at the table in a firm.”


Nunez uses a computer screen reading program to scan through case files and notes on his laptop. He likes to crank up the speed of the program to churn through documents at an accelerated clip. While the text that the program reads aloud may sound like gibberish to the average listener, Nunez has adapted to its pace, detecting voice changes for bolded text or tones for when a phrase is linked to a webpage.


“It’s a key tool in my arsenal of technology to do the work of a lawyer,” said Nunez, who was born with Leber congenital amaurosis, a genetic eye disorder. The 34-year-old walks with the assistance of a cane and has a service dog by his side — a black Labrador retriever named Peggy.


With a passion for endurance sports, Nunez likes to run, row and ski. He trains for half marathons with a running club, where he links himself to a guide with a two-foot tether, and the guide helps him navigate the route by calling out directions using descriptions of a clock face. 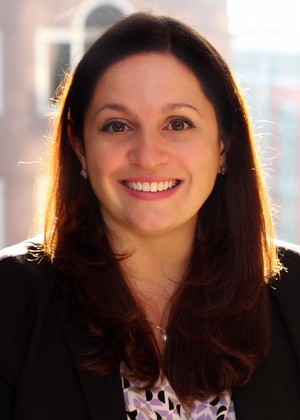 Kristy Avino was born with a hearing impairment. She earned her law degree from Boston College Law School and became a trial lawyer, eventually focusing on employment law.


She learned to navigate trials, though she was mostly deaf. Avino said she tried a case in Norfolk Superior Court, one of the older courthouses in Massachusetts with soaring ceilings and terrible acoustics. She spoke with the court reporter and arranged to have the transcript sent directly to her laptop in real-time.


It turned out to be the second act of a genetic disorder the McCarter & English LLP associate didn’t know she had — Usher syndrome. She has used technology such as screen readers and speech-to-text programs to keep working. She now advises clients on employment matters.


“My vision loss has been gradual, so it has been something I have been able to adapt to with technology,” she said.


She said the advances in accessibility technology have been "tremendous" over the past decade, and clients typically aren't even aware she uses them.


Her hearing loss and deteriorating vision haven’t been an issue for her at McCarter & English; her bosses and fellow attorneys have been supportive and judge her on her value as an attorney. That tone, she said, is set at the top by the firm’s chairman, Michael Kelly.


But there’s more to life than work.


Avino has a family, including two small children. She is a college basketball fan and loves her Villanova Wildcats — her alma mater. She volunteers on a municipal commission for people with disabilities, educating businesses free of charge about creating accessible public spaces.


And she loves to travel. She recalled her first trip to Italy, when she stopped in Venice and stayed awake for nearly 24 hours observing the flow of the city — the most perfect 24 hours she could imagine. She fell in love with the architecture and the boats and dreams of going back.


“My disabilities,” Avino said, “are probably some of the least interesting things about me.”