A 'Blank Check' For Legal Aid Gets Harder To Cash

The cases were among the most rewarding of attorney Sharon Caserta's career: taking on hospitals, law enforcement, even the state Department of Children and Families when they refused to provide deaf members of the community with proper accommodations.

But the program that connected Caserta with those cases, a special litigation unit of Jacksonville Area Legal Aid in Florida, shut its doors in 2015 despite having no shortage of work. The biggest reason was a significant decline in the funding JALA receives from Florida's Interest on Lawyer Trust Accounts program, which pools the interest the state's attorneys earn on some money they hold temporarily for clients in order to fund civil legal aid.

Caserta left the organization for private practice in 2015 after grappling with unpaid furlough days and other budget woes.

"It got to be very difficult to continue that way," Caserta said. "I wanted to take cases which required a larger litigation budget, which Legal Aid just didn't have."

Caserta's experience is not unique. IOLTA programs across the country have been a major source of dollars for civil legal aid programs for decades, but anemic interest rates since the financial crash in 2008 have largely drained what was once a much deeper pond, leaving organizations that relied on that money high and dry and sowing a wide-ranging and lasting impact on civil legal aid services for the poor throughout the country.

A Modest Beginning That Grew Quickly

The program for deaf and hard of hearing clients in Jacksonville is one of many casualties in the 180-degree turn IOLTA funding has taken since the flush days when it provided a reliable revenue stream for organizations that had been used to scrambling for resources.

IOLTA, which was first implemented in the Sunshine State in 1981, collects the interest attorneys earn when they hold client money that is either small enough or held briefly enough that the cost of opening a separate bank account for it would exceed the interest it generates.

Instead, attorneys pool those client funds in a single account, and the interest it earns goes to that state's IOLTA program to fund legal aid services for the poor. Some states' programs are voluntary and some mandatory, and when a client's funds are large enough or held long enough to make a dedicated account worthwhile, that interest still goes to the client.

At first, the program was successful enough that by February 1982 the Florida Bar Journal was describing it as "a blank check for the public good."

Just two months after that rosy projection, the Federal Reserve raised interest rates three points to what now seems like a whopping 15 percent. As a result, revenue from the Florida program jumped from $202,657 in IOLTA's first year to over $19 million by the 1990-91 fiscal year, according to the Florida Bar Foundation.

Gradually, all 49 other states, the District of Columbia and the U.S. Virgin Islands followed Florida's lead, establishing their own IOLTA programs.

But that blank check became a lot harder to cash when interest rates plummeted following the financial crisis in 2008. That December, the Federal Reserve lowered its benchmark federal funds rate, which is the interest rate at which banks lend money overnight to other banks, to 0.25 percent, the lowest rate possible and considered to be effectively zero.

"For a while, we were thankful we didn't have to send money back to the bank," said Ed Marks, executive director of New Mexico Legal Aid.

While interest rates have inched up since then, they remain well below what they were during the program's heyday. An increase by the Fed in September, for instance, raised the rate to where it is now, between 2 and 2.25 percent. 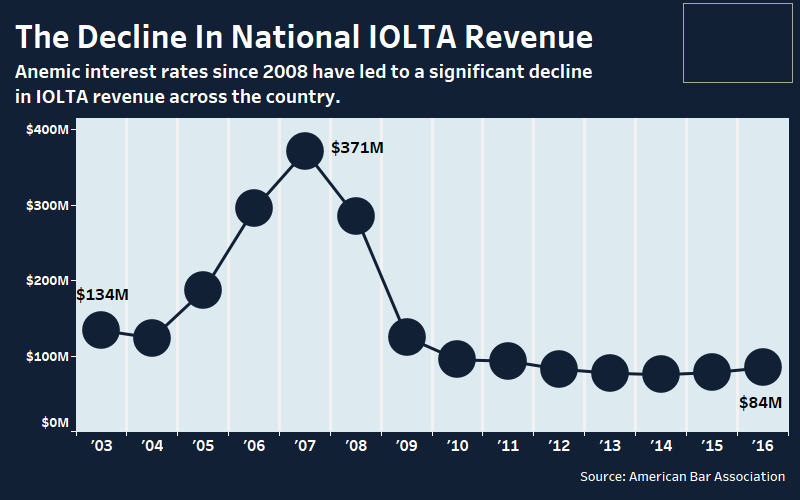 
The decline has been a "killer" for civil legal aid, since banks base the interest rates they pay on IOLTA accounts on the federal funds rate, said Betty Balli Torres, executive director of the Texas Access to Justice Foundation, which administers that state's IOLTA funds.

According to Torres, IOLTA revenue in Texas had been projected to reach $28 million for 2008, before the recession. Last year it was $7.82 million after falling to a low of $4.2 million in 2013.

The funding crunch in Texas is emblematic of what has been happening across the country. National IOLTA revenue peaked in 2007 at more than $371 million, according to numbers compiled by the American Bar Association. That number bottomed out in 2014 at a little over $75 million before a modest recovery to around $84 million in 2016.

"The past decade has very much been a test of resilience and of patience," National Association of IOLTA Programs President David Holtermann said, "because there were years where I think there was a real collective sense of, when is this going to end, when are things going to start to turn up?"

In Florida, for instance, the IOLTA program brought in $43.8 million in 2008. In 2017, it fell to $6.6 million, according to Donny MacKenzie, executive director of the Florida Bar Foundation. 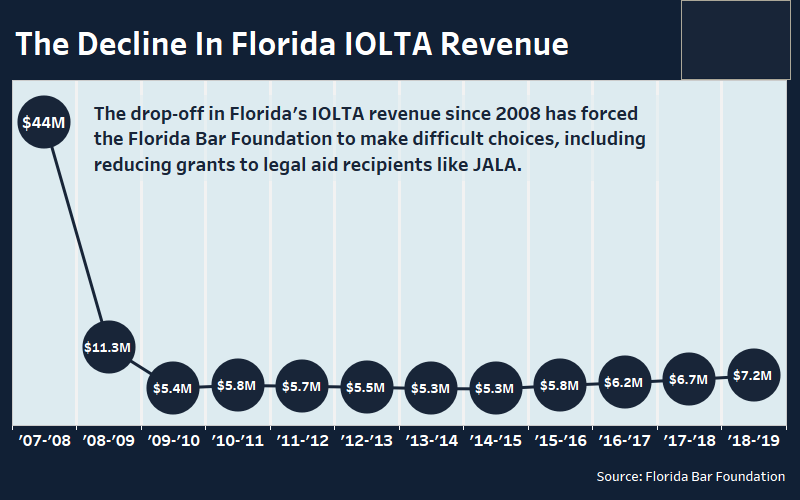 
The lower revenue has forced organizations like MacKenzie's, which parcels out Florida's IOLTA funds to legal aid groups, to reduce services and grants. The Florida Bar Foundation "saved for the proverbial rainy day" during the program's robust years and managed to avoid cutbacks at first, MacKenzie said, but "the rainy day has lasted a decade."

Those reductions, in turn, have cut deep for organizations like Jacksonville Area Legal Aid, said Jim Kowalski, the group's president and CEO.

So in 2013 JALA, which Kowalski said had laid off a fifth of its staff and furloughed others, stopped handling family law cases in order to focus on public housing cases. The organization also no longer handles general immigration work or even issues that involve private housing.

In Idaho, the Idaho Law Foundation has had to make similar choices, said Diane Minnich, the foundation's executive director. In 2008, Minnich's organization handed out $480,000 in IOLTA funds. In 2015, it doled out just $65,000.

"You just have to choose your priorities, and some of the things that you could do and that are very helpful but aren't on the high end, you can't do, for a little while," Minnich said.

Those cuts in services are coming in areas that can ill afford it.

Both Torres and MacKenzie pointed out that even when IOLTA funding was at its peak in 2007, only about 20 percent of the civil legal needs of poor people in their respective states were being met. Now they say it's only 10 percent.

"We have more poor people than we did a decade ago," Torres said.

Hunting for Other Options

Many legal aid programs are frantically trying to ferret out other funding sources to make up for the shortfall.

"In many respects, the horse is out of the barn in terms of that need to diversify," Holtermann said.

State IOLTA programs have also turned to the $16.65 billion settlement Bank of America made with the federal government in 2014 to resolve claims tied to the bank's behavior leading up to the mortgage crisis. As part of that deal, BofA agreed to donate money to the states' IOLTA organizations to be used in part for foreclosure prevention legal assistance.

Some states are turning directly to the banks themselves for help.

In Texas, TAJF convinced some banks to pay slightly higher interest rates on IOLTA accounts and not to assess service fees on those accounts. In turn, the foundation encourages attorneys to house their IOLTA accounts at those banks, and Torres says more than 60 banks have signed on.

Meanwhile, Idaho, New Mexico and several other states have introduced rate comparability rules, which require that the interest rates paid on IOLTA accounts be comparable to rates paid to non-IOLTA customers.

Other states have turned to court fees. New Mexico, for instance, has started tapping pro hac vice fees — fees lawyers pay in states where they are not licensed so they can handle certain cases there — and now blends that money with its IOLTA program, according to Marks. Indiana, meanwhile, instituted a $1 fee on each civil legal filing to generate funds for civil legal aid, according to the ABA.

"It doesn't make up for it by any stretch of the imagination, but nonetheless it truly does help," Torres said.

While that legislative funding has mitigated some of the crisis, it often comes with restrictions, such as limiting its use to cases involving domestic violence or veterans.

"We see somebody who doesn't meet the grant criteria that still has a very daunting, life-threatening, life-changing problem we could help with if only we had the funds. And IOLTA funds have been very important because they tended to carry fewer restrictions," Marks said.

The good news for legal aid groups is that IOLTA revenues have started coming up slightly over the last few years as interest rates have crept back up.

The Fed's rate increase in September was the third one this year and the eighth since the financial crisis. As a result, the Florida Bar Foundation, for example, has seen its IOLTA revenue rise from $6.2 million in 2016 to $7.2 million projected for 2018.

Most legal aid organizations seem to recognize that despite the early stirrings of a rebound, IOLTA is unlikely to ever get back to where it was. And, even if it did, the program will never be able to close the justice gap on its own.

"There needs to be changes to the way legal aid is funded, because in Texas, for example, 10 percent of the civil legal needs of poor Texans are being met, and IOLTA will never fill that gap. I don't care where interest rates go," Torres said.

But all of them say the program is still an important part of legal aid funding and want to see it continue.

Those pennies of interest that would have otherwise been paid to lawyers' clients "would've meant very little to them, but ... when all of that is combined together, it can mean the world to a legal aid program like ours," Marks said.

Jack Karp is an editor at Law360. Editing by Brian Baresch.