From Showdowns To Hotlines, Frazzled Judges Get Creative 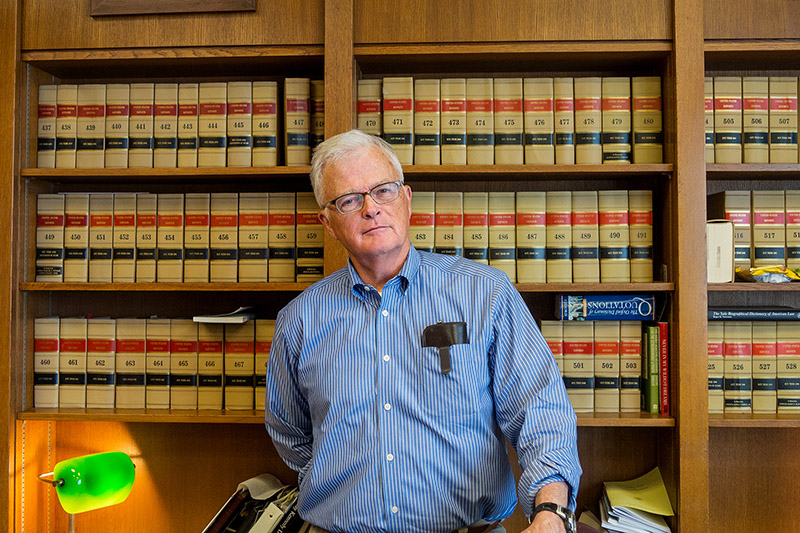 U.S. District Judge William Alsup has implemented so-called litigation showdowns to manage his docket in the Northern District of California, which has the 13th-highest caseload in the country. (Sara Jeong | The Verge/Vox Media)


Perched at his bench in San Francisco, U.S. District Judge William Alsup rubbed his forehead and complained that attorneys in litigation over streaming TV technology were "throwing patents around like they're candy."


Comcast Cable Communications LLC's set-top TV Everywhere boxes were accused of infringing 13 of OpenTV Inc.'s interactive video patents. As the case progressed, its workload mounted. The judge said so many boxes of evidence surrounded his law clerk's desk that "it looks like an igloo." The lawsuit had a whopping 120 infringement contentions.

"That alone was not feasible, even if I had nothing else to do for a year," Judge Alsup later told Law360.

Then, during a 2017 case management conference, he had an epiphany. He would hold a showdown.

OpenTV would set its sights on the strongest example of infringement, and Comcast would take aim at the most invalid claim. If the judge sided with OpenTV, the company could seek an injunction to take Comcast's infringing products off the shelves. But if Comcast won, Judge Alsup warned OpenTV, "it's sanction city."

"We're going to start doing it one claim at a time, until one of you is shown to be ridiculous," Judge Alsup said, peering down his glasses at the attorneys. "There will be some skin in the game here."

"It avoided a lot of litigation," Judge Alsup told Law360 during a February interview in his chambers. The innovation, he said, was "just one single judge trying to make a stab at managing one of these messy cases."

The unusual technique, which he's used in two other lawsuits, has saved Judge Alsup time, and time is a precious resource in the Northern District of California. The court has the country's 13th-highest workload, with an average docket of 637 weighted cases per judgeship, which far exceeds the Judicial Conference of the United States' recommended workload of 430.

"We have six hearings on an easy day," Judge Alsup said.

In federal courts across the country, filings have ballooned by at least 38 percent since the early 1990s, while the bench has only inched up by 4 percent in that time. Litigation wait times have increased dramatically as a result.

In an effort to prevent dockets from stagnating, some districts have become incubators of case management innovation. Among them are many of the nation's most overburdened courts.

'Energy in the Building'

In August 2017, Richard Saraf of Kenney Shelton Liptak Nowak LLP got an order announcing one of his cases had been selected for the Western District of New York's "Settlement Week" program. The parties would show up to the Rochester courthouse and negotiate, the order said, and the clerk's office would pay for the first few hours of mediation.


Saraf doubted the case would settle. The gender discrimination suit filed against his client, the town of Pittsford, had dragged on for more than three years and had already gone through an unsuccessful round of mediation.

We probably would still be waiting for a trial date now if we didn't resolve it.

Yet after a few hours at the Settlement Week proceedings, the parties reached a deal. Then they walked upstairs to a courtroom, where the district's chief judge, U.S. District Judge Frank Geraci, put the settlement on the record.

"The plaintiff got it out in front of everybody, and for the first time, I think she was really heard. She sort of got her day in court with the mediation," Saraf said. "We probably would still be waiting for a trial date now if we didn't resolve it."

The Western District's four-judge bench is responsible for more than 4,000 pending cases, and it takes an average of 62.4 months for a civil suit there to get to trial. Yet, the district is seventh in the nation for closing cases, with each judge averaging 818 terminations last year.

"We've had to undergo a number of innovative programs because we have one of the most congested courts in the nation," Judge Geraci said. "We are very proud of the fact that we are a leader in terminations."

He credited the district's initiatives addressing substantial pro se and Social Security litigation backlogs, its practice of borrowing judges from the less burdened District of Vermont, and Settlement Week.

During the 2017 program, the court offered three hours of pro bono mediation to 74 cases that had been pending more than three years, 53 of which quickly settled.

"There was a kind of energy in the building. The parties showed up. The mediators showed up. We gave them Danishes and coffee, so they were in a good mood," Judge Geraci said. "There were no trials or hearings. Everyone was there for mediation."

This focus on managing caseload has its detractors. Steve Susman of Susman Godfrey LLP worries it's the reason civil trials are disappearing.


In 1962, the average federal judge tried 10 civil jury trials and 11 bench trials. As of 2017, those numbers had dropped to below four jury trials and one bench trial per year, according to the New York University School of Law's Civil Jury Project.

"What do we need more judges for? Walk the halls of a federal courthouse and see how many courtrooms are dark, see whether there's a trial going on," Susman said. "It's harder to get cases to trial, but not because judges are too busy. It's rather, in my opinion, because for the last 30 years, the focus of federal judiciary has been on efficiently managing dockets, not by trying cases, but by throwing them out."

We really are losing the ability to try cases, because lawyers just never do it.

Arizona's U.S. District Judge David Campbell said he was trying to address that very problem when he began offering an expedited trial alternative. The streamlined schedule eliminated motion practice and either nixed or limited discovery, sending litigation to trial within six months of filing.

But during the four years Judge Campbell offered the expedited schedule, not a single lawsuit used it. Judge Campbell suspected most lawyers were leery of trial since they usually "either win on a motion or settle."

"Even those willing to try cases are risk-averse. They think, 'I can't go to trial unless I turn over all the stones,'" he said. "I found it frustrating and discouraging. We really are losing the ability to try cases, because lawyers just never do it."

But Judge Campbell, who chairs the Judicial Conference's Standing Committee, said other programs in his district have fared better.

He cited a local rule requiring that defendants call plaintiffs before filing motions to dismiss, to save the procedural runaround that often only results in amended complaints. He's also mandated that parties write letters outlining their arguments before filing for summary judgment, so he can help them focus their motions.

And a pilot project instituted in both Arizona and the Northern District of Illinois requires parties make substantial disclosures — including admissions of unfavorable evidence — early in the case.

The program is meant to "curb discovery abuses," according to Tim Hudson of Tabet DiVito & Rothstein LLC, who sits on a Chicago Federal Bar Association advisory committee for the pilot program.

"Neither lawyers nor parties enjoy disclosing bad facts," he said. "But one of the most common complaints among lawyers is the gamesmanship too often employed in discovery, in which relevant information is withheld unless the other side crafts its requests with near-omniscient precision."

Texas attorney Clyde Siebman of Siebman Forrest Burg & Smith LLP was both thrilled and chagrined, when, during an out-of-state deposition, a corporate representative for the other side confirmed the existence of documents he needed. Siebman finally knew the evidence existed. He also knew that tracking it down could be a nightmare.

Chair of the Court Administration and Case Management Committee

Instead of waiting for a discovery motion to be decided, then traveling out of state again, Siebman wanted the documents brought across town from the company's headquarters during the deposition's lunch break. His opponent resisted this proposal.

So they called the Eastern District of Texas' discovery hotline, a phone manned by a magistrate judge who settles evidentiary disputes on the spot.

Both sides argued their cases, and the judge found in favor of Siebman.

"Under a traditional system, we would have gone through a monthlong motion process and gotten the documents six weeks to two months down the road. That's an ordeal," he said. "Instead, it's resolved in 10 minutes, with huge cost savings on both sides."

The Eastern District was long considered a "rocket docket" that adjudicated cases quickly, ushering in a wave of litigants. That reputation has since fizzled, first because the speedy reputation ironically clogged the courts, then because the U.S. Supreme Court's TC Heartland ruling limited where plaintiffs could file.

The dial-a-judge program was born during the 1990s, after the 1990 Civil Justice Reform Act mandated federal district courts implement "civil justice expense and delay reduction plans."
Studying these programs' success in a few districts allows the Judicial Conference to evaluate whether unusual case management techniques should be implemented nationwide, according to U.S. District Judge Audrey Fleissig, the chair of the Court Administration and Case Management Committee.

"Pilot projects are like the judiciary's test kitchen," she said. "The judiciary has a chance to gather data, learn from the pilot courts' experiences and identify if and how the practice would need to be adapted."

Judge Alsup's showdown hearings probably won't catch on any time soon. He called the technique "an experiment to manage this monster problem."

"I don't think any other judge has tried my approach," he said. "Things like this take a long time to develop."

Cara Bayles is a feature reporter for Law360. She is co-author of our In-Depth report on the lack of new federal judgeships. Follow her on Twitter. Additional reporting by Dorothy Atkins. Editing by Jocelyn Allison, Katherine Rautenberg and John Campbell.