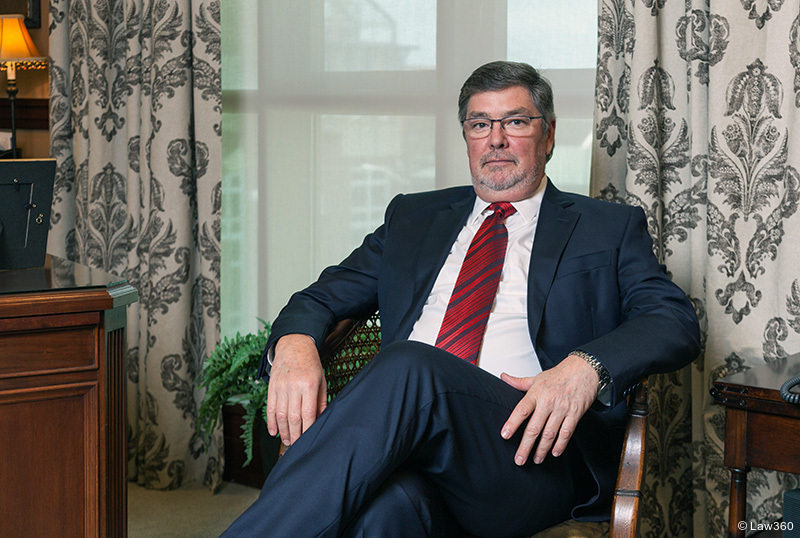 U.S. Magistrate Judge Patrick Hanna saw his workload skyrocket in 2018 when most of the courthouses in the Western District of Louisiana were operating without a single Article III judge. (Phil Brown | For Law360)


When the northern snows melt, the Mississippi River swells to resemble a python that swallowed a wallaby as the bulge travels through it, finally surging into the Gulf of Mexico. That's the image that comes to mind for U.S. Magistrate Judge Patrick Hanna as he reflects on the mass of cases that choked courts along that serpentine river last year in the Western District of Louisiana.


From November 2017 to October 2018, most of the district's courthouses didn't have a single Article III district judge. The district's six magistrate judges' workloads exploded.

"My normal, if you will, civil motion load in any given month is 40 to 60 pending civil motions — never mind habeas and criminal and all that stuff," Magistrate Judge Hanna said. "In September, it was 360 for me and my partner next door. … I told the chief, 'I'm not whining, I'm not complaining, we just can't do it. We're pedaling as much as we can.'"

It wasn't just the volume of work, though. He and the other magistrate judge at the federal courthouse in Lafayette also had to take on more complex duties, like consent cases, in which the parties agree to allow a magistrate judge handle dispositive motions and preside over trials. Parties in consent cases appeal directly to circuit courts.

Magistrate Judge Hanna said that back in 2011, before the Western District became short on district judges, he terminated 17 consent cases with a total of 103 motions. In 2018, he and one other magistrate judge terminated a total of 57 cases that included 530 motions, 618 orders, and 141 pretrial conferences.

Beyond consent cases, they decided numerous potentially dispositive motions using reports and recommendations, which are essentially orders that require the approval of a district judge.

Magistrate judges, whose job was created in 1968 to help district judges with their workloads, have hit their limits in some districts as judicial vacancies go unfilled and the number of total authorized judgeships in each district hasn't been comprehensively updated in decades. 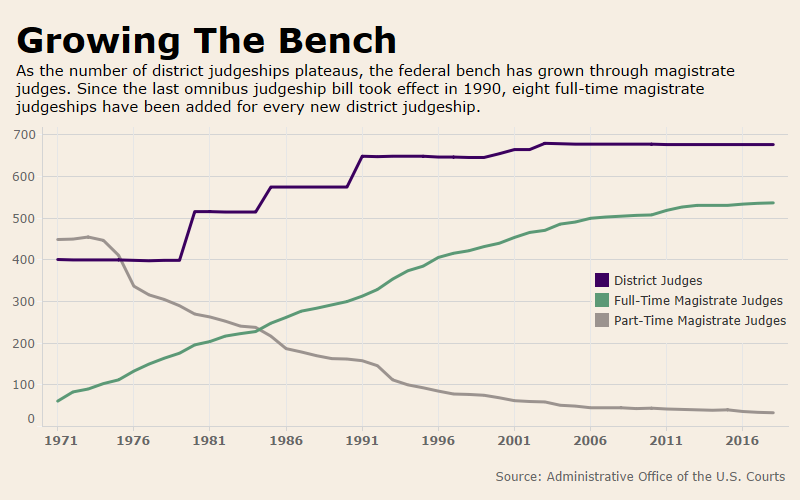 Their statutory limitations can create inefficiencies, however. Reports and recommendations that parties object to require de novo review from a district judge.

Yet magistrate judges must meet higher minimum qualifications than their congressionally confirmed counterparts. District judges technically need not even hold a law degree. Magistrate judges are required to have spent at least five years practicing law, and many of them exceed that. They are selected by Article III judges for renewable, eight-year terms, and earn about 92 percent of district judges' salaries, according to the Federal Judicial Center.

"Magistrate judges, on the whole, are capable, qualified and do good work," said Charles Gardner Geyh, a law professor at Indiana University Bloomington Maurer School of Law. "But in situations where you have really acute work shortages, it doesn't really matter whether you have only magistrate judges or only district judges minding shop. The shop is understaffed."

If Louisiana is shaped like a boot, Judge Hicks' sprawling but sparsely populated Western District would include the cuff, the heel, and most of the arch. The Middle District wraps over the instep to include state capitol Baton Rouge, and the Eastern District, seated in New Orleans, stretches from the end of the arch to the toe.

To go from the Western District's remote Shreveport in the north to Lake Charles in the southwestern corner and Lafayette in the southeastern corner is to make a more than 200-mile drive. It takes up to four hours each way, under the best conditions.

When a federal court begins to sag under the burden of its cases, civil litigation is a casualty. Courts are obligated under the U.S. Constitution and the Speedy Trial Act to handle criminal cases rapidly, so other matters, especially complicated civil motions and cumbersome civil trials, wind up delayed.

The Western District is allotted seven district judgeships, but retirements spanning from 2016 to the end of 2017 left it at one point with only two — Chief Judge Hicks and one other. As five judicial nominations remained pending in the Senate indefinitely, Judge Hicks called on magistrate judges and senior-status judges to help the district tread water.

"Judge Udj" became the nickname for the growing docket of cases assigned to "Unassigned District Judge." Magistrate judges handled all of Judge Udj's motions, while the district judges and some of the senior judges took turns acting as the duty judge for those cases.

If one of Judge Udj's cases was ready for trial, parties would be faced with the choice of consenting to trial by magistrate judge or accepting an indefinite delay — maybe a few months, maybe a year.

Magistrate Judge Hanna said he tried to get lawyers to commit to trials at least a quarter ahead to keep up with the nonstop onslaught of cases.


As the consent trials and requests for reports and recommendations picked up, nothing else slowed down.

"In addition to that, we had the normal criminal docket," Magistrate Judge Hanna said. "The bad guys weren't getting religion. They were still being bad guys, and we had our normal duties."

Judge Hicks and the other two district judges criss-crossed the western half of the state regularly to handle criminal cases, first and foremost, and then some civil cases as they could.

"We kind of felt like first-year lawyers who had the traveling associate kind of routine," Judge Hicks said.

When judges couldn't travel, often everyone else had to.

Douglas W. Truxillo, a veteran maritime lawyer for Lafayette-based Onebane Law Firm PC, said that parties sometimes wouldn't or couldn't have a magistrate judge preside over their trials. In those cases, the lawyers and witnesses had to make the trek across the state to Shreveport, where the judges normally sat.

Attorneys grew wise to the delays and took their business to Texas or elsewhere in the Pelican State. Truxillo said far fewer maritime cases from the Gulf of Mexico seemed to wash ashore in Western Louisiana. He had to start taking a greater share of intellectual property and medical benefits cases to stay busy.

"People were filing elsewhere rather than here. That's had an impact, I think, on the lawyers' practices here," he said.

Truxillo had nothing but praise for the jurists who did all they could to keep their heads above water. He reserved his exasperation for Congress and the delays in the judicial confirmation process.

"I was so afraid that some of these [nominees] would just say, 'OK, forget it,' and we'd have to start the whole process all over again," he said.

As his magistrate judges and senior judges tried to stay afloat, Judge Hicks asked for help from neighboring districts. He was able to pass 25 cases to the state's Middle District and 50 cases to the Eastern District.

Some relief came last March, when the Senate confirmed Judge Terry A. Doughty, who previously served as a state judge, to the federal courthouse in Monroe, Louisiana. Judge Doughty was sworn in on a Friday and presided over his first federal trial the following Monday, Judge Hicks said.

The Western District of Louisiana caught another lucky break in September and October, when the Senate confirmed two district judges for the Lafayette courthouse. Two more vacancies remain, however, with only one nominee pending.

Judge Hicks reflected on how difficult it would have been if anyone in his courthouses weren't there to help.

"I am aware of lawyers' complaints about not getting things as fast as they used to," he said. "But nonetheless, you make do with what you have."

Drinking at the Fire Hydrant


U.S. District Judge Joseph Bianco seems poised to take a seat on the Second Circuit. His departure would add to the four judicial vacancies in the district that have been pending for at least two years now. Even if the district's bench was fully staffed, it would need more resources, according to the Judicial Conference of the United States, which last week recommended adding two more judgeships there.

The court, operating with just 11 active district judges, has leaned heavily on magistrate judges to fill the gaps.

Magistrate judges in the Eastern District handled 27,675 civil pretrial matters last year, more than any other district in the country, according to the Administrative Office of the U.S. Courts. The runner-up is the District of New Jersey, where magistrate judges handled 16,828 matters.

Judge Bianco is one of only two active district judges at the Central Islip courthouse on Long Island. His caseload was going to be left to U.S. District Judge Joan Azrack, four active senior judges and five magistrate judges.

District Executive Eugene Corcoran told Law360 this is the reality of the vacancy crisis in the Eastern District.

"It is only through the efforts of those retired senior judges who continue to work, and our magistrate judges, that we are able to keep up at all," he said in an email. "It is undoubtedly true that the caseloads for magistrate judges are affected by the large number of vacancies."

The staffing shortage in Central Islip has grown so dire that as Judge Bianco's nomination moved out of committee and to a floor vote earlier this month, the court began quietly reassigning hundreds of cases from his docket to judges based in Brooklyn.

In the Western District of Louisiana, Magistrate Judge Hanna said the new district judges have made his caseload easier to bear. That surge of stuck cases has begun to move along.

The courthouse in Lafayette, where Magistrate Judge Hanna works, now has U.S. District Judges Robert R. Summerhays and Michael J. Juneau. The new district judges are making headway on the heap of cases that piled up before their confirmations.

"Of course," Hanna said, "they're still drinking at the fire hydrant."

Brandon Lowrey is a features reporter for Law360. He last wrote about the role crowdfunding plays in civil justice. Follow him on Twitter. Additional reporting by Cara Bayles. Editing by Jocelyn Allison, Katherine Rautenberg and John Campbell.