Over the past decade, many New York judges, including three on the state's highest court and top court administrators, didn't publicly report outside compensation and gifts over $150 to their clerks, violating an ethics rule that safeguards against financial conflicts of interest and corruption.

Law360 contacted 130 clerks' offices in all 62 New York counties, including county clerks and clerks of the trial and appeals courts, in search of the mandated annual "public reports" on extrajudicial income. In half of the counties, court officials could not find a single report related to Rule 100.4 of the judicial conduct code since 2010.

The mandates under the Rules of the Chief Administrative Judge are intended to guard against financial conflicts by requiring that every full-time judge "report the date, place and nature of any activity for which the judge received compensation in excess of $150," as well as the name of the payor and the amount received. Any gifts valued over $150 must be reported the same way.

Many judges do report payments over $1,000 as required in a separate annual financial disclosure form, but experts said the widespread lack of compliance with the more detailed Rule 100.4 leaves a worrisome gap, depriving the public of information on who has given a judge something of value — whether it be thousands of dollars in rent or hundreds of dollars' worth of World Series tickets.

"If somebody got me something that was $750, that's significant," said Ron Minkoff of Frankfurt Kurnit Klein & Selz PC, who analyzed New York's judicial conduct code for the state bar association. "In some countries, the way it works is that whoever takes the judge out to the fanciest dinner wins. We don't want it to look like the courts are a bazaar or that a judge is available to the highest bidder."

The standard annual disclosure form would not capture, for instance, a gifted $895 Movado watch that Justice Antonio Brandveen of Long Island dutifully reported in 2017. Nor would it show the full list of establishments that Justice Arthur G. Pitts properly reported collectively paying him $12,000 over seven years for playing the piano.

The standard form explicitly omits the names of any tenants, customers or clients who are paying a judge. In stark contrast, Rule 100.4 requires that information. The form also allows vague income ranges, while the rule demands "the amount" received.

Responding to Law360's findings, the Office of Court Administration acknowledged a shortfall in Rule 100.4 compliance and promised reforms, including the creation of a single, standard reporting form.

But in an internal memo in March, court administrators noted that the rule is already taught in "new judges school." The memo, which was obtained by Law360, said more must be done to "ensure that judges are aware of this requirement."

The problem is not new.

The New York State Commission on Judicial Conduct, which is empowered to discipline or remove judges for misconduct, warned the OCA 25 years ago that "many full-time judges do not comply with this requirement, either because they are unaware of it or because they wrongly assume the requirement is met by the filing of an annual financial disclosure statement."

The commission has disciplined judges for failing to comply with the ethics rule.

In 2020, Family Court Judge Richard H. Miller II was removed, in part, for failing to report $38,600 in rental income and $27,388 in income from past legal work under Rule 100.4. Investigators also found Miller sexually harassed a court official and had omitted income on his taxes and the annual disclosure form.

There are pockets of compliance with the rule in New York — even in counties with very few judges — which further suggests that state judges in the larger and more august halls of justice may be failing to report pricey gifts they are receiving and money they are making on the side.

New York City saw few filings from its nearly 500 judges: Just five judges have filed a total of nine reports in the past decade.

Few judges filed the required public reports with their clerks for gifts and extra-judicial income over $150. In New York City, where there are nearly 500 active trial judges at any time, only five have filed since 2010.

The problem appears to stretch to the top of the judiciary.

Three of the four major appellate divisions — encompassing Manhattan, the Bronx, and all of upstate and western New York — found just one report each in the past decade. By comparison, the Second Department, which includes all of Long Island and areas immediately north of the city, found 18 reports.

There is no sign of any public reports at New York's high court. The clerk of the Court of Appeals told Law360 that "no such records were found on file."

Law360 found that three of the seven judges now on the high court failed to file Rule 100.4 public reports despite declaring outside income in their general annual disclosures.

Over three years, Judge Jenny Rivera received between $30,000 and $80,000 for teaching at CUNY Law School and the Judicial Institute, which trains state judges. Judicial Ethics Advisory Committee opinions state — and OCA does not dispute — that her income should have been reported under the rule.

Judge Michael J. Garcia's Bahia Beach condo in Puerto Rico, nestled among the island's most expensive real estate, brought in $20,000 to $60,000 in rental income in 2020. Judge Rowan D. Wilson's ski slope condo at Smugglers' Notch mountain resort in Vermont netted him between $20,000 and $80,000 during four years while he sat on the high court. 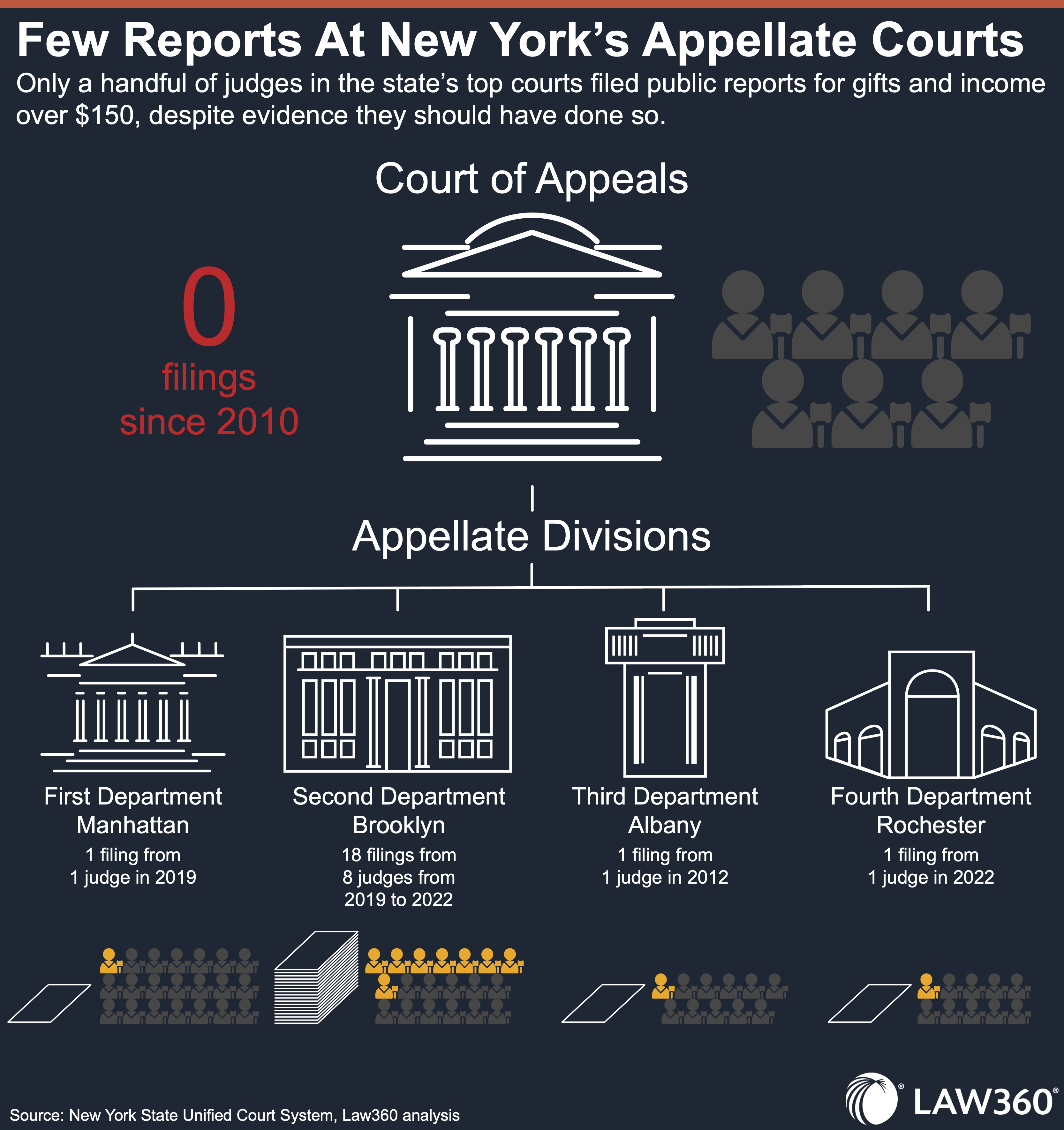 No judge filed a Rule 100.4 report — which would have included more detail, such as the names of tenants — despite the plain language of the mandate, which ethics experts told Law360 indicates that rental income should be reported.

That position is supported by the Commission on Judicial Conduct's charges against Justice Miller as well as a 2021 advisory opinion that noted the only reason an inquiring judge needn't report his rental income was that it fell below $150.

"Judges Garcia and Wilson should absolutely report rental income," said James Sample, Hofstra Law professor and co-author of "Judicial Conduct and Ethics." "The reason that they should do so is so that there can be scrutiny and transparency that serves to promote rather than undermine judicial integrity and the perception thereof."

Law360 sent questions to all seven Court of Appeals judges about their compliance with the rule. The judges declined to answer direct questions about whether they had failed to report gifts or income over $150 during their judicial tenure or whether they planned to comply with the rule, according to spokesman Chalfen.

Lawyers for the Office of Court Administration, which is led by Court of Appeals Chief Judge Janet DiFiore, responded to Law360's inquiries with a legal analysis. OCA argued there was no need for the court system's top judges to report "investments" and that investment income need not be reported because it is "passively earned," citing an advisory opinion.

Chalfen said Wilson and Garcia's rental income counted as investments and therefore did not need to be reported. He cited no authority.

Remarkably, court records show that both judges not only knew about Rule 100.4 and agreed that rental income and payments for past legal work should be reported, they passed judgment on Justice Miller for failing to do the same thing.

Even as Judge Wilson and Judge Garcia received money from their rentals, they heard oral argument from counsel for the Commission on Judicial Conduct describing Justice Miller's failures to file his rental and law firm income with his clerk. Both Wilson and Garcia then signed on to an October 2020 opinion rejecting Miller's appeal that condemned his failure to obey financial disclosure rules, calling his conduct "particularly troubling to this court."

The Miller opinion recounted how that judge failed to report his rental income and income from past legal work to his clerk under Rule 100.4, despite being reminded of his obligations.

Responding on behalf of the judges, Chalfen said that because Miller and the commission both agreed he had violated Rule 100.4 by not filing his rental income and legal income, the court had not made its own independent finding on the issue.

Experts rejected the idea that renting out a property and collecting rent is passive. "To the extent that OCA is interpreting the rule this way, I think that's incorrect," Minkoff said.

The list of high-ranking judges who failed to file under Rule 100.4 extends further.

General disclosures show that a large majority of OCA's executive team received income that should have been reported in more detail under the rule.

Chief Administrative Judge Lawrence Marks, the most senior judge directly overseeing the administration and operations of the court system, collected between $6,000 and $30,000 in book royalties from Thomson Reuters Corp. between 2015 and 2020. He did not file a public report.

Judge Norman St. George, deputy chief administrative judge for courts outside New York City, rented out his primary residence on Long Island for $1,000 to $5,000 in 2020. He did not file a public report.

Judge Deborah Kaplan, deputy chief administrative judge for courts inside New York City, collected between $1,000 and $5,000 from her New York Law School salary in 2015. She did not file a public report for that income until after Law360 made inquiries seeking the reports.

Judge Edwina Richardson-Mendelson, deputy chief administrative judge for justice initiatives, collected between $10,000 and $40,000 in rental income from her daughter between 2019 and 2020, according to her annual disclosure. She did not file a public report.

Kathie E. Davidson, dean of the state's Judicial Institute responsible for training judges, collected between $1,000 and $5,000 in speaking fees in 2016. She did file a public report for this income — five years late.

The administrative judges did not directly respond to Law360's questions about whether they had violated the rule by failing to report gifts or income over $150.

OCA responded with a statement: "Due to gaps in judicial education and training and serious disagreement over whether some of this information even has to be disclosed, these examples of compensation were not disclosed under [Rule 100.4]. Although disclosure under [Rule 100.4] will be duplicative of the disclosures made in their annual financial disclosure statements, the judges will now — if they haven't already — retroactively be disclosing any examples of compensation required to be disclosed under Part 100."

While OCA disputes that rental income is reportable under the rule, Court of Appeals Judges Garcia and Wilson and Deputy Chief Administrative Judges St. George and Richardson-Mendelson will decide for themselves whether to report that income.

One former judicial ethics watchdog likened failing to file the reports to a traffic ticket but said the lack of compliance was nonetheless "troublesome."

"Obviously, judges should follow the rules if they expect the people they judge to follow the rules," said Richard Emery of Emery Celli Brinckerhoff Abady Ward & Maazel LLP, who served on the Commission on Judicial Conduct for 13 years.

Minkoff said it shows that ethics duties are not a priority for the court system's leadership.

"If judges aren't complying with the rules, it's a problem," he said. "If judicial systems aren't encouraging the judges to comply with the rules, then that's a bigger problem."

Update: This article has been updated to clarify information about Judge Kaplan's disclosures.