What's In A Judgeship? More Than Meets The Eye

For many judges in federal court, the size of their dockets is more than double what court officials have deemed a manageable workload.

Last week, the Judicial Conference of the United States, which makes recommendations to Congress every two years on the need for additional judgeships, called for adding 73 permanent positions across 27 districts nationwide. All but three of those districts had average weighted caseloads above the recommended amount of 430.

When caseloads creep above that level, courts face difficulty maintaining their dockets, according to U.S. District Judge Roslynn Mauskopf, who helped come up with the recommendations as chair of the Judicial Conference's Subcommittee on Judicial Statistics. But in districts like Louisiana's Eastern, Indiana's Southern, Delaware and New Jersey, weighted caseloads are more than 900 per judgeship. The 430 benchmark was last updated in 2005 and affirmed again in 2015.

Cases are weighted for complexity. So, for example, a case involving a defaulted student loan is counted as 0.16, while an antitrust case is counted as 3.72 cases. The Judicial Conference last changed the case weights in 2016, based on survey responses from judges and national data that shows how time-consuming different types of cases are.

But it takes more than simply measuring judges' caseloads to see how districts are overburdened — wait times for trial, population growth and even geography come into play. So begins a complicated process to determine which of 94 districts should get the scarce and coveted resource of additional judgeships.


If the only factor in deciding how many judges are needed per district meant making sure each judgeship's weighted caseload didn't surpass 430, then there would need to be more than 120 additional judgeships, almost twice the amount recommended last week. But there are other factors to consider.

"If we could rely on putting these numbers in a computer and it spit out the number of judges a district needed, that would be nice, but Congress isn't going to leave that kind of decision up to a computer," said Russell Wheeler, a fellow at the Brookings Institution and former deputy director of the Federal Judicial Center.

Congress passed the last major judgeship bill in 1990. Since then, judicial ranks have grown about 4 percent while filings have soared by 38 percent. The number of filings climbed from about 265,000 in 1992 to 391,000 in 2018, according to data from the Administrative Office of the U.S. Courts.

Despite the new recommendations, Congress isn't likely to act. Partisan gridlock has kept Congress from adding new judgeships since 2003.


The recommendations, if adopted, would help bring the bench in line with modern population and caseload statistics, alleviating odd disparities that have arisen in how resources are allocated across districts.

For example, a judge in Indianapolis has more than three times the weighted caseload — 991 cases — than that of a judge in Pittsburgh, where the caseload is 304 per judge. Yet, the Western District of Pennsylvania has twice the number of judgeships, 10, as the Southern District of Indiana, with five, according to federal court data.

Vacancies introduce another wrinkle. While the caseload in Southern Indiana is high, all the positions are filled. Judges in Pittsburgh are inevitably working on more cases than the data shows, since four of their judgeship positions are vacant.

There are currently 129 federal district court vacancies nationwide. To address the shortage, courts use various stopgap measures such as relying on senior judges, who can choose whether to maintain a full docket, shrink their caseload or fully retire. They also rely on magistrate judges, whose jurisdictions are limited, and visiting judges, who serve in other districts.

Take the Central District of California, for example. Congress has approved 28 judgeships, but eight spots are vacant, so there are only 20 active judges, including one temporary judge. The district uses a mix of magistrate judges and senior judges to pick up the slack.

In past years, the Judicial Conference has recommended temporary judges as stopgaps, roles that have expiration dates; however, this year's recommendations didn't include any temporary positions.

"The judiciary has taken a comprehensive approach reflecting needs of districts across the country and these are long-standing problems that require a permanent solution, not a temporary one," Judge Mauskopf said. 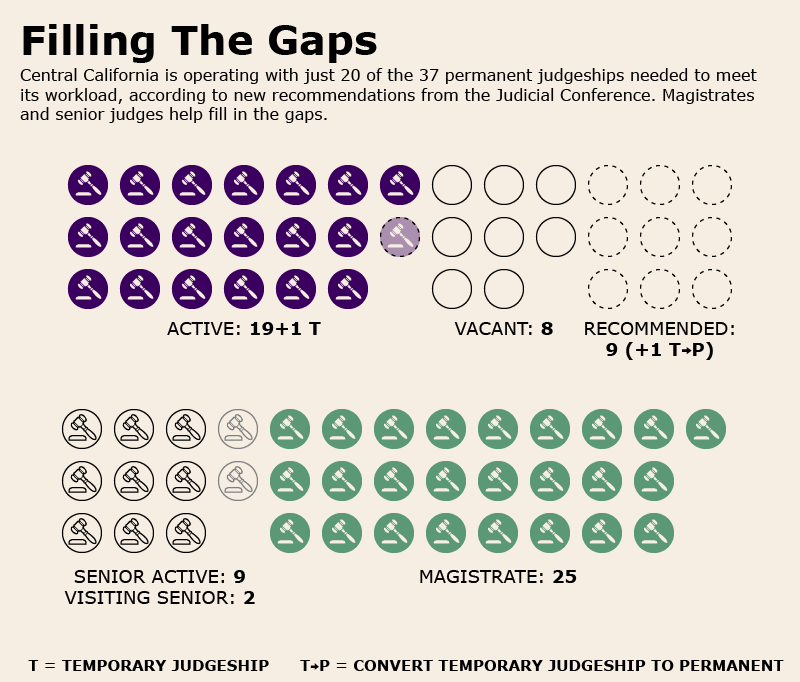 "The effects of this kind of caseload increase is profound. Increasing caseloads leads to significant delays in the consideration of cases, especially civil cases, which may take years to get to trial," Judge Mauskopf said.

In 13 judicial districts, the median number of months it takes to bring a civil case to trial is more than three years, meaning getting your case before a jury could take longer than getting a law degree. That includes New York's Western District, where civil cases can take more than five years.


Not everybody agrees on the need for new judgeships, however. Judith Resnik, the Arthur Liman professor of law at Yale Law School, noted that some districts have under 250 cases per judge, not including magistrate judges.

Since judges can sit by designation, judges in districts with low-weighted caseloads could be designated to help higher-volume districts, she said.

"Given technology, much of that work can be done from the judge's home base," Resnik said.

Amanda James is a data reporter for Law360. She last wrote about how the lack of identification impedes access to justice around the world. Follow her on Twitter. Graphics by Chris Yates. Editing by Jocelyn Allison, Katherine Rautenberg and John Campbell.