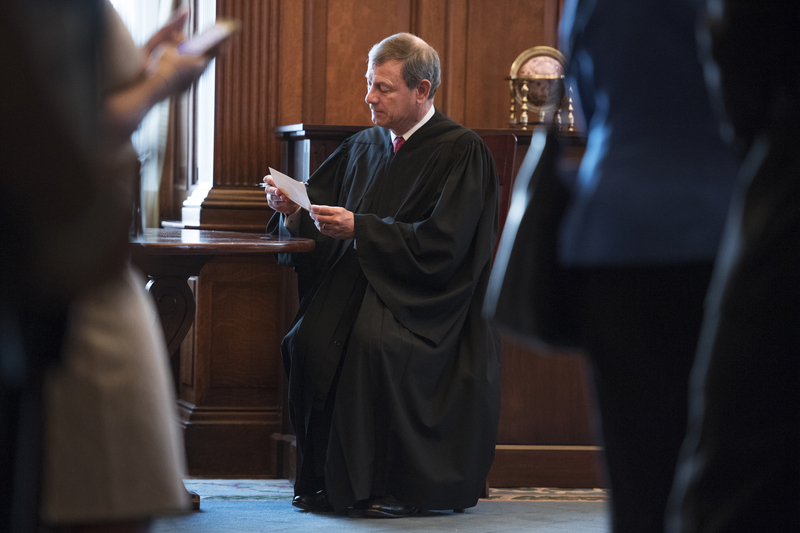 
Of the 21 cases where an identifiable precedent was overturned or altered during the Roberts court, most were divisive, 5-4 rulings, according to data from Washington University's Supreme Court Database. Most of the split rulings were about hot-button issues, and they were decided by a conservative majority.

"About 71% of overulings are 5-4 under Roberts, compared to about 31% under Rehnquist," he said. "That's a function of a court that is deeply divided along clear ideological lines and on most salient issues with big political stakes."

— the Roberts court struck down two of its own rulings issued only a few years before. About 2.2% of the court's rulings since Roberts took over as chief in 2005 have altered past precedent, which is just slightly behind the rate of his recent predecessors.

The fact that the Rehnquist court had a stable conservative majority for just shy of two decades has not deterred the Roberts court from striking down or altering eight of its precedents — more than from any other era. Listed here by the names of the decisions that altered them, most of the Rehnquist-era precedents were overturned or amended early in Justice Roberts' tenure.


The court's announcement Friday that it will examine a Louisiana law that would require abortion doctors to hold admitting privileges at local hospitals has court watchers speculating whether 1992's Planned Parenthood v. Casey

could be on the chopping block, continuing the direction the court seemed to be taking in 2008's Gonzales v. Carhart

Justice Ruth Bader Ginsburg, reading her dissent from the bench, called the Gonzales decision alarming and chastised the court for "blur[ring] the line, firmly drawn in Casey, between previability and postviability abortions. And, for the first time since [Roe v. Wade], the Court blesses a prohibition with no exception safeguarding a woman's health," Ginsburg said.

Austin v. Michigan held in 1990 that political speech could be banned based on the speaker's corporate identity, and in 2003, McConnell v. FEC

South Dakota v. Wayfair, which held that states could charge tax on purchases made from out-of-state sellers, even if the seller doesn't have a physical presence in the state, is one of only four times Roberts didn't vote in the majority in a precedent-altering opinion. Justice Ginsburg joined Justices Kennedy, Alito, Clarence Thomas and Neil Gorsuch in the majority, while Roberts sided with the liberals, Justices Stephen G. Breyer, Sonia Sotomayor and Elena Kagan.

The unusual lineup showed the justices wrestling with "confronting the complexities of defining physical presence in the Cyber Age," as Justice Kennedy wrote in the court's opinion.

Justice Roberts, dissenting, accused the court of "compounding its past error by trying to fix it in a totally different era … I would let Congress decide whether to depart from the physical-presence rule that has governed this area for half a century."

, raised hackles among the court's liberals about the conservative majority's approach to precedent. Both took aim at Burger court rulings.

, in which Justice Kennedy sided with the liberal minority to give it one of only three wins during Roberts' tenure, the court shook up a Burger court's decision that same-sex marriage was not a federal question.

"The right to marry is a fundamental right inherent in the liberty of the person, and under the due process and equal protection clauses of the Fourteenth Amendment couples of the same sex may not be deprived of that right and that liberty," Kennedy wrote.

, a 5-4 decision authored by Justice Alito limiting the ability of government worker unions to require fee payments from nonmembers to cover collective bargaining costs. Justice Kagan described the ruling as a "six-year crusade" to reverse the Burger court's Abood v. Detroit Board of Education


The Roberts court has altered or overturned just four precedents from the Warren court, which had a liberal majority. And yet, one of the most significant cases of Roberts' tenure which overturned precedent from that era, Bell Atlantic v. Twombly

, which held that a complaint shouldn't be dismissed for failure to state a claim unless the plaintiff could prove "no set of facts" would entitle him or her to relief.

, the court expanded Twombly's pleading standards to cover all civil cases in federal courts. The two cases are sometimes referred to as "Twiqbal", and together they dramatically changed litigation practice, handing defendants a new weapon to challenge lawsuits early on.

"After puzzling the profession for 50 years, this famous observation has earned its retirement," Justice David Souter wrote in Twombly's 7-2 majority opinion.

, holding that the mere fact a "tying" product is patented doesn't support a presumption of market power.

Another reversal grappled with a decision that has long been regarded as a shameful part of the court's past. In Trump v. Hawaii

"Korematsu was gravely wrong the day it was decided, has been overruled in the court of history, and — to be clear — has no place in law under the Constitution," Justice Roberts wrote in the 5-4 ruling for the conservative majority.

"In blindly accepting the government's misguided invitation to sanction a discriminatory policy motivated by animosity toward a disfavored group, all in the name of a superficial claim of national security, the court redeploys the same dangerous logic underlying Korematsu and merely replaces one 'gravely wrong' decision with another," Sotomayor said.