By David van den Berg
Law360 is providing free access to its coronavirus coverage to make sure all members of the legal community have accurate information in this time of uncertainty and change. Use the form below to sign up for any of our daily newsletters. Signing up for any of our section newsletters will opt you in to the daily Coronavirus briefing.


Law360 (April 24, 2020, 7:02 PM EDT) -- The IRS' request for recalled workers to provide their own face masks underscores the challenge the agency faces in getting the needed protective equipment for its employees as they begin to return to their jobs. 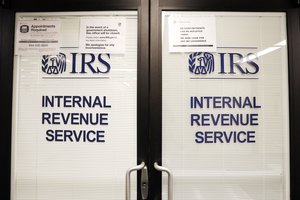 Nina Olson, the former national taxpayer advocate, said various factors made the current circumstances facing the Internal Revenue Service more intense than those it faced in the partial government shutdown of 2018-19, which closed offices including this one in Seattle. (AP)

In a Friday email disclosed by two House Democratic lawmakers, two Internal Revenue Service human resource officers said the agency would be recalling workers to mission-critical functions that have to be performed on-site starting Monday, and that the workers must supply their own face masks.

As the agency begins recalling workers and puts together a plan for reopening shuttered buildings, getting personal protective equipment for workers and disinfecting supplies is one of the primary challenges the agency will have to overcome, according to Chad Hooper, an IRS employee in Philadelphia and president of the Professional Managers Association, which represents agency managers. The IRS is competing with everyone else in the country for protective equipment and disinfectants, he said.

"Our association was notified at the beginning of March that the IRS may not be able to obtain PPE and disinfecting supplies for at least three months," he said.

Former National Taxpayer Advocate Nina Olson, who left the position in July, told Law360 that requiring employees to bring their own protective equipment to work would be irresponsible. Acquiring protective gear for employees is "absolutely the agency's responsibility," Olson said.

"You can't ask that of people," she said. "There's so much variety in what's out there."

The agency said in a statement Saturday that consistent with guidelines issued by the Office of Management and Budget and the U.S. Office of Personnel Management, it has requested, but not directed, several thousand employees to return to work and offered financial incentives. Returning employees will be required to wear face coverings and can wear any masks consistent with CDC recommendations, including those made from common household materials, the IRS said.

"The IRS also has been working to obtain PPE for our employees and expect many to be delivered as early as this weekend and upcoming week," the agency's statement said.

As a result of the COVID-19 pandemic, the IRS shuttered all of the agency's service centers and Taxpayer Assistance Centers, and is holding mail. The IRS has also directed much of its workforce to telework and suspended some enforcement actions.

Even before the IRS said it would recall workers, OMB and OPM issued a memo to agency heads saying the federal government was planning to ramp up operations following reopening guidelines that were recently released by the White House.

The memo said that in order to reopen, agencies must have in place procedures for screening people who enter facilities, which could include temperature checks, and provide sufficient hygiene supplies, such as disinfectant wipes, hand sanitizer and toilet paper.

Employees under age 65 and in good health can return to work based on local public health and agency instructions and in accordance with national guidelines, the memo said. Those workers can wear face coverings at all times in the workplace and agencies can either issue masks or approve cloth face coverings employees supply themselves, the memo said.

As employees return, taking the temperature of workers entering buildings will be essential, Olson said. The agency also should make preparations to close locations temporarily and quarantine workers in the event a worker contracts the virus, she said. Cubicle arrangements will also have to be adjusted to preserve physical distancing for workers, and layouts in which multiple workers use the same cubicle at different times won't be feasible without a large cleaning crew, she said.

The IRS said in its Saturday statement it will continue to follow or exceed federal safety guidelines including social distancing at all of its sites to protect workers' health.

Former IRS Commissioner John Koskinen said that he would expect all employees to be required to wear masks until the crisis eases and that visitors might be required to as well. Employees will likely not need other protective gear, except maybe gloves if they're meeting the public, Koskinen said.

The agency will need disinfectant materials in areas visited by the public, and those may not be so easy to come by, he said.

"At least in my area, disinfecting wipes and liquids are still hard to find and agencies clearly need to keep disinfecting hard surfaces, especially where the public is present," he said.

The resumption of face-to-face interaction among workers and with the public will also be challenging for the agency, Hooper said. Those meetings occur not only in offices but also in the field, at taxpayers' homes and places of business, where the agency won't be able to find out whether proper hygienic procedures are being used, he said.

The agency's workforce is also on the older side and some could be caring for parents at home, which means employees returning to any offices will be especially health-conscious, according to former IRS Commissioner Mark Everson, now vice chairman at Alliantgroup LP.

The agency's older workforce may mean more IRS workers will end up working at home for a longer period of time compared with employees of private companies, according to former IRS Commissioner Lawrence Gibbs, now at Miller & Chevalier Chtd.

Resuming work won't simply be a matter of flipping a switch, he said.

"It's going to take the service a long time to dig out of this, which happened during the middle of the filing season," he said. "And this is not like the end of the government shutdown when suddenly everybody comes back to work. There's going to be a phase-in here."

A partial government shutdown that started in December 2018 and ended in January 2019 was estimated to cost the IRS about $2 billion in tax revenue, much of which it would be unable to recoup, the Congressional Budget Office said at the time. Olson said a combination of factors, including workplace safety challenges, added workload from economic impact payments and other provisions of coronavirus relief bills, and work backlogs make the current circumstances facing the agency more intense than the shutdown.

It will be especially important for paper processing facilities to come back online quickly so the agency can resume work such as processing paper returns, amended returns and earned income tax credit audits, Olson said.

"I think the paper is essential to get people back very, very quickly because otherwise, the IRS will not dig itself out until the middle of next year," she said.

That could be complicated by a planned shutdown of an IRS processing center in Fresno, California, in September 2021, according to the National Treasury Employees Union, which represents IRS workers.

The COVID-19 pandemic interrupted what would have been the first round of buyouts and early retirements offered to employees at the IRS Fresno campus, as negotiated in the agreement between NTEU and the agency, according to Tony Reardon, the union's national president. The crisis has also slowed the progress of moving jobs that don't involve submission processing to Fresno to allow employees a chance to remain at the agency, Reardon said.

"NTEU believes the window should be extended and we continue our efforts to stop or delay the ramp-down," he said.

Update: This article has been updated to reflect the IRS' Friday email.