These Firms Have The Most Women In Equity Partnerships

For many law firms, efforts to close the gender gap in their top ranks have made only modest progress. But a number of firms are working to shake up that reality and forging a path to progress.

Law firms have consistently pledged to improve gender parity in their ranks. But significant change for female attorneys in a male-dominated profession — particularly at the top — remains largely elusive. The ranks of equity partners at law firms in the U.S. remain overwhelmingly male.

Our latest survey reveals that while nearly 40% of all attorneys at law firms in the U.S. are women, less than a quarter of equity partners are women, results that are essentially unchanged from last year's report.

Those numbers stand in stark contrast to the numbers of women who have chosen to pursue a legal education. Women have made up at least 40% of law school students for decades and now make up more than half, according to data collected by the American Bar Association.

Still, some firms have been able to make marked progress, and demonstrate the potential and possibilities of law firm efforts to work towards parity.

The firms on our Ceiling Smashers list have found ways to at least begin to improve the representation of women in the most coveted posts at law firms.

This year, for the first time, we welcomed the participation of firms that are based abroad but have a substantial U.S. presence of at least 50 attorneys. U.S.-based law firms had to have at least 20 attorneys to participate.

Some of the largest firms — including Morrison & Foerster LLP, Jackson Lewis PC and Ropes & Gray LLP — report that more than 30% of equity partners are women.

As a result, at many of these firms, a different image of what an equity partnership can look like is emerging, one where parity is possible. At firms such as Fragomen, Del Rey, Bernsen & Loewy LLP, for example, women represent half of all equity partners.

Here are this year's Ceiling Smashers — the top 10 firms in each law firm size category that are setting the pace for a legal industry working to close the gender gap at the top. 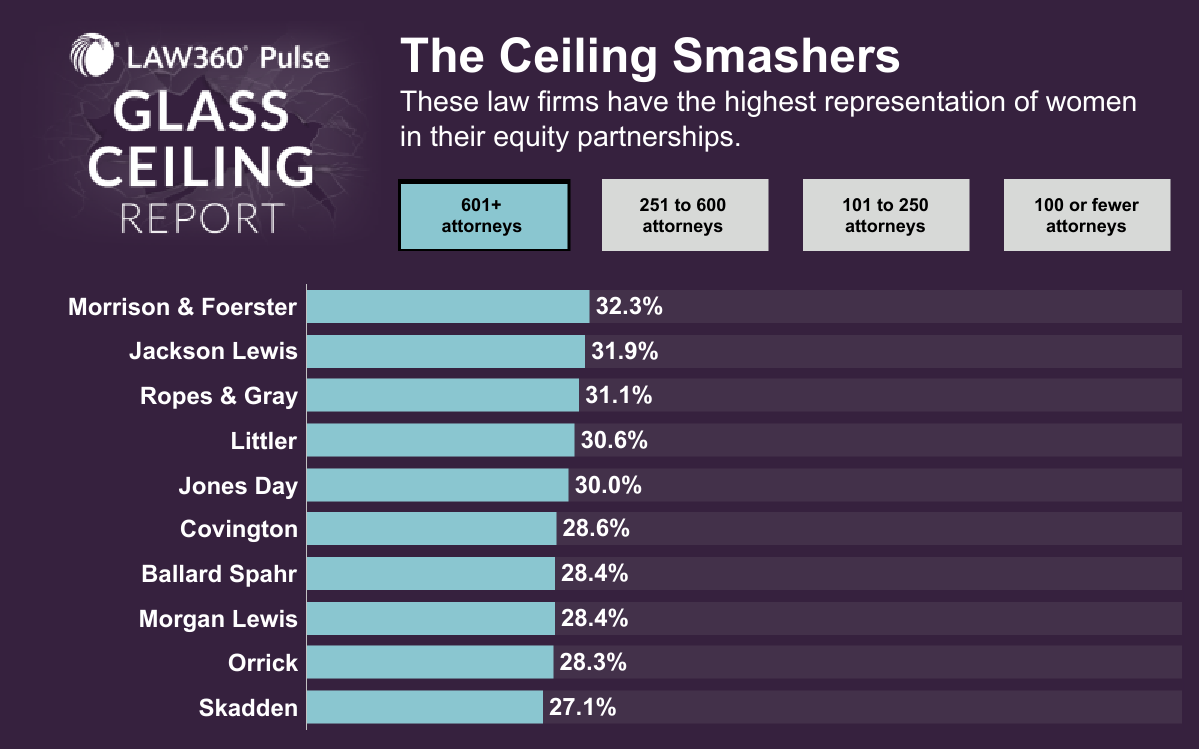