Earlier this year, Nateria Morrison had a leaky ceiling in her bedroom, faulty electricity in the living room, and a court date with her landlord.

What she didn't have was a lawyer, like an estimated 93 percent of Philadelphia tenants who find themselves in eviction disputes. Morrison knew her landlord wasn't doing something right, but she also knew she faced possible eviction over the rent payments she'd withheld in hopes of getting him to repair her apartment. Courtrooms make her nervous, but she couldn't afford an attorney.

When tenants like Morrison go unrepresented, they end up evicted or otherwise displaced 78 percent of the time. According to a report commissioned by the Philadelphia Bar Association and released last week, residents of the poorest major city in the country are evicted at a rate 150 percent higher than the national average.

But the PBA hopes to bring that eviction rate down by convincing the City of Brotherly Love to provide low-income tenants with legal counsel in eviction proceedings. Its report, conducted pro bono by Stout Risius Ross LLC and titled "Economic Return on Investment of Providing Counsel in Philadelphia Eviction Cases for Low-Income Tenants," found that the city could save $45.2 million a year if it spent $3.5 million on lawyers for the indigent in housing disputes.

"Investing in legal counsel for low-income tenants facing eviction is one of the most effective measures to prevent evictions and homelessness, which in turn will result in significant cost savings and benefits for our community," PBA Chancellor Mary F. Platt said in a statement accompanying the report.

According to Stout's estimates, legal representation for indigent tenants creates major savings to the city by reducing the costs associated with homelessness: More than $26.38 million could be avoided in shelter costs, as well as $8.71 million in emergency room and inpatient hospital room expenses. It can also reduce the cost of providing public benefits when jobs are lost due to eviction and the cost of family and community instability.

There may be no better city than Philadelphia to join the movement. U.S. Census Bureau data shows that it has a poverty rate of nearly 26 percent, the highest among the top 10 largest American cities. 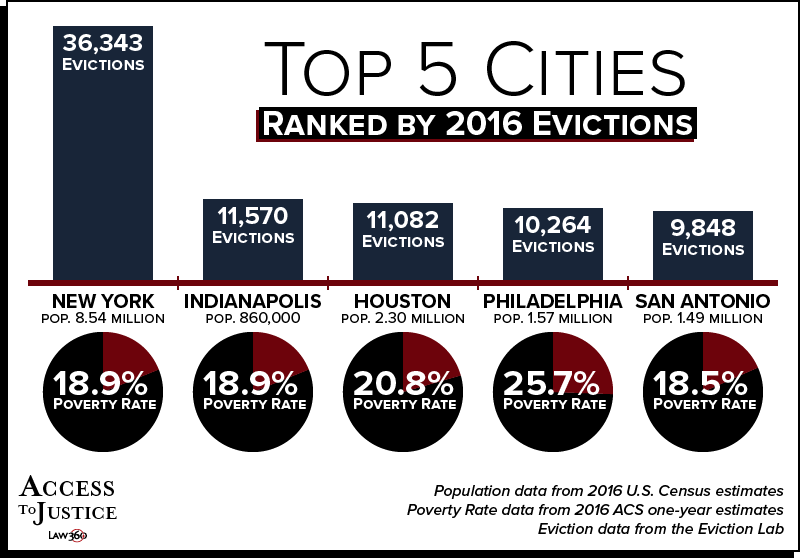 And data from Princeton University's Eviction Lab reveals that approximately 1 in 14 Philadelphia renters had an eviction complaint filed against them between 2010 and 2015. Landlords are represented in four out of five of those cases, often going up against pro se litigants with little knowledge of their rights.

Morrison was almost one of them, until she obtained legal assistance from Community Legal Services, a nonprofit that helps people like her with housing and other problems.

"They gave me the comfortability and the strength to face my fear," Morrison said. "I was glad that I was told what I can do and what I can't do and what my responsibilities were as a tenant."

With the help of an attorney, she was able to show the court that her landlord was noncompliant with several landlord-tenant laws. Morrison ended up saving five months' worth of back rent, and has since moved on to a new apartment — one that doesn't have leaky ceilings.

According to Ethan Fogel, a Dechert LLP partner who serves on PBA's Civil Gideon Task Force and helped commission the Stout report, helping tenants like Morrison avoid having to pay a money judgment is just one way in which lawyers make a difference. Another key benefit to legal representation, he said, is that it can help tenants get more time before they have to move out.

"If we can get a client 50 or 60 days to move out, as opposed to the 21 days or so they would otherwise get, then we think we make a big difference in terms of the disruption that they face, their need to access shelters, and the disruption that creates from the city's standpoint," Fogel said.

Neil Steinkamp, managing director at Stout, said his firm is in discussions with roughly five other major metropolitan areas that are interested in analyzing whether they should join the eviction right-to-counsel movement. He said the momentum has been sparked by a lot of factors, including an increased body of research.

"We have a greater sense of awareness of the numbers of people and families that are going through eviction, and the extent to which they impact some of the more marginalized populations the most," he said.

"You know, wealthy people are not being evicted very frequently," Steinkamp added. "The people who are facing these challenges most frequently are those who have the least resources and the least ability to defend themselves and identify the resources they need in order to seek stability."

In order to bring the city's spending up to the $3.5 million suggested in the Stout report, however, Gladstein said both the city council and Mayor Jim Kenney would have to sign off on it.

She added that the Mayor's Task Force on Eviction Prevention and Response issued recommendations earlier this year, including one which advised the city to increase legal representation for low-income tenants.

"There's been growing understanding of the instability that eviction causes and the need to address in a variety of ways," Gladstein said. "We agree there's a need to address this."