Who Are You Without An ID?

When Mahmoud Hussein's wallet was stolen by a pickpocket, he knew he needed to get a new ID card immediately.

In Kenya, a person needs an ID card to vote, enroll in school, get a job, obtain a driver's license, file a police report and, in some cases, to enter a law office or courtroom.

But faced with hurdles including multiple vetting processes by committees of elders and security personnel who demanded to see more paperwork than he could provide, he didn't get a new one for 29 years.

Meanwhile, he had to rely on his wife's income and struggled to make ends meet, according to a spokesperson for Namati, a nonprofit organization that helped Hussein obtain an ID. 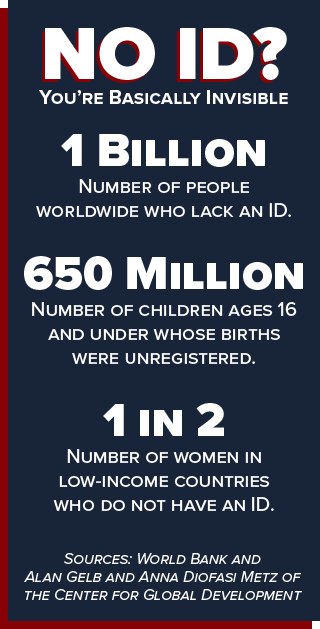 Hussein was among the 1 billion people across the globe who face challenges in proving who they are because they lack official proof of their identity.

As a result, they struggle to access basic services including health care and education, as well as obtaining a cellphone, using a bank card or finding a job, according to the World Bank, which gathered the data as part of its Identification for Development initiative, or ID4D.

Citizens may also not be able to access justice through their country's civil and criminal justice systems when they lack an ID, and while IDs may be taken for granted in developed countries, they are connected to nearly every facet of life.

"Without an ID, in many countries, you're invisible," said Laura Goodwin, director of Namati's citizenship program in Kenya, which trains locals in developing countries to be legal advocates. "You don't exist in the eyes of the state."

Goodwin is based in Kenya, where around 9 percent of the population over age 15 lacks a national ID, or about 2.7 million people. In Nairobi, Namati trains local Kenyans to become paralegals and help other Kenyans to get IDs, including Mahmoud.

"The vulnerability of not having an ID opens people up to exploitation and corruption," Goodwin said.

Within a city or between cities there are often police checkpoints where a traveler needs to have an ID. To fill out a police report, or enter a government building, you may need an ID, including to go to court. Sometimes, without an ID, people are asked to pay a bribe to the police, Goodwin said.

Even with the number of Kenyans who lack IDs, the country still fares better than many others. 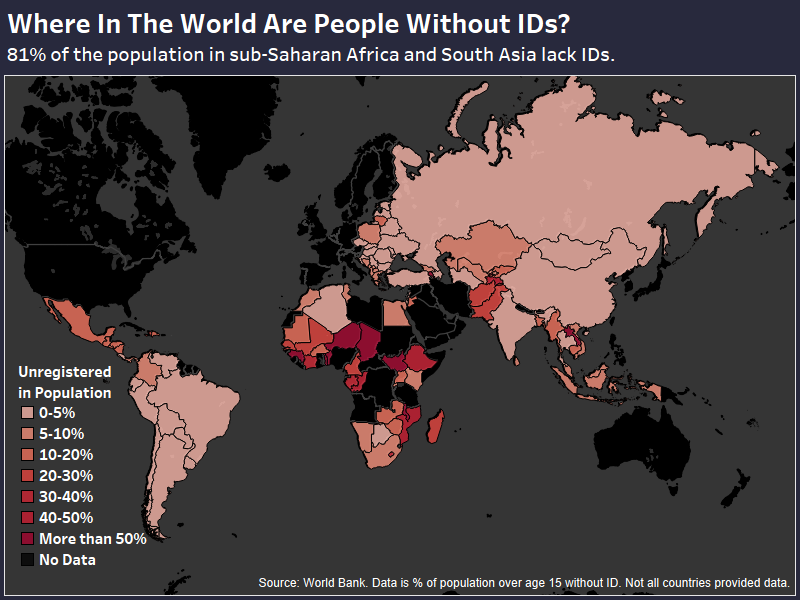 
Of the 1 billion people without IDs, 81 percent live in sub-Saharan Africa or South Asia. South Sudan, Chad and Armenia are among the countries with the highest share of unregistered population, according to World Bank data on people over age 15. Those countries also have a high rate of the population without a birth registration. For example, UNICEF data shows that only 35 percent of the population in South Sudan has a birth registration, and only 12 percent in Chad.

"Without a secure and trusted way to prove their identity, people struggle to open a bank account, enroll in school, access health and social services, or obtain a mobile phone," said Vyjayanti Desai, program manager for the ID4D Initiative. 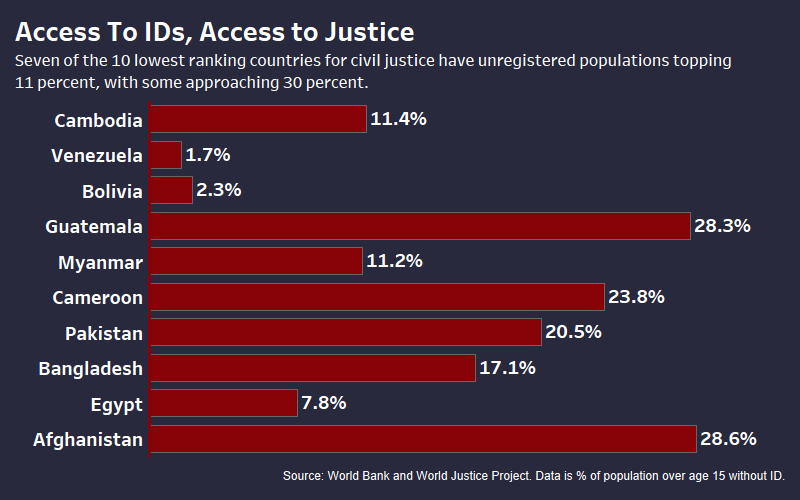 The obstacles people face in getting an ID may be the result of discrimination, illiteracy, large distances to ID registration points, cost, time, and not knowing their right to an ID.

Many countries with large populations of residents without IDs also have high measures of corruption, discrimination or improper government influence in their civil justice systems, according to data from the World Justice Project Rule of Law Index. The index ranks countries based on the quality of their justice systems, and is separate from World Bank data but shows some overlap. In many of the worst-ranked countries for civil justice, nearly 20 percent of the population over the age of 15 does not have an ID.

"Access to justice is being able to obtain a just resolution and enforce your rights," said Sarah Long, director of the Rule of Law Index. "Having legal ID helps people assert their rights when they run into issues accessing basic public services and benefits they're entitled to."

Once a person has one legal problem, that can snowball into more legal issues, according to Long, who calls that "problem clustering."

"Problems with legal identity or citizenship can bring about other legal problems, such as trouble accessing health care, education or other public services," Long said. 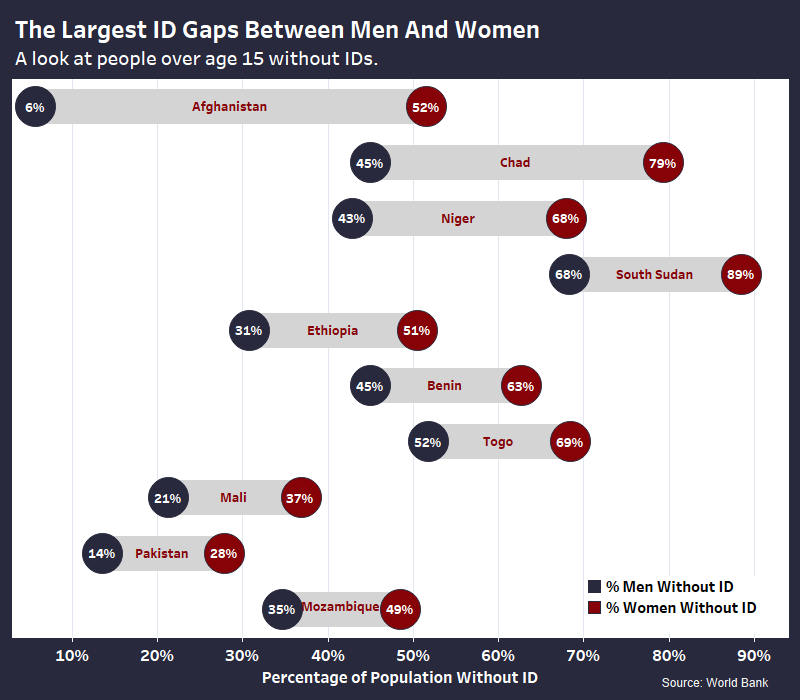 The ID problem appears to be worse among women.

According to the 2017 ID4D-Findex survey, in low-income countries more than 45 percent of women lack an ID, compared to 30 percent of men, a situation that disproportionately limits how women can participate in economic and political life in their country.

A variety of social barriers can play into those gaps.

Child marriage is more common among women in countries with relatively few women with IDs, and in those countries women are less likely to participate in the labor force, according to the World Bank.

In Afghanistan, Benin, and Pakistan — all countries with ID gender gaps of more than 15 percentage points — a married woman can't even apply for a national ID in the same way as a married man, according to the World Bank in its Women, Business and Law report. 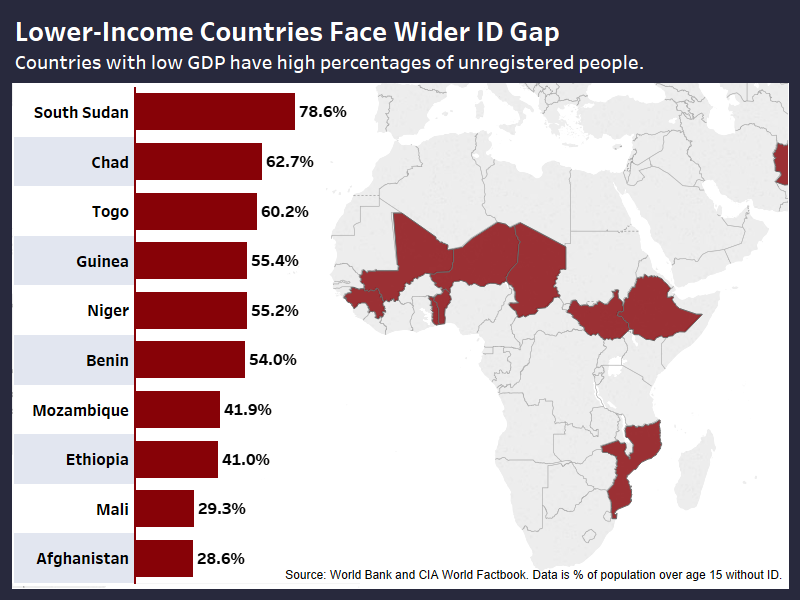 There is also a connection between a country's income and IDs.

Those numbers reinforce the fact "that lack of identification is a critical concern for the global poor," Desai wrote on a World Bank blog.

Momentum could be building to tackle the ID problem, though the path forward remains hazy.

The United Nations has made the issue one of its "sustainable development goals" and set a target that by 2030 there will be legal identity for all, including birth registration. However, it hasn't specified how it plans to reach that target.

But some progress is being made. A U.N. report from 2018 shows that more children in sub-Saharan Africa under age 5 now have birth registration than in 2016. Some countries, such as Malawi, have made huge strides. Between 2017, when the World Bank collected data, and 2018, Malawi's population went from 87 percent of people without ID to about 90 percent with an ID.

Multiplying such gains will take a holistic approach, according to experts.

Goodwin, who works with populations in Bangladesh and Kenya who face exclusion and discrimination, points out that even when more people in a country gain IDs, it's important to address the underlying barriers.

She said it's important to ask, "Who is getting left out?"

Data from the ID4D Findex Survey was collected as part of the 2017 Gallup World Poll and includes data from 99 economies. Survey respondents were over age 15 and asked whether they personally had a specific national ID. Birth certificates, voter IDs, etc. were not included. The percentages of a population without an ID are estimates, as there is no standard, agreed-upon approach to measure the number of people without legal identity.