Like most other states that allow people to clear their criminal records, Michigan imposes strict eligibility restrictions and requires former offenders to navigate a complex legal process. But newly published research out of the Wolverine state provides fuel for an ongoing national movement to make the process more accessible by automating expungements.

The research by two University of Michigan law professors reveals that just 6.5 percent of people eligible to clear their criminal records actually do so via Michigan's expungement laws.

Released on March 16, the findings by Sonja Starr and J.J. Prescott give a major boost to the bipartisan, nationwide push for automatic record-clearing legislation referred to as "Clean Slate" laws, currently being considered in Utah, Connecticut, California, Michigan and others.

John Cooper, executive director of advocacy group Safe and Just Michigan, told Law360 that his organization has been collaborating with police, prosecutors, court administrators and lawmakers to draft a state Clean Slate bill expected to be introduced within the next two months. He said the final product is still unfinished, but noted both automation and expanded eligibility are likely to be included.

"The Starr and Prescott study provides the kind of empirical justifications for those reforms that we haven't really had in the past," Cooper said. "It shows we've got an opt-in problem. If we make this automatic, way more people are going to benefit than if it's something where we put the burden on them to navigate." 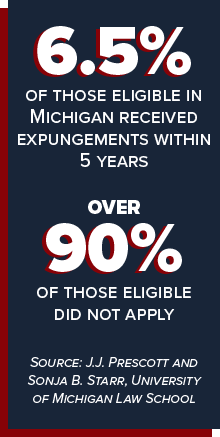 The Center for American Progress helped get the nation's first clean slate law passed in Pennsylvania last year. Rebecca Vallas, CAP's director of poverty, told Law360 that the Michigan study "puts staggering numbers" to what legal aid attorneys have been saying for years.

"Only a small fraction of people who are eligible to get their records cleared ever get the relief that they deserve," she said. "It doesn't make sense to require people to navigate a Kafka-esque system that they're only going to have luck successfully navigating if they're able to afford a lawyer."

"Expungement of Criminal Convictions: An Empirical Study" begins with a note on how the collateral consequences of a criminal record can prevent access to housing, education, employment and more.

To help alleviate those barriers, Michigan has had a "set-aside law" on the books since the 1960s. It imposes a five-year waiting period and includes restrictions that, during the time period analyzed in the study, limited set-asides to those with exactly one conviction on a single charge. Those with multiple charges, even if they stemmed from the same incident, were excluded.

For those eligible, the study details how expungement requires "administrative burdens" — taking time away from work and childcare, going to a police station to get fingerprinted, making several trips to courthouses, finding and paying a notary, mailing all the materials and monitoring the responses — that "may be simply impossible, or at least difficult enough to be strongly discouraging." 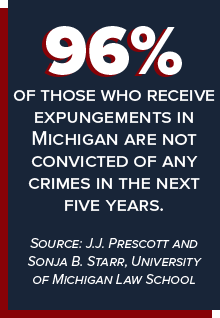 The fact that just 6.5 percent of eligible offenders receive set-asides within five years of becoming eligible, according to Starr and Prescott, is a reflection of both the difficulty of the process and the stringency of its eligibility requirements.

"On balance, the population of people living with criminal records is continuing to grow quickly," they wrote. "The set-aside law is like a bucket removing water from an ever-rising ocean."

Though Starr and Prescott called the uptake estimate "discouragingly low," the researchers found the few who took advantage of the state's set-aside law earned, on average, 25 percent more in wages than they did before their expungement.

"In fact, set-aside recipients appear to be lower-risk than the general public," the paper states. "There is still no evidence to suggest that access to expungement would increase the recidivism risk … if anything, due to the benefits we find in employment (and possible benefits in other areas), one should probably expect their crime rates to decline."

In the study's conclusion, Prescott and Starr listed suggestions for simplifying expungement so more people could access the demonstrated benefits, including automation, elimination of fees and increased online services. Prescott told Law360 that it's not like a lot of people turn in applications and see them denied. 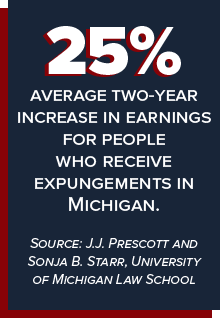 "They just don't complete the process," he said.

Now armed with evidence that proves how petition-based expungement leads to low uptake rates, advocates are gaining momentum in states across the country.

Utah Gov. Gary Herbert is currently considering a Clean Slate bill that passed the state senate unanimously on March 13. Via automation, it would tackle a backlog of applications that can force people to wait up to six months just to see if they're eligible for expungement, though it doesn't expand eligibility criteria.

Meanwhile, San Francisco District Attorney George Gascón has backed a California house bill that would automate expungement for records of nonconviction arrests as well as for some misdemeanors and certain nonviolent felonies.

In Connecticut, a coalition of religious groups and civic organizations called CONECT is lobbying for a law to automate expungement after three years for misdemeanors or five years for nonviolent felonies. That state currently requires people to petition the Board of Pardons and Paroles.

According to Vallas, even the federal government is looking to hop on board the automation train. She said 2018 Clean Slate legislation by Rep. Lisa Blunt-Rochester, D-Del., is expected to be reintroduced by a bipartisan group of lawmakers in the coming weeks.

"The bipartisanship we're continuing to see around this set of issues is what's making change possible when it seems the two parties can't agree on almost anything else," she added.