For the first time ever, a collection of world leaders and justice advocates have quantified the challenge facing the United Nations' stated goal of ensuring equal access to justice for all by the year 2030.

Those figures, plus suggestions for closing the global justice gap, were released in a report last week by the Task Force on Justice, an initiative by the international partnership known as the Pathfinders for Peaceful, Just and Inclusive Societies. The partnership aims to accelerate progress toward the UN's 2030 Sustainable Development Goals. 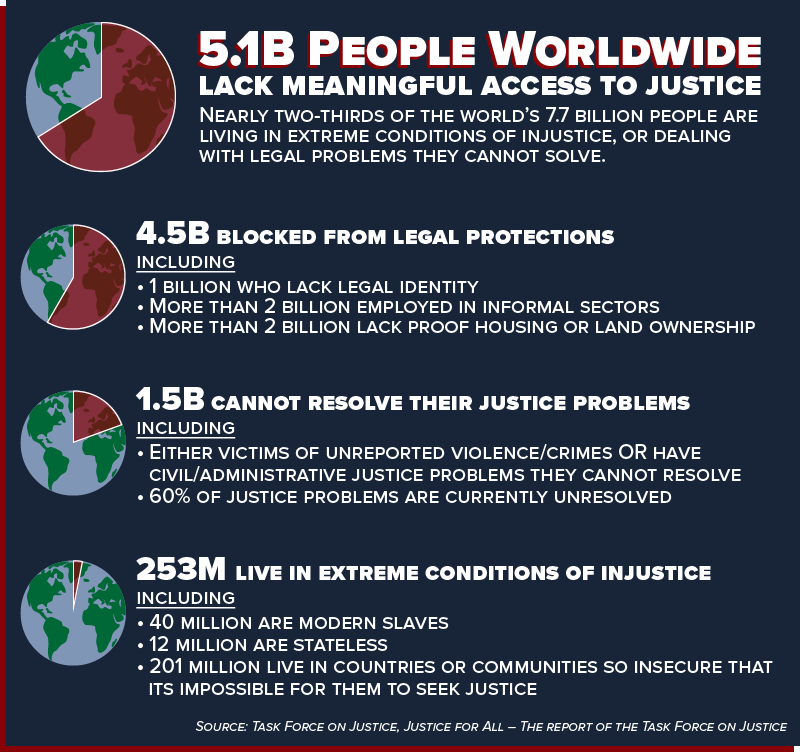 Task Force co-chair Priscilla Schwartz, Sierra Leone's attorney general and minister of justice, addressed the report at the World Justice Forum in The Hague, Netherlands, on April 29, highlighting how justice systems too often deliver "justice only for the few, usually the wealthy and the powerful."

"As we saw in Sierra Leone, this unfairness can lead to tremendous resentment among the people, and this resentment can eventually explode into terrible violence," she said, recalling her country's 11-year civil war. "To prevent this happening, we need to create justice systems that deliver justice for all. And this requires radical action."

The 127-page Justice for All report lays out a plan for such action, one that focuses on "reaching the furthest behind first" and using people-centered data and evidence to steer reform.

The findings are drawn from an audit of over 600 potential data sources that included research and surveys by the world's leading justice organizations, including the World Justice Project, the Open Society Justice Initiative, the U.N. Development Programme and the Hague Institute for Innovation of Law. 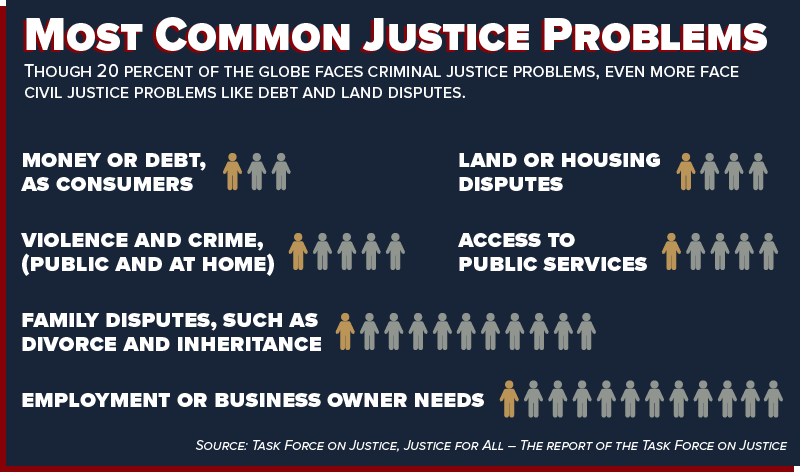 Maaike de Langen, the task force's head of research, told Law360 that the report demonstrates how often justice problems emerge from the civil systems, as opposed to criminal ones.

"If you talk about investing in access to justice for all, you need to focus on what people problems really are," she said. "Criminal justice is definitely a part of that, but it's not the whole story."

In addition to quantifying the global justice gap and the prevalence of its problems, the report puts a number on the cost of unequal access to justice. It found that countries can lose up to 3% of their gross domestic product, or GDP, to ensuing conflicts, deterred investment or, most commonly, people who miss or lose work.

The task force also tapped the Overseas Development Institute think tank to come up with the first-ever estimate of the finance needed to provide basic levels of access to justice. 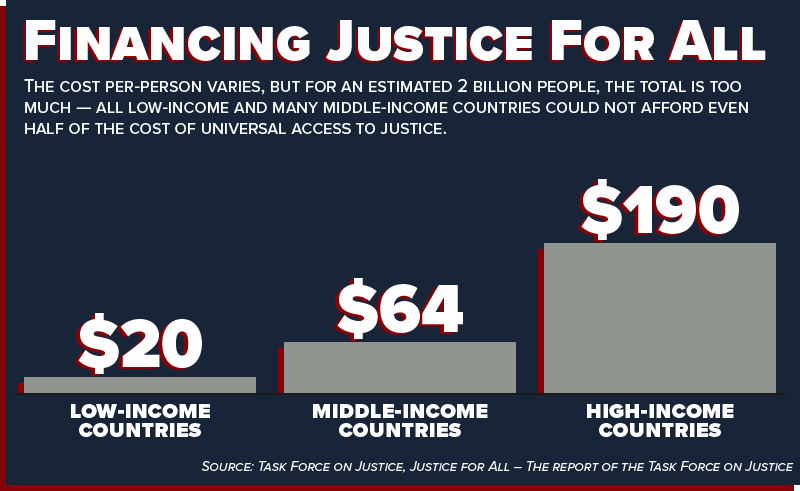 To overcome the challenge of affordability, the report recommends directing existing resources toward lower-cost approaches "with potential to deliver justice at scale," as well as diversifying funding sources.

The latter recommendation comes after four years when donor investment in justice declined by 40 percent, according to the report. De Langen said that part of the problem is the sense "that justice is a difficult area to work in — it's hard to get results."

"There's been some soul-searching in this sector, in terms of how to prove that you're having an effect," she said. "A large part of this report is focused on what works."

In an appendix listing successful programs in more than 30 countries, the report highlights how a swift justice program in the Bahamas increased criminal case resolution by 39 percent, and how mediation in Liberia's "peace huts" has led to the removal of corrupt politicians. It also notes U.S. initiatives, like legal aid for poor tenants, interagency collaborations for legal aid and bail based on reoffending risk.

On Wednesday, the task force will present Justice for All again in Buenos Aires, Argentina, part of what de Langen said would be a yearlong effort to disseminate its findings and stir action with justice partners.

"We want to create support for the implementation of some of the recommendations," she said. "In the health and education sectors, I think there's more international exchange happening — we'd like to see that happen in the justice sector. We feel countries can learn from each other."

Update: This article has been updated with additional groups that contributed to the report.