After serving 23 years of a life sentence for the nonviolent crime of joyriding, Kenneth Oliver was released last month with the pro bono help of attorneys from Mayer Brown LLP — though thousands of others like him who are eligible for release in California remain behind bars.

Oliver's sentence of 52 years to life in prison over his 1997 conviction was applied under California’s three strikes law, which condemned many nonviolent offenders in the state to harsh sentences if convicted of a third lifetime felony. 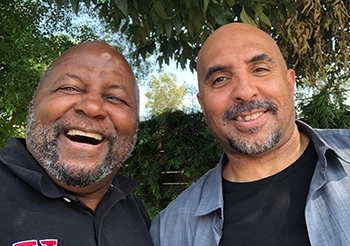 Ken Oliver, right, is pictured with his father, Bernard Oliver, a dean and professor at Valdosta State University in Georgia, the day after he was released from prison. (Bernard Oliver)

But Mayer Brown and Stanford Law School’s Three Strikes Project secured his release under Proposition 36, a 2012 ballot initiative that repealed portions of the state’s three strikes law and allowed nonviolent offenders to apply for early release.

According to Three Strikes Project director Michael Romano there are around 4,000 other three strikers still in prison who may currently be eligible for release, but due to a need for more pro bono representation, along with a lengthy parole process, they have not yet had the chance to prove they are no longer a danger to society.

Recidivism rates for those released under Proposition 36 are around five times lower than California’s state average, and many are sentenced to life for relatively minor crimes, Romano said.

Oliver, an avid reader, studied legal books in prison and says he plans to find work as a paralegal now that he has been released. When he entered prison in 1997, he was 29 years old. He is now 52.

His guilty plea to two counts of joyriding stemmed from the theft of two vehicles from car dealerships in Los Angeles County, which were later found at a hotel.

Mayer Brown litigation partner Ward Johnson first learned about the Three Strikes Project in 2016. He was watching a documentary about the state’s three strikes law and it left such a strong impression that he later showed it to his wife.

Her response was, “Why don’t you work with them?” So Johnson reached out to Romano, and learned that there was indeed a way for him and his law firm to lend their civil litigation expertise to make a major difference in one man’s case.

Oliver had filed a federal civil lawsuit against the state department of corrections and needed lawyers to represent him. After corrections officers found a copy of George Jackson’s classic book, Blood in My Eye, in his jail cell, the inmate had been labeled a “gang associate,” and, as a result, was placed in solitary confinement for eight years. The designation also meant that Oliver was not eligible for release under Proposition 36.

For more than a year, Johnson and his team spent numerous hours traveling to the prison to visit Oliver, planning and litigating the case. And, in 2018, the attorneys were able to reach a settlement on behalf of Oliver in which the California Department of Corrections agreed to void and expunge his gang validation and pay him $125,000 in damages.

After that, the team from Mayer Brown, along with attorneys from the Three Strikes Project, was able to successfully advocate for Oliver’s release from prison, and he walked out on June 3.

“Rarely has a major law firm committed to working on one of these cases the way that Ward and his team have,” Romano told Law360. “They put an extraordinary amount of time, resources and talent into this case.”

Reflecting on the case, Johnson said the moment that Oliver was finally released stands out to him as especially gratifying.

“I think it made a difference in somebody’s life. It’s not every day you get the chance to do that,” he said.