For NYC Defenders, Pay Promise Is Vague But Encouraging 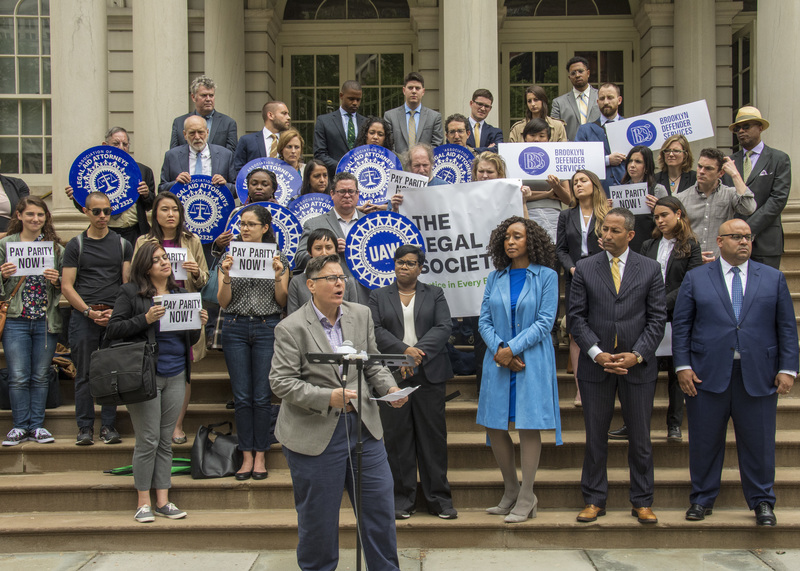 
New York City public defenders don't get paid as much as their counterparts in the city's Law Department, a disparity that leads them more likely to leave public service or have to moonlight as Uber drivers to make ends meet.

But after a monthslong campaign for pay parity from The Legal Aid Society and other defender groups that contract with the city, Mayor Bill de Blasio announced earlier this month that public defenders will have their pay raised to match the salaries of attorneys on the city payroll within the next four years.

"There are real retention issues and recruitment issues that we care about a lot for those folks," the mayor and presidential candidate said in a June 14 press conference. "That piece is going to get immediate attention. And then we're going to keep working throughout the coming months till we get it done."

The announcement drew praise from The Legal Aid Society's CEO Janet Sabel, who noted that the city's $92.8 billion budget agreement is ultimately "a reflection of values." The fact that it includes a promise to establish pay parity signals a political shift.

"With this funding allocation, the city reaffirms its commitment to supporting our staff and the communities that we serve," Sabel said.

But de Blasio acknowledged at the June 14 press conference that the promise lacked "hard numbers."

"Anything that has to do with labor contracts we do not negotiate in public," de Blasio said on June 14. "We do not put down a dollar figure ... this is all part of a discussion."

So for public defenders around the city, the news that brought "a feeling of relief" also has some concerned about the details, according to Jared Trujillo, president of the Association of Legal Aid Attorneys - UAW Local 2325.

A City Council spokesperson could not confirm if the budget agreement included a $15 million boost for public defender salaries that a preliminary budget had recommended. The spokesperson did say that, by March 2020, the administration will build a four-year, full implementation plan to reach pay parity with the Law Department.

"The city has committed to having a four-year plan established by March of next year," Trujillo said. "I hope they stick to that, because it's a huge difference as far as people being able to plan."

A former Legal Aid Society attorney himself, Trujillo added, "We know we're not going to get rich. But the goal is that our wages would be sustainable so that people can stay."

Currently, retention rates are dismal: The Legal Aid Society has reported that nearly 48% of 2007's hiring class left public defense for other jobs within 10 years. A driving force are notoriously low salaries, not just compared to BigLaw but even to other public service attorneys. Trujillo has estimated up to a third of Legal Aid lawyers in New York work additional jobs.

According to testimony at an October City Council meeting, the corporation counsel attorneys in the Law Department who represent the city, mayor and other elected officials start off earning at least $68,000, the ceiling for a beginner public defender.

At the five-year mark, the most a public defender can make is $78,000, while the floor for law department attorneys with the same experience is $79,000. Those public defenders that do make it to 10 years of service earn about $90,000, said Legal Aid's top criminal defender Tina Luongo, a number 17% less than the $108,000 average for corporation counsel with similar experience and a fraction of the potential earnings in private practice.

It's not just New York where public defender salaries are driving attorneys to seek other work. According to Rosalie Joy, vice president for defender legal services at the National Legal Aid & Defender Association: "Pay parity is an issue going on in every public defender's office that I know of."

Her organization supports legislation introduced by presidential candidate U.S. Sen. Kamala Harris, D-Calif., that that would create a $250 million grant program to fund public defense across the country. While that bill focuses on pay parity between defenders and prosecutors instead of city attorneys, Joy said the federal effort shares the same goals as New York's push.

"The public defense community around the nation is celebrating this development in NYC," she said. "Each time that happens, it adds another level of advocacy for offices to say, 'Look, they're doing it, and here's reasons why you should support this.'"

The public defenders' campaign included a rally at City Hall, video testimonials and media coverage of lawyers forced to take on second and third jobs to make a living wage and chip away at their student debts.

Trujillo noted that many public defenders are attorneys of color who take on a bigger burden of law school loans in order to serve their own communities, which tend to be hardest hit by mass incarceration.

"The salary is a tremendous deterrent to being able to really participate in middle-class life," he said. "So bringing us to parity is a tremendous step forward, and it gives people a lot of hope knowing they can enter this job and support themselves, or have kids, or just not live with three roommates in New York forever."