Why A Ruling On Poland's Judges Matters Across The EU

A recent decision that Poland's lowering of the retirement age for its sitting high court judges violated European Union law and judicial independence marked a significant moment not only for Poland but also the rule of law, setting a clear boundary for the bloc's other 27 member states, experts said.

Part of a controversial law that took effect in July 2018 reduced the mandatory retirement age of judges serving on the Supreme Court of Poland from 70 to 65, putting 27 sitting judges — about one-third of the high court's judiciary at the time — at risk of being sent into retirement, including the court's head judge.

The EU's top court didn't mince words in ruling on the country's action.

"Poland has infringed EU law," the European Court of Justice said in an announcement about its June 24 decision, adding that lowering the retirement age "is not justified by a legitimate objective and undermines the principle of the irremovability of judges, that principle being essential to their independence." 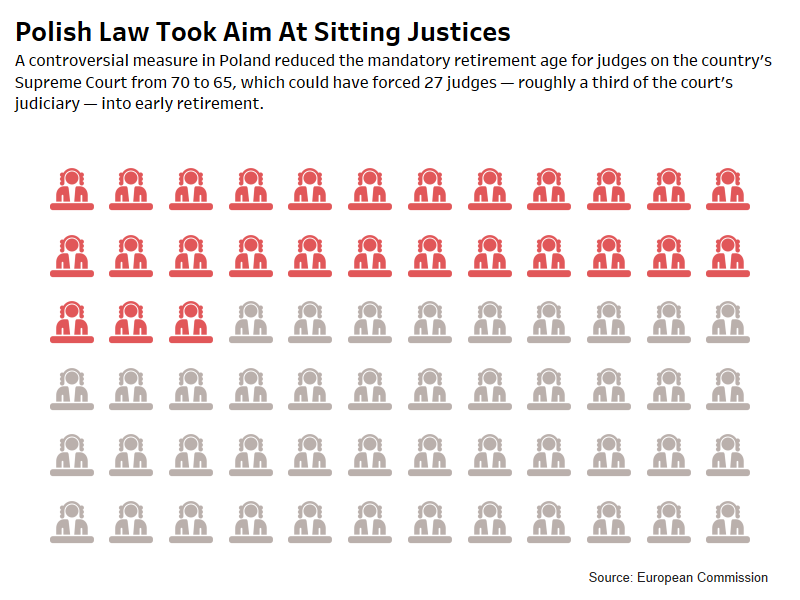 The measure was part of broader judiciary changes the central European country enacted over the past four years, which observers criticized as a way for the governing party to expand its power over the courts. In the face of such criticism, Poland had reversed the law and reinstated the judges months before the ECJ's decision.

Still, the court decided to move forward with a judgment in the case.

Generally, the ECJ moves cautiously and slowly to make incremental changes, but the most recent decision "is fireworks," said Kim Lane Scheppele, a sociology and international affairs professor at Princeton University.

"I think it's fair to say that no expert in ECJ law would have guessed two years ago that we'd be in the place we are today, with the ECJ enforcing the general principles of the EU treaties through the ECJ's strict insistence that all states have an obligation to ensure the independence of the judiciary," she said, adding that the most recent decision is "a big-bang explosion of new law in this area."

Although the decision only applies to part of Poland's attempts to overhaul its courts, legal experts say it's significant because it will likely apply to subsequent cases in that country and beyond.

"It's a precedent because it's the first case in which the European Commission alleges that changes in the organization of the judiciary in a member state can violate EU law," said Michal Krajewski, a doctoral researcher at the European University Institute who formerly was a legal officer at the Polish Constitutional Tribunal.

Among the important outcomes of the decision, the court said EU member states must obey the rule of law, and that doing so requires having an independent judiciary without external or internal pressures. The court also clarified that the irremovability of judges is part of EU law and is an essential element of judicial independence.

"[The decision] sends a warning to the government of Poland not to try similar tactics in the future. But it also sends an important signal to other member states because rule-of-law backsliding is not a problem that is reduced to Poland," said Barbora Cernusakova, a Poland researcher at Amnesty International.

Since taking over in 2015, Poland's nationalist Law and Justice government, or PiS, has enacted a series of sweeping judicial changes, with legislative and policy measures that not only include forcing judges to retire, but also taking control of the courts that review whether laws are constitutional and giving the Ministry of Justice the discretionary power of appointing, dismissing and disciplining heads of the courts.

While the Polish government said it wanted to align the judicial retirement age with that of the rest of the general population and remove judges appointed during the communist era, critics viewed the mandatory retirement change as a way for the country to replace sitting judges with others who would act in favor of the governing party.

In a report released last month, Amnesty International said "the cumulative effect of the 'reforms' has been a near wholesale takeover of the judiciary at various levels, severely weakening the separation of powers in Poland."

The law "was just a trick to get rid of one-third of the Supreme Court judges and pack the court with their own candidates," Krajewski said.

When the legislation took effect last year, some justices retired while others continued showing up at the courts in protest. Affected judges could request an extension, but it wasn't clear how each case would be decided, according to the EC.

Supreme Court First President Małgorzata Gersdorf, whose six-year term was due to end in 2020, was among those affected and refused to step down. Many observers deemed her forced retirement unconstitutional, according to Amnesty International.

The EC accused Poland, which joined the EU in 2004, of undermining the judicial independence of its judges, and in September referred the country to the ECJ. It also requested the court declare interim measures to halt the law and roll back the changes made to Poland's high court.

"The implementation of the contested retirement regime for Supreme Court judges in Poland is being accelerated and is creating a risk of serious and irreparable damage to judicial independence in Poland, and therefore of the EU legal order," the EC said at the time.

In the fall, the Luxembourg-based ECJ issued interim measures to prevent Poland from forcing judges to retire. Backing down under widespread criticism, Poland soon reversed the law.

Polish Justice Minister Zbigniew Ziobro last year said the country, as part of the EU, respects the bloc's rules and regulations, according to a translation of a speech he gave to the country's Parliament.

Despite the government's reversal, the ECJ continued with deciding the case because it involved judicial independence in the EU legal order, the court said, and a few months later it released its ruling.

A representative from the Ministry of Justice did not immediately respond to request for comment about the outcome.

In 2012, Europe's top court decided a similar case out of Hungary that involved the country's measure that cut the retirement age of the judiciary from 70 to 62 years. But the court only went so far as to say it was unjustified age discrimination.

The ECJ's approach was different with Poland. The court not only said the country violated EU law, but that it also breached the main values and principles of the EU, namely the rule of law and democracy, said Gabor Halmai, a professor of comparative constitutional law at the European University Institute.

"In the Hungarian case, it was a violation of a certain EU directive. In the case of Poland, the ECJ declared that this is a kind of systemic violation of certain principles and values, which is much, much more important to declare," he said.

While Poland had already retracted the law at issue, the decision could be a foundation for future judgments regarding the so-called reforms of the Polish judicial system, including a pending case that involves the country's National Council of the Judiciary.

The body, which nominates judges and reviews ethical complaints against them, is no longer seen by many as independent of political control, and the EU court is reviewing that controversy.

"I very much hope," Halmai said, "that this will be a chain reaction to the other elements of the judiciary reform."