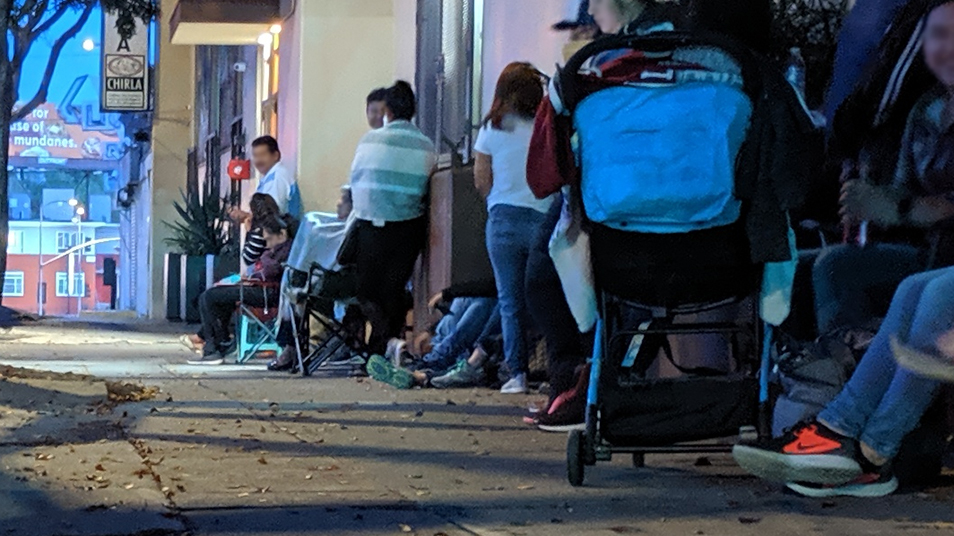 More than a dozen people lined up outside of CHIRLA's offices before dawn on Saturday. The legal aid clinic is only able to guarantee that its immigration attorneys will see the first 20 clients in line, so those seeking help often begin lining up outside the Los Angeles office the previous night. (Brandon Lowrey | Law360)


A gray-haired couple clutched pillows, blankets and file folders for their son's political asylum case outside the Los Angeles offices of the Coalition for Humane Immigrant Rights on Thursday morning. They had arrived at midnight to wait outside the legal aid clinic, heading a line of nearly 100 people who would show up by the time the doors opened at 8 a.m.

The line functions as a barometer for fear.

CHIRLA only guarantees that it can provide legal assistance to the first 20 people who show up, so the length of the line tends to be proportionate to the level of desperation among local immigrants. It has only grown longer, on average, since President Donald Trump was elected, CHIRLA officials say.

"Every time he sends a tweet on the weekend or something, the very next day you can see it in the line," staff attorney Maritza Agundez said. "So like last week, two weeks ago, when he threatened to do raids again, the line was around the corner."

Immigrants in Los Angeles have reason to be concerned. In addition to those threatened raids, the Trump administration recently expanded immigration agents' power of expedited removal, which allows them to quickly deport some immigrants without judicial review.

That power used to be limited to areas within 100 miles of a land border, and targets had to have been in the country for less than 14 days. On July 22, the administration announced that the 100-mile limit would be lifted to cover the entire U.S. and that anyone in the country for less than two years would be subject to expedited removal. Los Angeles is slightly more than 100 miles from the Mexican border.

"We are past the breaking point and must take all appropriate action to enforce the law, along the U.S. borders and within the country's interior," acting Homeland Security Secretary Kevin K. McAleenan said in a statement the following day. "This designation makes it clear that if you have no legal right to be here, we will remove you."

The change has made fighting rapid deportations more difficult; immigrants previously had to show an immigration officer they were in the country for more than two weeks. Now, they must be able to immediately show that they've been in the U.S. for at least two years.

Immigration rights advocates say expedited removal has raised due-process questions and resulted in serious errors even before this sweeping expansion. Some U.S. citizens or residents have been rapidly deported, even as they told immigration officers that they were in the country legally.

The new policy will exponentially increase such erroneous deportations, according to the American Civil Liberties Union and the American Immigration Council, which are among groups planning to sue the Trump administration over the policy.

"It's going to result in a 'show me your papers' kind of state, because people just don't walk around with the type of documentation they would need to prove they've been in the country for two years or more," said Trina Realmuto, the American Immigration Council's directing attorney for litigation.

Advocates aren't even exactly sure what that kind of documentation would look like. Birth certificates? Child support payment records? Certainly not things that most people would normally carry on his or her person, they said.

"It's difficult, if not impossible, to know how someone could prove on the spot with documentation that they've spent two continuous years in the country," said Anand Balakrishnan, a staff attorney with ACLU's Immigrant Rights Project. "A very small percentage of the population is noncitizens [in the country for less than two years]. This has the potential to erroneously affect a very large number of people."

ICE officials declined to speak on the record with Law360 about the policy changes.

On background, an ICE official said the new policy only lifts the 100-mile geographic limitation for people who entered the country illegally by land; the limit never applied to the relative few who arrive by sea. The official did not respond to questions about how the policy will be applied.

Michael Hethmon, senior counsel for the Immigration Reform Law Institute, which advocates tightening restrictions on illegal and legal immigration alike and has long been pushing for a broad expansion of the expedited removal policy, said that expedited removal is necessary to alleviate the burden on backlogged immigration courts.

Hethmon dismissed civil rights organizations' contentions that the rapid deportations might raise due process issues. Expedited removal is a civil process, and though the target for removal might not get a full hearing before a judge, they do get one before an immigration officer, along with the potential for an asylum test, he said.

And if a person can't prove on the spot that they've been in the country for more than two years, then they simply fail to meet the burden that the law places on them, he contended.

"It's their fault," Hethmon said. "The way any noncitizen can protect themselves is pretty straightforward. They can take a picture on their phone when they cross the border with the date on it. But these folks, they simply, as strange as it sounds, they've been negligent in establishing one of the few procedural protections that they do have."

In Los Angeles, reaction to the new policy has been muted. Many immigrants and advocates were more preoccupied with the threats of immigration sweeps when the policy was announced suddenly late last month.

Gabriel Arellano, managing attorney at the Esperanza Immigrant Rights Project in downtown Los Angeles, said that rapid policy changes are sending waves of panic through immigrant communities that have already long been steeped in anxiety under previous administrations.

"Under the Obama administration, things weren't ideal, of course, but at least there was some talk that was given to actually having priorities and not everyone is a priority for being removed," Arellano said. "Due process was at least something that, appearance-wise, they sought to preserve before. Now, there's no effort given to even preserving a semblance of due process. Everyone's a priority to be removed. Everyone is a target."

Expedited removals of Mexican citizens, in particular, can move extremely quickly. Officials often whisk detainees across the southern border within hours, before a local legal-aid organization learns of the detention and can send a lawyer to help, Arellano said.

He has been telling clients who already have cases within the immigration system to carry their hearing documents or even a work permit to avoid a sudden deportation if they're stopped. Those might work, he said.

At CHIRLA, Wendy, an undocumented immigrant from Guatemala, waited for an attorney to call her in for an interview. She said she had paid a smuggler $5,000 to bring her and her young daughter across the U.S. border in January. She hadn't heard of the change to the policy that makes her eligible for rapid removal.

She wrinkled her nose at the mention of Trump.

"I don't like the way he talks about us," Wendy said in Spanish.

Wendy said she fled her country with her young daughter looking for a better life — to work, not to cause trouble — but people like her aren't what Trump talks about. "Solo problemas," she said: Only problems.

Karla Navarrete, managing attorney at CHIRLA, said that this expedited removal change is something more quiet and insidious than some of the other policies. It's an erosion rather than a landslide. People know it's happening, but they're distracted.

She said that Trump's status as a bogeyman among asylum-seekers and undocumented immigrants has had one positive effect: it has spurred many immigrants to be more proactive about seeking to learn their rights and firm up their residency status.

"Since the election, people have come forward to refile their immigration matters," she said. "People are becoming more active [and] becoming their own defenders. Even people who are not directly impacted are becoming better allies."

CHIRLA has developed an on-call system to better respond to detentions.

"It seems like a consequence to his goal to deport people," she said. "We're getting more ready, and he's getting more savvy."