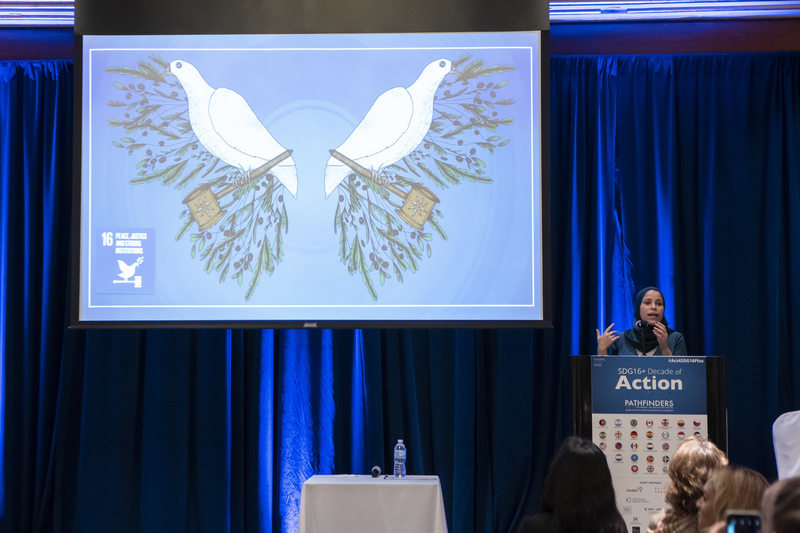 Dr. Alaa Murabit, a U.N.-appointed advocate for access to justice, addresses the challenge of raising the profile of the global justice gap Sept. 24 at a "Decade of Action" event in New York City. (Ayano Hisa | NYU Center on International Cooperation)


In September 2015, the United Nations unanimously set 17 goals to end extreme poverty by 2030. Part of the U.N.'s Agenda for Sustainable Development, the goals included one that called on the world to "provide access to justice for all."

Last week, foreign leaders from across the planet convened in New York to discuss their progress on that goal, known as SDG16. From Liechtenstein to Timor Leste to Liberia, many country representatives noted the challenges they've faced trying to bridge a global justice gap that affects 5.2 billion people.

As Gabriela Ramos, chief of staff for the Organization for Economic Co-operation and Development, remarked during the Sept. 24 "Decade of Action" event, achieving access to justice for all is a complex objective.

"Because it has to do with good governance, governance that is accountable, effective and competent," she said, "it is not an easy task."

Her take is backed by U.N. findings that efforts to promote the rule of law are uneven.

Less than half of all children under 5 in sub-Saharan Africa have had their births registered, presenting problems in accessing justice or social services. In 40 countries, individuals do not have the right to appeal legal decisions to independent bodies. And just 54% of all nations are on track to have human rights institutions that comply with international standards by 2030.

Despite these challenges, however, representatives from several countries reported new initiatives to tackle the global justice gap head on. Dionisio de Costa Babo Soares, Timor-Leste's minister of foreign affairs and cooperation, announced his country's efforts to train judges and public defenders and establish legal clinics for providing advice to those without counsel. 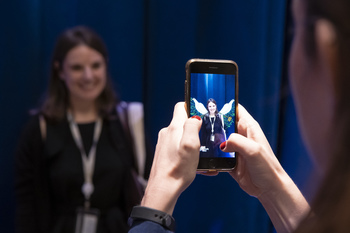 The Pathfinders for Peaceful, Just and Inclusive Societies, an international partnership of world leaders and justice groups, launched a social media campaign and associated app at the event. (Ayano Hisa | NYU Center on International Cooperation)

"No longer will we tolerate family saying, 'It's a family matter, we'll resolve it,'" he said.

In Sierra Leone, efforts are underway to open a national access to justice office within the Ministry of Justice, according to the country's Attorney General and Minister of Justice Priscilla Schwartz.

She also cited a push to register more people's identities in order to enable greater access to legal services and plans to launch a Center for Justice Innovation to examine how technology could bolster legal aid efforts.

"I will come back to show you how far we have moved on this. We have started this march, and we hope that by 2030 we will be the miracle in Africa," Schwartz said.

Representing the private bar was Jeroen Ouwehand, global senior partner at international law firm Clifford Chance LLP. He announced a multiyear partnership with the Hague Institute for Innovation of Law, or HiiL, aimed at increasing the number of HiiL Justice Accelerators, which provide seed money, workshops and mentor support to the world's most promising justice inventions.

"Speaking as a lawyer, frankly, law is a monopolized industry," Ouwehand said. "We want to help HiiL — in dialogue with regulators, national bar associations and other institutions — in its efforts to achieve innovative forms of access to justice."

In addition to updates on progress toward SDG16, the event featured activists who are working to raise the profile of access to justice. Dr. Alaa Murabit, a physician appointed as an official SDG16 Advocate by the U.N. who also founded a Libyan civil society group for women at the age of 21, spoke about the necessity of inspiring global action on the justice gap.

During her remarks, Murabit officially launched a social media campaign sponsored by the international partnership known as the Pathfinders for Peaceful, Just and Inclusive Societies. The campaign features a mobile app that allows people to signal their support for the U.N.'s sustainable development goals.

"It's nearly impossible to get people motivated and excited, and to get any kind of real traction, on goal 16," she said, adding that other goals, such as efforts to mitigate climate change or boost gender equality, tend to get more of the spotlight.

Though she acknowledged part of the problem is political, and also nodded to the challenges of creating accountability in the justice system, she maintained that progress on access to justice is essential to the entire sustainable development agenda.

"Above and beyond, access to justice is the foundation for most of the other goals," she said.