When Hurricane Katrina struck New Orleans in 2005, legal aid provider Southeast Louisiana Legal Services knew that people in its community would need its help with everything from disputes with landlords to appeals of insurance claim decisions.

But there was one big problem: The organization's entire staff had just been displaced by the storm.

In order to deal with the unprecedented legal aid crisis caused by the hurricane, Louisiana adopted a measure that has since been dubbed the Katrina Rule, which modified state rules regulating attorneys to temporarily allow out-of-state attorneys to provide pro bono services to people affected by the disaster, so long as they worked through an established nonprofit.

Since 2005, 19 states and territories have adopted some version of the rule, which has been endorsed by the American Bar Association. In September, a report from the Legal Services Corp. on how legal aid organizations should prepare for disasters recommended that states and courts consider adopting the rule, which has taken the form of ad hoc orders or more formal programs. 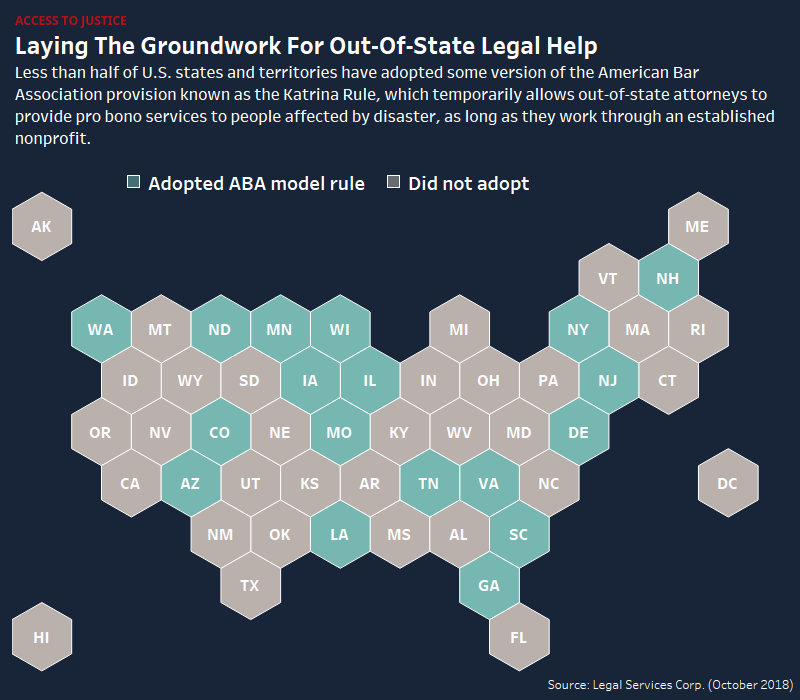 However, not everyone is sold on the rule, or its usefulness. Despite its own history of hurricanes, Florida outright rejected the rule in 2012, with the state's Supreme Court saying it had concerns about how it would be implemented, though it did not elaborate.

"I do think it's helpful," said Jeanne Ortiz-Ortiz, a disaster response legal fellow with Pro Bono Net, but she added that legal aid providers need to think about how the rule should be used in order for out-of-state volunteers to be effective.

In the aftermath of the storm, she said, the entirety of her organization was displaced for at least six weeks. Some staffers were out for up to six months. About a third of the pre-hurricane staff members never returned. Trying to address the needs of the group's clients was therefore a struggle.

"We had the biggest civil legal aid crisis, I would say, that any part of the country has ever faced," she said. "Anything from landlord-tenant situations and illegal evictions and rental spikes and repair disputes in the initial aftermath, and then hundreds of thousands of people needing FEMA assistance and insurance claims."

However, the organization saw an outpouring of support from attorneys and law students from all over the country — so many that SLLS had to hire an internal pro bono coordinator.

Tuggle said most of the out-of-state pro bono attorneys were tasked with helping out with the massive title clearing effort SLLS was undertaking. Many people in New Orleans, she explained, were given the title to their home informally by relatives but never went through the legal process to ensure they were recognized as the owner. Without that, people couldn't file claims, she said.

"We definitely would not have been able to make as much of an impact as fast [without out-of-state attorneys]," she said.

But other states have been more skeptical of the rule, and in several, the issue has simply never been proposed.

In California, representatives of the state bar, which coordinates many legal aid efforts after catastrophic events and provides grants to legal aid providers, said the state generally has plenty of pro bono volunteers after disasters from among the 190,000 attorneys already living there.

"In 2017 with the Sonoma County, Napa County fires, we put out a call for volunteers and immediately had nearly 450 volunteers raise their hand," said Elizabeth Hom, a program supervisor with the state bar. "We've gotten support from large law firms in trying to meet the need."

In the wake of multiple disasters in recent years, the state bar and legal aid providers have been working on getting even better at the way the legal aid community responds to disasters and building up the infrastructure to make it easier to respond quickly, Hom said. But the Katrina Rule hasn't been on the state's radar.

Instead, the state bar has been brainstorming ideas about how to ensure the primarily urban-based attorneys are able to pitch in when disaster strikes in rural areas of the state, or finding ways to do outreach among undocumented people, who are often wary of interacting with courts.

For pro bono attorneys, Hom added, the focus is less on trying to recruit more people and more on keeping the people who do volunteer engaged for the long haul.

"We've had to temper expectations with pro bono attorneys and law students," she said. Often, the need for legal aid doesn't start until a few weeks after a disaster and can then continue on for years. Keeping attorneys interested after the headlines fade is key, she said.

Ortiz-Ortiz said that how useful the Katrina Rule can be depends on the situation and how the rule is utilized. She also noted that pro bono interest can die down before legal aid organizations are even ready to start referring cases, and that not all prospective volunteers will be suitable.

For instance, although Puerto Rico has never implemented the Katrina Rule, the American Bar Association did set up an attorney hotline after Hurricane Maria in 2017 to help people on the island get legal advice. Ortiz-Ortiz, who is licensed to practice law in Puerto Rico, said there was tremendous interest, but not all volunteers spoke Spanish.

Volunteers also had to understand the Puerto Rican legal system, which is based partly on Spanish, not English, law, she said.

"I don't think we should ever turn down volunteers," she said. "But it becomes an obstacle when you have an interest from … mainland attorneys who want to help and connect with organizations on the island but then become more of a burden on the organization."

Ortiz-Ortiz said that, like many things about disaster relief, the Katrina Rule should be something states and legal aid providers think about ahead of time, deciding what out-of-state attorneys might be able to help with and putting a system in place for connecting with volunteers.

As natural disasters grow more common, states and legal aid providers are thinking more about how to provide aid, with the Katrina Rule one of many possible strategies.

Remembering Katrina, Tuggle said, "A huge crisis like that requires a huge solution, and I think the Katrina Rule can definitely be part of that."

--Correction: A previous version of this story misstated Jeanne Ortiz-Ortiz's name. This error has been corrected.