Bart Stichman On Making Sure Veterans Get Their Due

Bart Stichman has spent more than 40 years fighting to help veterans get their benefits and could rightfully be cast as one of the founding fathers of the Court of Appeals for Veterans Claims. 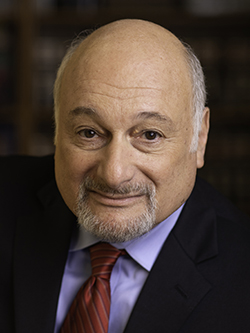 Bart Stichman helped convince the U.S. government to create a court for veterans' appeals 30 years ago. It is now the battlefield where he and other advocates fight to ensure veterans get the benefits they're due.

That court didn't exist back in 1974, when Stichman, a Long Island native, graduated from the New York University School of Law. It wasn't until he co-founded the National Veterans Legal Services Program in 1981 and then spent nearly a decade lobbying lawmakers that Congress created the CAVC as a court where veterans could appeal denied government benefits.

"Me and others," Stichman said, regarding the lobbying effort. "I wasn't solely responsible for it."

Despite his humility, the CAVC asked Stichman to speak during its Nov. 14 event celebrating its 30th anniversary. The selection is no surprise, considering the hand Stichman has played in several crucial veterans rights' cases over the course of his career.

Most recently, he's helped veterans win the right to seek class action status at the CAVC, in a case that could see the Department of Veterans Affairs pay over $6 billion in improperly denied reimbursements for medical care at non-VA emergency rooms. The potential total would beat his previous high-water mark of $4.6 billion, paid out in retroactive benefits to Vietnam War veterans exposed to Agent Orange after litigation by the NVLSP.

Law360 caught up with Stichman to discuss the reason he got into veterans legal services and the role he's played in assuring access to justice for veterans.

Why did you get involved in veterans' legal services?

It was partly serendipity, because I was looking at other public interest jobs. But my father and my uncles served in World War II. And a bigger incentive was the Vietnam War and how the service members were treated when they got back home, even spat upon.

Through the luck of the draw, I didn't get drafted. That's one of the pulls on my heart to help these people — they went in my stead and served our country under the draft. And a lot of them came back much worse than when they went in. They should be treated with the utmost respect. They should be first class citizens, but that's not the way they were treated.

And still, even those who served in more recent wars aren't treated the way they should be, especially as far as disability benefits are concerned.

This year is the 30th anniversary of the CAVC. What role did you play in its formation?

For decades, veterans could not appeal to any federal court to challenge a VA denial of benefits. They were really second-class citizens.

So in the 1980s, we lobbied with Vietnam Veterans of America to get Congress to repeal that law. It took about a decade for that to happen, until 1988, when the logjam was broken and Congress passed the Veterans' Judicial Review Act of 1988 — creating the US Court of Appeals for Veterans Claims.

Once that act was passed, a primary part of our mission was to increase the pool of effective advocates. We did a number of things to try to achieve that mission — one was, we wrote the "Veterans Benefits Manual," published in 1991. It's a treatise on veterans law that's over 2000 pages. A new one comes out every year.

The other thing was, we joined with three other organizations and got a grant to run a volunteer lawyer program for unrepresented appellants.

At the beginning, CAVC had a tremendously high pro se rate — approximately 80% — because few lawyers knew veterans law. So it's been going on ever since 1992 and the pro se rate has dropped tremendously, not just because of the pro bono program, but also because the private bar has increased greatly. Now lawyers are involved in all but maybe 10% or 15% of appeals.

How has the CAVC changed over time?

When we petitioned the court in 1991 to adopt class action rules as part of the rules Congress authorized them to promulgate, the CAVC took the position that it wasn't designed for class actions — that they were too problematic, too much work to put on an appellate court.

And that really is groundbreaking because up to now, they've been deciding individual cases. They don't often set precedents, and even when they do, there's no way for them to make sure they're followed below by the VA — so people continue having to appeal to get the CAVC decisions enforced. But now there's enforcement ability. We've already had two class actions certified, the first two ever certified at the CAVC.

Why is lawyer representation so important at the appellate stage — are there lawyers helping with the initial claims?

In 1862, Congress had provided that a lawyer can't charge a veteran more than $10 on an application for veterans benefits. That actually was a fair price in 1862, when Congress didn't want lawyers gouging veterans, but Congress never changed it.

So over time, it became an economic bar to lawyers representing veterans on claims. Hardly any lawyers did so. And so we lobbied with Vietnam Veterans of America to get Congress to repeal those laws.

The big veterans organizations lobbied hard against changing the fee limit because they were fearful that lawyers would come in and displace their nonlawyer representatives who represented veterans for free before the VA. That fear, which I don't think is well-founded, convinced Congress not to change the law until 2007, when lawmakers allowed lawyers to charge a reasonable fee at a much earlier time — but only after a regional VA office has denied a claim.

Why are veterans legal services necessary?

There really shouldn't be much of a need for us. But unfortunately, especially since the Vietnam War, the government has not done a great job in keeping its obligations to disabled veterans.

Too many cases are wrongly decided. The VA disability adjudication system is difficult to navigate, and the veterans either go at it alone or use veterans' service organizations, which represent them for free with non-lawyers.

Most of these non-lawyers, known as veterans' service officers, are very well-meaning, but they have hundreds and hundreds of cases that are live at any one time. It's very difficult for them to spend a significant amount of time on any individual case, and so they don't have time to do the most important part of effectively representing a veteran before the VA — getting medical evidence to support the claim.

And then, of course, there's the fact that of all the VA's Board of Veterans' Appeals cases that are appealed to the CAVC, the CAVC either reverses or vacates the lower decision in over 70% of cases.

That's a terrible statistic — and it's because the board is more focused on getting cases out the door than on doing an effective job.