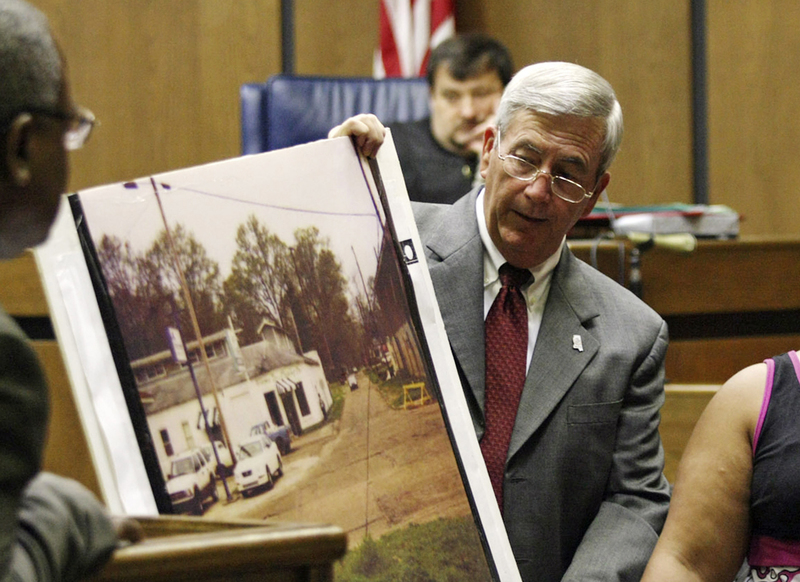 Misconduct by District Attorney Doug Evans, pictured here during a 2010 trial, has led appellate courts to overturn four guilty verdicts against Curtis Flowers, who now faces a seventh trial for the same murder charges. Evans has not been publicly disciplined. (AP)


Small-town Mississippi prosecutor Doug Evans has seen the same guilty verdict and death sentence overturned four times because of his own courtroom misconduct. But that isn't stopping him from trying to drag Curtis Flowers to a seventh trial for the same quadruple murder.

The case had already drawn national attention by the time the U.S. Supreme Court threw out Flowers' latest conviction in June.

The justices noted that Evans had engaged in a slew of misconduct for 22 years. According to court documents, he improperly told jurors about inadmissible evidence, baselessly questioned witnesses' credibility and systematically sought to keep African Americans off the juries deciding the fate of Flowers, who is black. Flowers, meanwhile, has insisted for years that he isn't the one who killed four people at a furniture store in 1996.

Five months after the high court's ruling, Evans was elected to an eighth term as the district attorney for Mississippi's Fifth Circuit Court District. And though in November the NAACP sought a federal court order saying he can't block black citizens from serving on juries, Evans, who did not respond to a request for comment, hasn't received any public disciplinary censure.

That is not unusual. Prosecutors are rarely held to account for misconduct. They're immune from civil lawsuits because of the Supreme Court's 1976 Imbler v. Pachtman decision and are seldom charged for crimes like contempt of court. They may be subject to disciplinary action, but it usually amounts to little more than censure behind closed doors.

Out of 660 criminal cases with a finding of prosecutorial misconduct, only one prosecutor was publicly disciplined, according to a 2011 review of criminal cases in Arizona, California, Pennsylvania, New York and Texas by the Innocence Project.

But even the definition of misconduct is controversial. That Innocence Project report describes it as anything that violates a defendant's rights, a delineation that a court-created New York task force aimed at addressing wrongful convictions said is too broad.

There ought to be a distinction between intentional misconduct and the good-faith mistakes that are sometimes made in "the heat of the battle" during trial, David Hoovler, president of the District Attorneys Association of the State of New York, told Law360.

"You can't have the conversation about prosecutorial misconduct unless you're talking about ineffective assistance of counsel, and you're talking about judicial error," he said. "If a judge allows something to happen, and it's later called prosecutorial misconduct, well then, you have to ask yourself, why did the judge allow it? Why did the prosecutor think it was OK? In a lot of cases, you don't even have a defense attorney objecting to it."

Intentional or not, prosecutorial misconduct is to blame for about 30% of the 2,515 wrongful convictions that have been overturned over the past three decades, according to Sam Gross, senior editor of the National Registry of Exonerations, and yet fewer than 5% of those attorneys see any repercussions.

"Usually, discipline involves professional discipline from a bar association or discipline within the office," he said. "But in most cases, there's no disciplinary action at all."

Some local officials are trying to address this.

In New York, activists have also been pushing for better oversight with an independent review board — but those efforts are being stymied by New York prosecutors themselves.

Last year, Gov. Andrew Cuomo signed a bill to create the independent Commission on Prosecutorial Conduct, a first-of-its-kind body of judges, prosecutors and defense attorneys who would investigate bad behavior. The District Attorneys Association sued to block it, arguing it would unconstitutionally violate the separation of powers doctrine by allowing a "hybrid" political group to control prosecutors who fall under the executive branch.

Both sides await a ruling from a New York state trial court.

Defense attorney Marvin Schechter, a longtime supporter of the commission, said the pending decision could be tied up in appeals for years. Still, he's optimistic the board will eventually be created.

"You can't continue to have a system where the state of New York tolerates prosecutor misconduct on such an egregious and wholesale level," he said.

New York state courts already have grievance committees that can investigate attorneys and have the power to censure, suspend or disbar attorneys for misbehavior — though most of that discipline is never publicly disclosed.

The association itself sent a series of letters to oversight officials, asking that they "expedite the grievance process, with the urgency necessary to restore the public's confidence in its criminal justice system."

"She was making us all look bad," Bitton said.

Rain had argued her actions amounted to mistakes, not willful misconduct. The panel of judges overseeing her case didn't agree, citing "three prior admonitions and a letter of caution," all of which had been doled out confidentially. 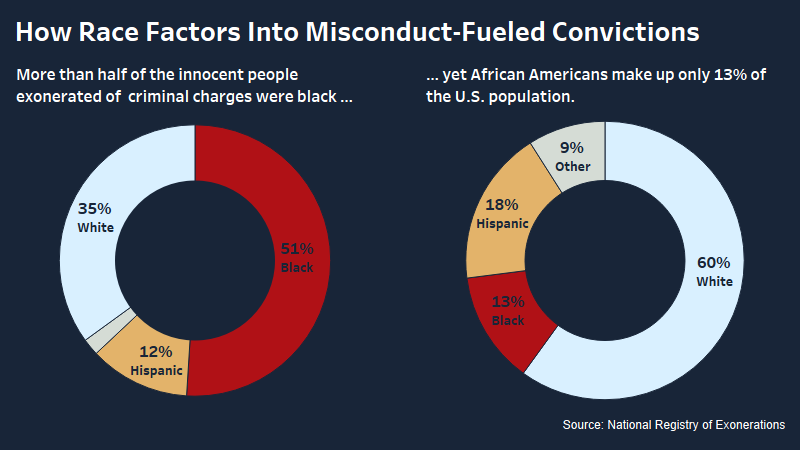 That lack of transparency is a problem, according to Schecter. He wonders how many allegations of misconduct are never publicly disclosed.

That secrecy may be a reason to reform the current system, but Bitton said it doesn't require creating a new one, while agreeing that the committees ought to be "more public."

"If someone is an assistant district attorney and they do something bad, they'll get fired, but the whole process is private. Then they can go apply for a job in another county, and we want to be able to know what happened," Bitton said. "We want this to be a more open and transparent process."

Even when prosecutors are called out publicly, it doesn't mean the defendants they targeted catch a break. Curtis Flowers is scheduled to have a bail hearing next week, but it's still unclear when a Mississippi state court judge will rule on whether he must stand trial a seventh time.

In September, Flowers' attorney, Robert McDuff, asked that the case be dismissed. He argued Flowers' half-dozen trials were "a study in the tactics and circumstances typifying oppressive prosecutorial misconduct."

Perhaps the most obvious remedy for defendants like Flowers — especially if they've been exonerated — would be to pursue their prosecutors in open court. But even the wrongfully convicted can't pursue civil claims against prosecutors.

Prosecutors are immune from such lawsuits because of the Imbler v. Pachtman decision, which found prosecutors cannot be held civilly liable for doing their jobs, even if they break the law in the process. Under Imbler, cities and towns might be on the hook for courtroom misconduct, but their attorneys are not. 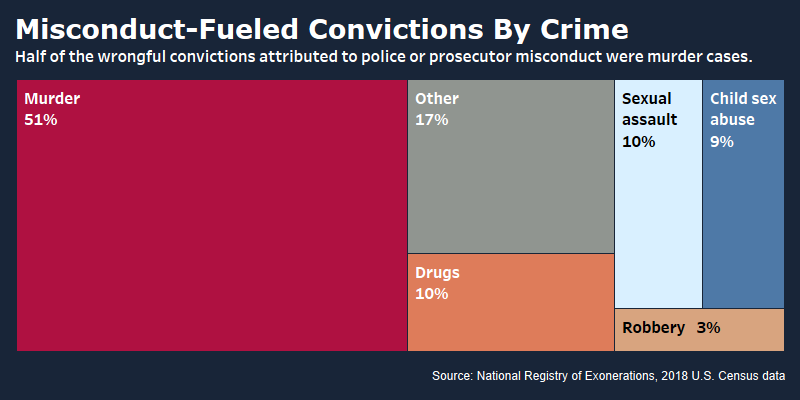 One infamous example is the case of Jabbar Collins, who spent 16 years in prison for a murder he didn't commit. In 2010, the district attorney's office in Brooklyn agreed to vacate his conviction amid allegations prosecutor Michael Vecchione had threatened witnesses, encouraged them to commit perjury and withheld evidence to win his conviction.

But the claims against Vecchione were dismissed.

U.S. District Judge Frederic Block, who made that ruling, told Law360 his hands were tied by the Imbler precedent. Judge Block lamented the fact that Vecchione had "gotten off scot-free" and "suffered no consequences whatsoever."

Vecchione was never publicly disciplined. He retired in 2013, after his boss, District Attorney Charles Hynes, lost his reelection bid. Vecchione did not respond to a request for comment.

Although civil suits like Collins' are barred, prosecutors can legally face criminal charges for crimes like hiding evidence or suborning perjury. A few have been, but their sentences pale in comparison to the jail time their victims faced or served.

And in 2013, Texas state court Judge Ken Anderson was sentenced to 10 days in county jail for misconduct dating back to 1987 when, as a prosecutor, he'd flouted a court order to turn over exculpatory evidence during the trial of Michael Morton, who was wrongfully convicted of killing his wife.

Such examples are rare, according to Bennett Gershman, a former Manhattan assistant district attorney and now a law professor at Pace University.

"It virtually never happens that a prosecutor would be charged for criminal acts relating to his official functions," he said.

There are several reasons prosecutors are hardly ever charged, Gershman said. It's difficult to prove someone deliberately broke the rules, especially when it comes to less clear-cut violations that could have been honest mistakes, like mentioning inadmissible evidence at trial. And disciplinary bodies like state bar associations and grievance committees rarely have the resources to pursue murkier cases.

Politics are also a factor, he said, because of the respect prosecutors command in the legal community.

"The prosecutor stands on a high level in terms of prestige and power, and the prosecutor is seen as serving the community in this very important way," Gershman said. "Lawyers generally don't want to alienate prosecutors. I don't think judges do either. The prosecutor really is kind of insulated from criticism."

There are also a lot of pressures on prosecutors, Hoovler said. And like judges and defense attorneys, they're fallible.

One possible remedy would be for prosecutors' offices to police themselves.

That could become more common, as more major metropolitan areas are electing progressive district attorneys who have rejected tough-on-crime politics in favor of a community-based approach aimed at easing mass incarceration.

These new DAs "are looking at what the consequences should be when appropriate for prosecutors who were involved in past situations where injustices occurred," said Miriam Krinsky, executive director of Fair and Just Prosecution, a group that brings together a network of about 40 progressive prosecutors around the country.

"I think prosecutors are finding their way there. It's difficult to have institutions that will hold their own responsible. That is not always human nature," Krinsky said.

The number of these so-called conviction integrity units has grown nearly quadrupled since 2013, with 58 offices today, and there have been 390 integrity unit-led exonerations since 2003, according to the National Registry of Exonerations. Those units sometimes uncover past prosecutorial misconduct, according to Krinsky.

In Illinois, the Cook County State's Attorney's Office has vacated more than 80 wrongful convictions since 2016, though none of them have stemmed from prosecutorial misconduct.

The office said in a statement to Law360 that if it were to uncover prosecutorial misconduct, it would refer the case to the Illinois Supreme Court's disciplinary commission or to an independent prosecutor like the Illinois attorney general.

And while Philadelphia District Attorney Larry Krasner hasn't filed criminal charges against former prosecutors for official misconduct, his spokeswoman, Jane Roh, said Krasner "is committed to the principle of equal treatment of everyone, and that can be seen in the number of Philadelphia police officers this office has criminally charged."

"The district attorney's office is obligated to pursue criminal charges against public officials or employees whenever the facts and evidence support doing so — that goes for current and prior Philadelphia prosecutors," Roh said.

Krinsky said this could signal a sea change in how misconduct is handled by prosecutors.

Clarification: A graphic on race and convictions impacted by misconduct has been updated to better describe the data. Have a story idea for Access to Justice? Reach us at accesstojustice@law360.com.