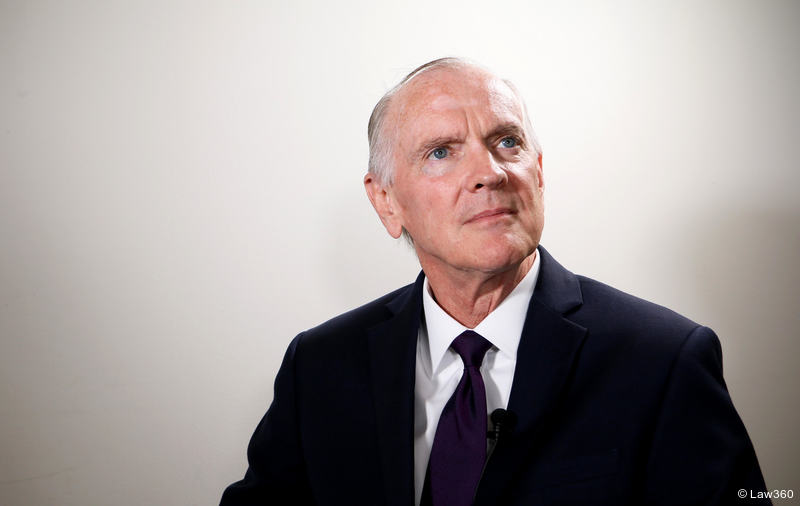 In the wake of announcing his planned departure, Legal Services Corporation President James Sandman is earning props for his work on innovation and securing congressional funding. (Annie Pancak | Law360)


The long-serving president of the Legal Services Corporation, who recently announced that he is leaving his post atop the country's largest funder of legal aid, will be remembered for fostering innovation and for increasing LSC's funding despite calls from the Trump administration to defund it entirely, those in the legal aid community say.

James Sandman, who served as the president of LSC for nine years, announced last week that he plans to step down in February. He told Law360 that he felt it was a good time for the organization to transition to new leadership, especially given that it currently has bipartisan support in Congress.

"LSC is in great shape," he said. "We have a strong and united board. We have a great management team and staff. We just got our largest appropriation ever from Congress."

Sandman said that his time at LSC had been "very rewarding," and that after leaving he hopes to teach and to find other ways to contribute to the cause of access to justice.

Others in the legal aid community said that they were sad to see Sandman go, and praised his work as president.

Don Saunders, a vice president with the National Legal Aid and Defender Association, which works closely with LSC, said that he has been able to see LSC's operation under six different organization presidents and that Sandman very much stood out.

"I remember when he started," Saunders said. "He hit the ground running."

Although President Donald Trump's proposed budget has recommended defunding LSC, the organization received a record $440 million in 2018, with Saunders and others crediting Sandman's ability to effectively convince lawmakers of the importance of legal aid.

Judy Perry Martinez, the president of the American Bar Association, said that Sandman had the ability to tell the story of legal aid providers and their clients in a way that drove home how crucial the services are.

"He told [audiences] about what people who LSC served were facing every day," she said. "One of his most impactful skills is that he tells those stories because he understands the people who LSC's grantees serve."

"He's pushed both legal aid programs, his staff and outsiders to come in and look at how we better deliver services to technology," she said.

Thanks to that approach, she said, her organization was able to develop tools to better help clients, including an online training platform for pro bono attorneys that has greatly helped their work, and that she has heard other providers say they would like to emulate.

"That's been Jim's genius, that he looks beyond what's easiest," she said. "He looks at what's hard and [says] 'How do we do it?' … He finds room for us to be innovative."

He was also a powerful spokesperson for the legal aid community, Rasmussen said.

"Jim has done an amazing job of educating people, both people who are long-term supporters of legal services, but also people who might not think of themselves as supporters of legal services," he said. "Jim has been instrumental at helping to knit together some very powerful support, from corporations, from corporate law firms and from legislators."

Argueta remembered that he was also inspiring for staff, too, and made himself available to grantees.

"He's one of the most accessible presidents of LSC we've ever had," she said. "He's earned the respect of every one of us in the field."

Saunders said he admired how committed Sandman was to talking up legal aid across the country.

"If there was a dinner or an event that asked him to be a speaker, he'll be there," Saunders said.

That determination paid off in the overwhelming support from legislators, as well as business leaders and the legal community, for legal aid, observers said.

LSC has announced that its current general counsel, Ronald S. Flagg, will act as interim chair until the board settles on a permanent replacement. Observers said that they hope the next president will be able to continue Sandman's legacy and match his ability to advocate on behalf of LSC.

"I hope that they're able to find someone who can continue Jim's legacy on innovation," Argueta said.

She added, "I think it's incumbent on his [successor] to connect with the community, all of the legal aid organizations throughout the country. I think that was one of Jim's strong suits, that he got to know us and got to know our staff."

Rasmussen joked that the organization should consider getting "some kind of a clone of Jim."

"We need someone who can, as Jim has done, make clear that civil legal services help our country be better," he said.

Correction: A previous version of this story misstated the name of Legal Services NYC. This error has been corrected.