UK Not Immune To Global Problem Of Accessing Legal Help

A new survey of legal needs in England and Wales found that although a majority of citizens has dealt with a legal issue in the past four years, many people are still uncertain about how to get legal help and many did not get the help they needed, issues that also common in other countries, including the United States.

According to a report from The Law Society, 64% of people in England and Wales have had a legal problem in the past four years, but among those who did, about three in 10 people either did not receive any help or wished that they had received more.

The report concluded that much of this stemmed from lack of familiarity with the law and not realizing there were resources available. 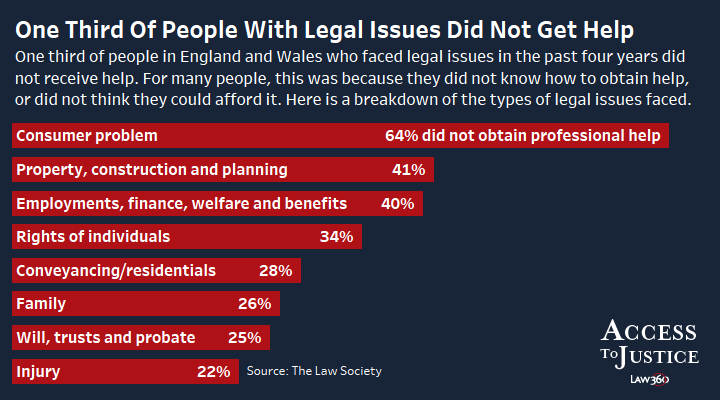 “This extensive survey brings home the need to build better public understanding of legal issues and clear, accessible pathways to get professional legal advice. People need to know how to use the legal system to manage the complexities of daily life, whether that’s housing, family issues or employment,” Law Society President Simon Davis said in a statement.

He also noted that among people who faced legal issues but did get help, 85% were satisfied with the services they received.

Many also did not have to pay for those services, with 57% of people who got help from a professional saying in the survey that the services were free. However, one in five people facing legal issues never even sought help from a solicitor or other legal professional because they assumed it would be too expensive.

“This survey shows near unequivocal support for legal aid but, as people do not understand which issues are covered or if they are eligible, many who should have publicly funded legal advice simply will not get it,” Davis said. “Our future justice system should be one that prioritizes public legal education so people understand their rights, legal issues and how to access justice.”

The report comes as regulators in the U.S. are exploring ways to bring down similar barriers to attorneys and legal aid.

In the 2017 Justice Gap report by the Legal Services Corporation, the largest legal aid funder in the U.S., researchers found that only 20% of low-income Americans seek professional help for civil legal problems, with many saying they weren’t sure where to go for help, didn’t think they could afford it or didn’t know if the issue they faced was legal in nature.

Unlike in the U.K., however, where people have a right to legal representation in both civil and criminal court, most Americans have no right to counsel in civil cases. And as such, the Justice Gap report also identified another major problem for legal service providers in the United States: lack of funding.

LSC-funded organizations were asked to help with an estimated 1 million low-income Americans in 2017, the report said, but only had the resources to fully address the legal needs of about half of them.

Some states are experimenting with ways to bridge that gap, including toying with the idea of giving nonlawyers more of a role to play.

Internationally, both the U.S. and the U.K. outpace many nations when it comes to legal aid, according to a 2016 report from the United Nations, though U.N. still identified areas where both countries could stand to improve.

According to the report, all member states indicated their citizens have a right to legal aid, but not all of them spell out this right in a law or national constitution. Consistent access remains difficult in many countries, too — for example, the report found that less than 40% of less developed countries indicated legal aid was available in rural areas.

Jennifer Smith, executive director of The International Legal Foundation, told Law360 that many of the issues identified in the report on England and Wales are also present internationally.

“In the U.K., just like everywhere else in the world, the real challenge is that people can’t afford access to legal representation,” she said.

And just like in England and Wales, many people around the world don’t know what their rights are or what attorneys might be able to do to help them, making it even more challenging to fulfill those needs.

The ILF, which operates in Afghanistan, Myanmar, the West Bank, Tunisia and Nepal, focuses on criminal representation, but Smith said that the two often go together with many people facing problems that have both criminal and civil components.

Despite the challenges that remain, she said, the international community has become more aware of the importance of ensuring that people’s legal needs are met. If people don’t feel that their legal systems are fair, she said, that can be very destabilizing for a country.

For instance, she noted, the survey on England and Wales found that not having legal representation went hand-in-hand with having a low degree of confidence in the fairness of the legal system.

“One of the conversations that’s really evolved ... is an understanding at the highest levels of government that this is a problem that there are unmet legal needs,” she said. “Twenty years ago, you didn’t have that.”