The $4.3B Question Over What Terrorist Victims Can Recoup 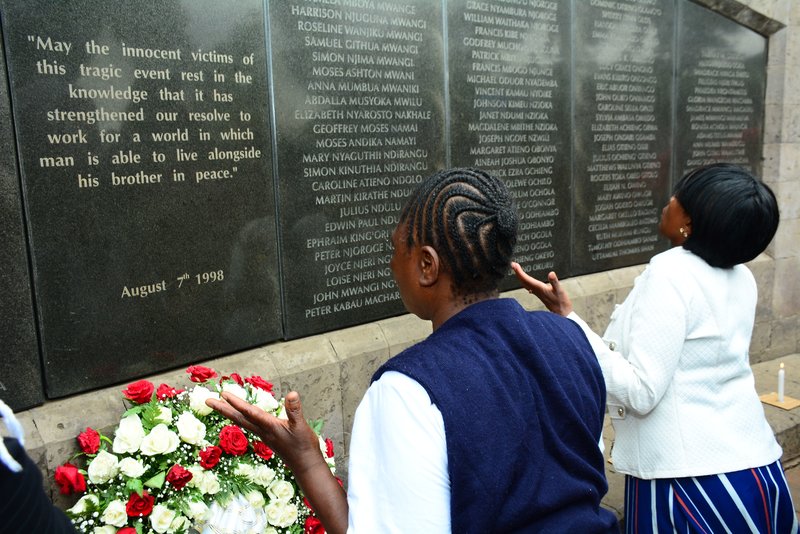 Last year, those impacted by the 1998 bombing of a U.S. embassy in Nairobi, Kenya, commemorated the 21st anniversary of al-Qaida's attacks. Victims and their families are asking the U.S. Supreme Court to reinstate a $4.3 billion punitive damages judgment against Sudan over its alleged role in supporting the terrorist group. (Getty)


The U.S. Supreme Court during oral arguments on Monday will be asked to create a clearer path to punitive damages in certain cases involving state sponsors of terrorism. It's just the latest chapter in a case that highlights the decadeslong legal battles that terrorist victims and their families often face in trying to recoup damages.


August will mark 22 years since Monica Okaba Opati and her siblings lost their mother Caroline Setla Opati to a truck bomb explosion that hit the U.S. embassy in Nairobi, Kenya, where Caroline worked.

For most of the past two decades, Opati has been seeking recompense through the U.S. court system, along with the victims and families of around 150 U.S. employees killed or injured in the 1998 al-Qaida orchestrated embassy bombings in both Nairobi and Dar es Salaam, Tanzania.

On Monday, the families hope to get one step closer with oral arguments set before the U.S. Supreme Court, asking the court to reinstate $4.3 billion in punitive damages against Sudan, which the families argue supported al-Qaida in the years prior to the attacks.

In 2014, a Washington, D.C., district court originally granted the families in the consolidated cases $10.2 billion in default judgments against Sudan, but the D.C. Circuit nixed the punitive damages that was part of that initial award.

A win at the high court, however, would help the families to move forward to the next — also grueling — stage of trying to recoup damages, and it could potentially open the door to punitive damages for several dozen cases involving terrorist acts, according to court filings.

At the heart of the Supreme Court hearing is a 2008 update to the Foreign Sovereign Immunities Act that gave the green light to terrorist victim lawsuits to seek punitive damages.

"Landgraf requires that each new remedy — and in particular, punitive damages — be supported by a clear statutory command of retroactivity," Sudan argued in a brief.

The families, however, say that Congress intended punitive damages to apply retroactively with the 2008 update and that the Supreme Court's 2004 ruling in Republic of Austria v. Altmann

says courts should defer to the judgment of Congress when considering Foreign Sovereign Immunity Act cases.

"Nothing in the 2008 amendments even remotely suggests an intent to close the courthouse doors to victims of state-sponsored terrorism with state-law claims," the victims told the Supreme Court in a recent brief.

Counsel for the victims did not respond to requests for comments.

A chief ally for the victims on their interpretation of Congress' intent is the U.S. government.

In a brief, the government noted that the 2008 update to the law was delayed by then-President George W. Bush until it could be amended to protect Iraq from the imposition of punitive damages due to diplomatic concerns. This, the government and the families say, shows that both the White House and Congress understood the amendments would apply retroactively.

Solicitor General Noel Francisco, whose office is scheduled to argue this point before the Supreme Court justices on Monday, said it is important that the justices resolve the confusion and clearly rule in favor of the government's reading of the law.

"The question is important. It affects, in these cases alone, billions of dollars in punitive damages judgments awarded to approximately 150 U.S. government employees and contractors who were murdered or injured in the line of duty because of their service to the United States, as well as hundreds of their family members," the solicitor general's office said in a brief to the court.

Counsel for the victims noted in a brief to the court that they have identified at least 75 Foreign Sovereign Immunities Act cases involving pre-2008 state-sponsored terrorism acts that have received or are seeking punitive damages. A win in the Opati case could help create or preserve punitive damages in several of these cases.

Under the Foreign Sovereign Immunity Act, only foreign states designated by the U.S. Department of State as state sponsors of terrorism can be sued over terrorism. Currently, that list of foreign states includes Iran, North Korea, Sudan and Syria.

Sudan, which has staunchly denied the allegations in the suit, has decried the rise in no-fault judgments against it and other states on that list and said it is an impediment to better diplomatic relations.

"The frequency of runaway default-judgment awards likely serves as a further deterrent to an appearance by a foreign-state defendant, which may reasonably conclude that the action against it is a political tool devoid of the fair administration of justice," Sudan said in a brief.

Osama bin Laden lived in the country from the early to mid-1990s, but Sudan denies providing "material support" to his terrorist activities and deported bin Laden in 1996. The country has also called several technical fouls in how the Washington, D.C., case proceeded in the lower court.

Sudan contends its internal struggles with civil war and natural disasters played a large role in its default.

The appeals court, however, tossed out that argument. "By defaulting, then appearing, then defaulting again [after the initial default had been vacated], Sudan delayed this case for years beyond its likely end had it simply failed to appear at all. These affirmative actions extended the delay and make Sudan's second default even less excusable than its first," the D.C. Circuit said in its opinion.

Christopher Curran, a White & Case LLP partner representing Sudan in the Supreme Court case, declined to comment for this article, given the pending litigation.

The sovereign state has filed its own petition asking the Supreme Court to review the case and challenging the default judgments on several grounds, including the admissibility of a plaintiffs' expert who the country says introduced hearsay into the court proceedings.

Even with a win in the Supreme Court, recouping any funds will likely be another long fight.

As the embassy victim cases show, getting a final judgment in lawsuits against sovereign states can take decades. The next step of securing assets to pay those judgments can take just as long — if not longer — if the sovereign state digs in its heels, according to experts.

Since the 1996 passage of the Foreign Sovereign Immunities Act, courts have awarded approximately $90 billion against these states, according to a December 2019 Congressional Research Service report.

"Although these states have largely not participated in this litigation at the merits phase, some of these states have appeared in court to attempt to prevent plaintiffs from collecting their assets," the Congressional Research Service noted.

The U.S. government has tried to alleviate some of the challenges by establishing in 2016 the United States Victims of State Sponsored Terrorism Fund.

Seeded with an initial $1.025 million and additionally funded by the sale of forfeited property or other penalties imposed on certain state actors, the fund provides at least some compensation to those in the U.S. who hold a final judgment against a foreign state sponsor of terrorism, as allowed under the Foreign Sovereign Immunities Act.

Still, the fund cannot cover all the judgments. It is unclear whether the families involved in the Sudan suits, who are largely foreign nationals, can participate.

Suzelle Smith, a Los Angeles name partner at Howarth & Smith who has represented terrorist victims in a number of other suits, said cases like the Sudan suits still take decades to resolve and that federal courts often place hurdles to recovery.

Smith does not seek punitive damages for her clients because they are so hard to collect. She added that given the limited assets often available to terrorist victims, it can be unfair to allow one plaintiff to collect potentially hundreds of millions, while another victim collects nothing.

"Courts have been reluctant to allow that to happen, and in the last 10 years, I do not know of a case where punitive damages have been collected as opposed to awarded," Smith said.