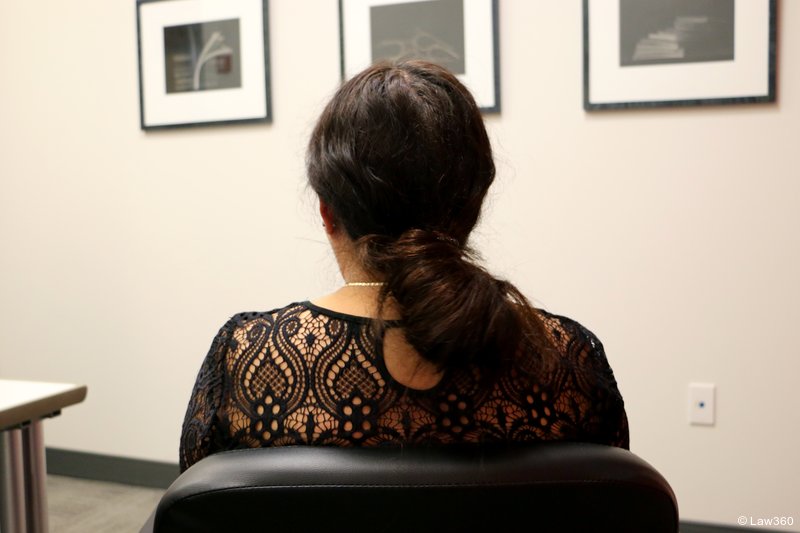 
For more than a decade, Maria's life partner verbally and physically abused her. As an undocumented immigrant, she knew calling the cops could lead to her own deportation, so she endured his attacks rather than risk being sent back to Mexico.


But after her abuser turned on her children, Maria decided to face her fears and report him to the police. Her testimony helped lead to an arrest, and in the process, she became eligible for a special visa she never knew existed: the "U visa."

Created by Congress in 2000 to encourage undocumented victims of crime to come forward, the U visa provides four years of legal immigration status and a path to a green card to those who cooperate with authorities. It can also extend to encompass some family members and children.

With pro bono help, Maria applied for the program in August 2015 and settled in to wait for a response. But as days stretched into weeks, she remained in the dark. Weeks turned into months that became years without any government protections being issued. All the while, Maria knew U.S. Immigration Customs and Enforcement, or ICE, could come busting through the front door on a tip from her old abuser.

"My family would say to me, 'What happened with your application?'" she remembered. "I told them, 'I don't know.'"

Maria, who spoke on the condition of anonymity, wasn't alone. Though law enforcement and victims' advocates alike have praised U visas for helping police fight crime, the government caps annual grants at 10,000 — a fraction of the 33,850 petitions received, on average, during each of the past four years.

In a video interview with Law360, Maria said, "It is very difficult not to have papers. I always worked in cleaning. I would go to look for a job and they would say, 'Do you have papers? You cannot work.'" (Annie Pancak | Law360)


The resulting backlog means that today's visa-eligible applicants will not actually receive a U visa for approximately 15 years.

While waiting, an estimated 80% of these crime victims should qualify for employment authorization and "deferred action" deportation protection. But under the Trump administration, the processing time for even those preliminary U visa benefits has ballooned from less than two years to more than four and a half.

As a result of the swelling delays, applicants — mostly women, 75% of whom suffered intimate partner crimes like domestic violence or sexual abuse — are increasingly exposed to continued abuse and potential removal from the country.

Leslye Orloff, director of the National Immigrant Women's Advocacy Project at American University, said that oftentimes, vengeful perpetrators are "actively trying to get these victims deported."

"From the time a victim gets [law enforcement] certification until their case is approved, that is the most dangerous time," Orloff added.

She would know: in 2007, after it became clear that the annual 10,000 visa limit would leave otherwise eligible victims vulnerable, Orloff helped draft the statute that allows applicants to receive deferred action and work authorization while stalled on the ever-growing visa wait list. 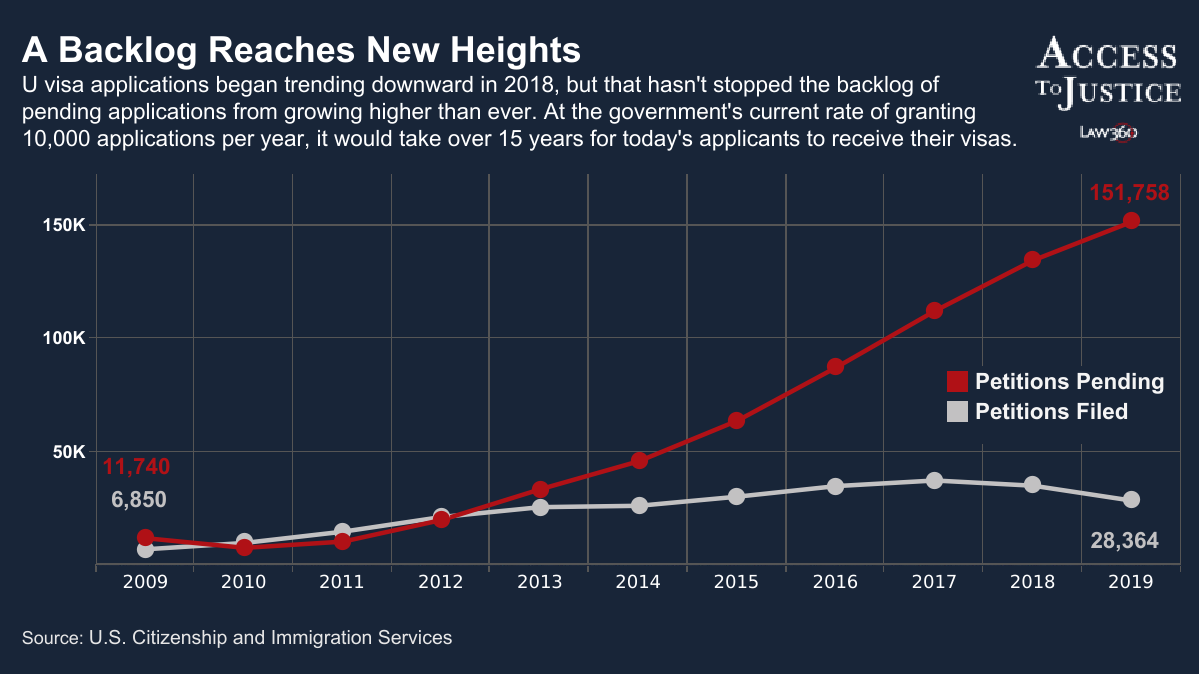 Despite the law, however, Orloff's subsequent research has found that one in three applicants wind up subject to deportation before ever receiving the pre-visa protections that could have saved them. She said the issue was a primary concern at a recent training she conducted for law enforcement.

"In a room full of 50 prosecutors, the first question I got was, 'How do we stop these perpetrators from making our victims disappear before trial?'" she recalled.

To reduce the amount of time people spend unprotected, some advocates have relied on litigation. In July, for example, a South Carolina federal judge blasted U.S. Citizenship and Immigration Services for waiting more than three years to grant pre-visa protections to nine crime victims and their families.

In that case, the agency had claimed a lack of funding and staff resources caused the delay. But U.S. District Judge Margaret B. Seymour rejected the argument outright and ordered USCIS to make a decision within a month.

"Were the court to accept this rationale, it would essentially endorse the notion that any delay by USCIS is immune from judicial review where USCIS claims inadequate funding," she wrote.

She also cited USCIS testimony in finding that the agency "effectively if unofficially" completed its eligibility determination within the first 15 months of an application being filed.

In another case, the agency claimed one victim's three-year wait for pre-visa protections was reasonable because it fell within what was then the average processing time range.

That motion to dismiss was denied by U.S. District Judge John Z. Lee, who ruled in February that "an unreasonable delay that applies to every applicant is still unreasonable."

"Otherwise, the agency could defer review of petitions for years or even decades," he added.

Despite those rulings, "decades" seems to be the direction in which wait times are trending. 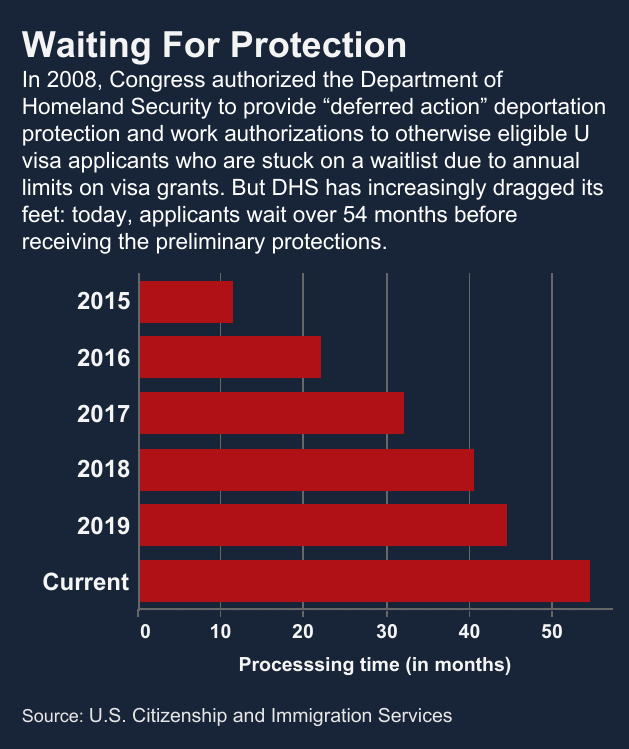 According to USCIS data, the delay from filing an application to receiving work authorization and deferred action status nearly doubled from 2016 to 2018, despite total applications from victims and their family members decreasing during the same time period. Today, USCIS reports that wait times exceed 54 months — a nearly fivefold jump since 2015.

Some critics of the program have said the lengthy review is necessary to prevent bogus visa bids. But because the U visa application requires certification from a local law enforcement agency that a victim "has been helpful, is being helpful, or is likely to be helpful," pulling off a fake application is no easy feat; a conniving fake victim must convince law enforcement of a hoax and then be prepared to wait years for any benefit.

Nevertheless, fraud is occasionally attempted: a Feb. 3 announcement by the U.S. Department of Justice stated that a Minnesota woman had been indicted for allegedly accepting payments to slash undocumented immigrants with a box cutter so that they could file false police reports and then apply for U visas.

To prevent gaming the system, some agencies are stingy with certifications. The Miami Police Department, for example, reportedly granted just 27 out of 235 requests in the past three years.

But technically, a certification can be granted even if no criminal charges are filed. As a result, Dan Cadman, a retired ICE official who now writes for a conservative-leaning think tank called the Center for Immigration Studies, has publicly questioned whether some police and prosecutors are being "overly lenient."

"It's no skin off their nose to police or prosecutors if they sign off on the application and later decide not to pursue charges against the perpetrator," he noted in a February 2018 critique of U visas.

Fraudulent or otherwise, applicants are encountering new barriers due to recent policy moves by the Trump administration. The first critical change came in November 2018, when USCIS began initiating removal proceedings immediately upon denying a U visa application; as a result, a crime victim whose application is rejected may have effectively turned herself in.

At the time, a USCIS spokesperson told Law360 that the change was intended to preserve "fidelity to the law."

A more recent hurdle came in December, when USCIS posted a note on its website stating that all blank fields on a U visa application must be filled out — even if they do not apply to the applicant.

An applicant with no middle name, for example, most know to write "n/a" or "none" in the corresponding blank field to avoid rejection. The American Immigration Lawyers Association has collected over 140 examples of "incomplete" forms: one applicant was reportedly rejected for entering the names of three siblings on a field that had four blank spaces.

According to Susanna Saul, an immigration attorney at the nonprofit legal aid group Her Justice, this latest change to U visa policy "sends a clear message that they are using bureaucratic measures to funnel down the number of people applying."

A USCIS spokesperson said the change "saves both the applicant and the agency time" because incomplete applications slow down the process.

"Complete applications are necessary for our adjudicators to preserve the integrity of our immigration system and ensure they are able to confirm identities, as well as an applicant's immigration and criminal history, to determine the applicant's eligibility," a USCIS spokesperson said in an email.

The spokesperson added that a rejection due to incomplete fields is not a denial and the applicant can reapply. Still, Saul said the recent change is just one more reason that victims are applying in fewer and fewer numbers. The number of U visa applications declined in 2018 for the first time ever. Last year, the volume decreased again, to its lowest level since 2014.

"In our experience, the U visa has been registered virtually meaningless in the lives of our clients," Saul said.

Orloff said that the easiest way to protect applicants and reinvigorate the program would be for USCIS to issue work authorizations and deferred action status more quickly, as authorized by the 2007 statute she helped write.

Both the Obama and Trump administrations have refused to do so on the grounds that diverting resources to make faster preliminary pre-visa protection decisions would lead to an even longer wait time for the actual visas. But Orloff said the longer wait time would be mitigated by swifter protections.

"It's better for victims to get work authorization and deferred action sooner," Orloff said. "And the agency has the power to decide earlier — they just haven't done it."

Another policy solution would be to raise the cap, but that's easier said than done. The famous "Gang of 8's" immigration reform proposal of 2013 sought to expand the cap to 18,000, and in 2017, U.S. Rep. Julia Brownley, D-Calif., proposed a bill to raise the ceiling to 40,000 applications. Neither proposal has become law, however.

With Congress looking unlikely to make any sudden changes, and USCIS only increasing barriers and delays, litigation may be the only way for immigrant advocates to speed things up. 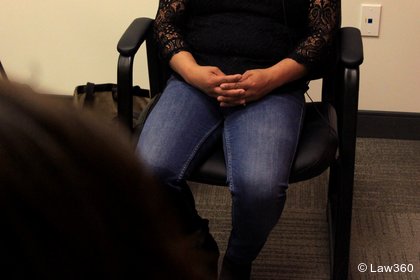 Maria waited four years for protection from deportation. At current processing rates, she could wait more than a decade longer for the actual visa. (Annie Pancak | Law360)

Building on the individual successes of previous immigrant suits, a proposed class action filed in September aims to require that USCIS issue work authorizations to an estimated group of more than 100,000 victims.

According to the complaint, one of the lead plaintiffs helped get her abusive ex-husband convicted and deported more than four years ago, but she still hasn't gotten anything in return for the testimony. Another plaintiff allegedly survived an attempted murder and helped put the attacker behind bars, but over two years later, he's still waiting for word on his application.

In Maria's case, the delay ended up being a full four years; her work authorization papers arrived in September, and she now has legal working status for the first time in her life.

The U visa itself could still be over a decade away, and there's no way of checking her place on the wait list.

"I am thankful to God for everything, for all the people that protected me," Maria told Law360 in February. "It was harder not to have papers."