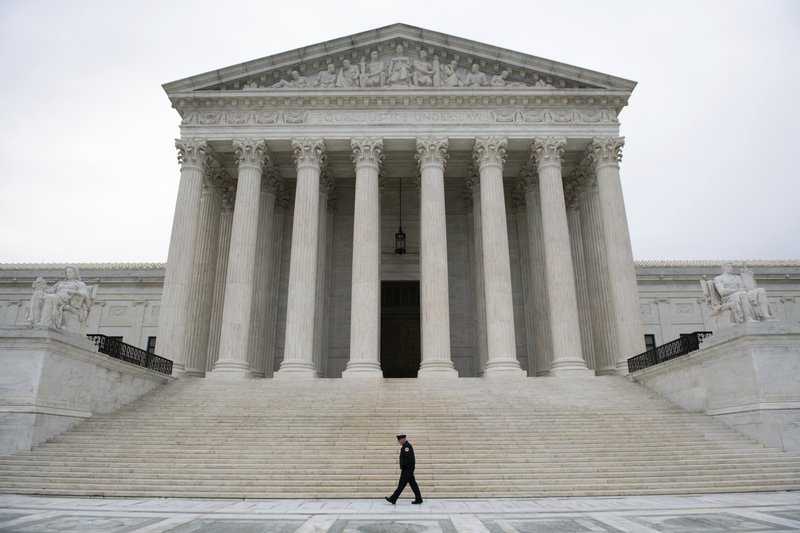 The U.S. Supreme Court announced last week that it would break with tradition and allow oral arguments to be broadcast live. Accountability advocates lauded the decision and hope it will usher in an era of transparency. (AP)


The day after the U.S. Supreme Court announced that the public could listen live to its telephonic oral arguments, the Eighth Circuit gave listeners a taste of what proceedings might sound like.


U.S. Circuit Court Judge William Duane Benton asked his fellow panelists Tuesday if they could hear him, and after each of them affirmed they could, he uttered a plucky, "Great!" Then he asked his clerk, "How many public listeners do we have? They can dial in, you know."

Six people were listening in on the telephone line.

The case that day — an appeal alleging SquareTrade Inc. had settled a copycat class action in Iowa to kill an original lawsuit in New York — hardly has the same pull as upcoming high court arguments over subpoenas of the president's financial records. But Judge Benton still had some advice that could benefit the justices.

"I would ask counsel to speak distinctly," he said. "I've done these before, and that is the real challenge for all of us, including the judges."

Concern about spreading COVID-19, the disease caused by the novel coronavirus, has shuttered courthouses nationwide. It pushed back the Supreme Court's April oral arguments, then forced justices to announce last week that they would hear from attorneys telephonically in May. Now, the high court and some federal appellate judges have decided to open their courtroom doors virtually, using livestream technology they'd previously shunned.

Advocates hope the change sticks after the virus runs its course and courthouses reopen.

Livestreaming amid a public health crisis ought to show the courts how easy it is to disseminate audio in real time, and could perhaps convince the third branch to join Congress and the president in "the television revolution of the 1950s," according to Gabe Roth, executive director of Fix the Court, a nonpartisan court accountability group.

"If you can do this now during a pandemic when everyone's all over the place, then there's really no excuse for not doing the same when things return to normal," Roth said.

Roth and others have framed the livestreaming of proceedings as a matter of public courtroom access. Any American should be able to view, in real time, the arguments being made to the country's top tribunal, he said, and an aural or visual medium will draw in more people.

"If you want to have a well-educated populace, it's the responsibility of government, no matter what branch, to reach people where they're at. And where they're at is on their couches watching CNN. Where they're at is scrolling through Facebook and Twitter," he said. "If there's a video of what's going on, you're more likely to look at it than a transcript written in a font that was created in the 18th century."

Only two lower federal appellate courts, the Ninth and D.C. circuits, allowed for live listening or viewing of their oral arguments prior to the pandemic, but that's changed in recent weeks.

The Eighth Circuit, for example, used to post MP3s of its oral arguments within 24 hours of the proceedings. Now, it's among eight of 14 federal appellate courts allowing the public to listen live from afar.

The high court's announcement a week ago that it would broadcast 10 live oral arguments in May was a sharp departure from its usual practice. Typically, the court only allows 50 to 70 observers into the gallery, releases same-day transcripts of the arguments, and unveils audio at the end of the week.

That model was broken, according to Anthony Marcum, a fellow at the R Street Institute, who said the delay was untenable.

"Before the recent policy change, the Supreme Court was asking the public to wait hours for a transcript and days for audio," he said. "It's unreasonable today to ask the public to sit outside, often overnight and in the cold, for a chance just to grab a ticket and attend a hearing."

The reasons justices have given in the past for adhering to this model range from tradition and decorum to concerns that the public would be put off by the devil's advocate approach many jurists take during oral arguments.

Some of the court's newer members vowed to change that policy.

During her 2009 confirmation hearing, Justice Sonia Sotomayor said she'd had "positive experience with cameras" as a federal judge. She told senators that she'd been "a really good litigator," and would persuade her future colleagues to "consider taking new approaches."

But in the end, Justice Sotomayor was the one who changed course. Four years after the hearing, she told New York Magazine that a video broadcast of high court proceedings "could be more misleading than helpful" for the public. Justice Elena Kagan made a similar about-face after being confirmed.

"A lot of the justices, once they get onto the bench, seem to flip, saying, 'We are open enough. People can walk in our doors and come see an argument,'" said Melissa Wasser, a policy analyst at the Reporters Committee for Freedom of the Press, which has long advocated for public access, especially to newsworthy hearings.

Advocates have pressed for the court to reconsider its policy for cases of national importance, but with mixed success.

The court did release same-day audio of its proceedings in the 2018 challenge to President Donald Trump's "travel ban" on immigrants from Muslim-majority countries and the 2015 gay marriage equality case.

But in October, the Reporters Committee wrote Chief Justice John Roberts asking for live audio access to arguments that would determine the future of on-the-job gender identity discrimination and the Deferred Action for Childhood Arrivals program.

The group argued the court's usual policy of releasing audio recordings at the end of the week would make it difficult for reporters to offer same-day coverage for which the public was hungry.

"There is a strong interest nationwide in closely following these proceedings as they occur, in as close to real-time as possible," the committee said in its letter. "The Supreme Court is the ultimate people's court and there is a strong ... constitutional imperative that the people be permitted to observe its proceedings in matters of abiding public interest."

In a one-paragraph, same-day response, the high court's public information officer replied that "the court plans to follow its usual practices," reminding the reporters they'd have same-day access to the transcripts.

But Wasser said that makes life harder for her members, especially broadcast journalists.

"Having audio posted at the end of each week really slows down the reporting in real time," she said.

Her organization has had more luck at the circuit court level.

In October, the Second Circuit granted the Reporters Committee and Fix the Court's requests to live broadcast oral arguments in the suit over Trump's tax returns, drawing 40,000 live listeners. In December, the Fourth Circuit granted a request to broadcast arguments over the president's alleged emoluments clause violations.

Wasser hopes the networks will collaborate to collect viewership numbers on May's live Supreme Court arguments, so they can show the justices at the end of this term that there is public interest in continuing to broadcast in real time.

"Having that data will be so helpful to court transparency groups to be able to show the court, 'Look, you did this, and the sky didn't fall,'" she said. "So much of what we have been hearing from the court is, 'We can't hurt the sanctity of the court. This will ruin our tradition.' But pandemic or no pandemic, you should continue to do what is most transparent and accessible for the American people."