For The Homeless, Virus' Threat Also Brings Hope For Reform 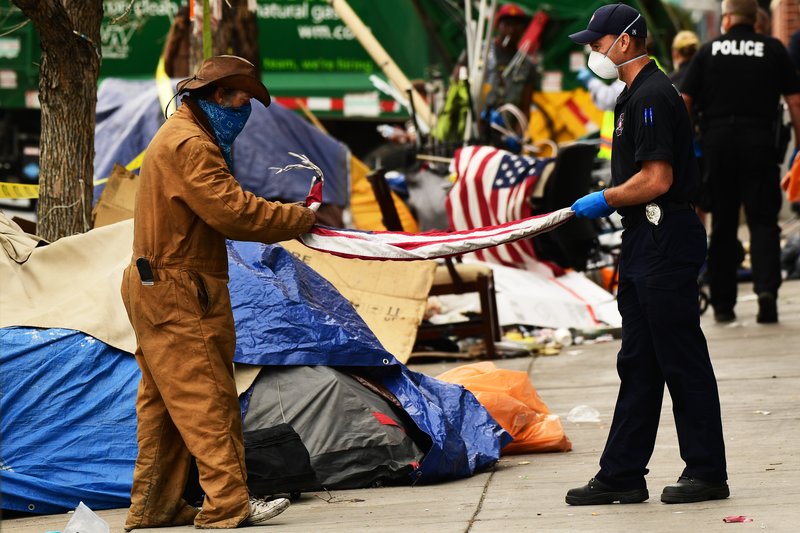 The city of Denver continues to break up homeless encampments, even amid statewide orders to shelter in place because of the coronavirus pandemic. Advocates say such law enforcement efforts not only criminalize homelessness but also raise public health concerns. (The Denver Post via Getty Images)


It's been longer than a month since Colorado Gov. Jared Polis issued a stay-at-home order requiring that residents self-isolate to stem the spread of the novel coronavirus. But the phrase "stay at home" is fraught for the estimated 9,600 Coloradans struggling with homelessness.


Sue Sanders is one of them. When she learned of the order, she'd been living in her car for two years.

But it was cold and snowing in the city of Centennial, and the recreation center where Sanders often showered had closed. She considered staying at a shelter, but she's immunocompromised, and the prospect of sharing space with others seemed dangerous even before the pandemic.

Now, it's dangerous for everyone. Shelter beds are spaced only three feet apart, not the six-foot distance recommended by the Centers for Disease Control and Prevention, and bathrooms and dining spaces are small and shared. That's according to a writ of mandamus filed against the Colorado Department of Public Health and Environment. The court filing called Colorado's shelters coronavirus hot spots.

Jason Flores-Williams, the attorney representing five advocacy groups and two homeless individuals who filed the writ in April, said his clients want the state to find safe housing for its homeless population. As things stand now, he said, "there is an equal protection violation lurking here," because it's easier for housed residents to obey Colorado's stay-at-home order.

"It shows this blatant hole in the government's thinking, that they would simply issue a law, and there is a whole class of people who do not have the ability to comply," he told Law360. "They're saying, 'Everybody has to self-quarantine,' and then you've got shelters all across the state where people are crammed in like sardines. The law is creating a disparate impact."

If people who are homeless want to socially distance, he said, their only option is to sleep outside. But that makes recommended hygiene practices like hand-washing difficult, and encampment denizens are subject to police sweeps, move-along orders or citations.

Advocates across the country have long argued that local laws barring public camping and living in a vehicle only serve to criminalize homelessness and poverty. But the problem is exacerbated during coronavirus. The homeless population is vulnerable to the disease, both from public health and legal standpoints.

Now attorneys are arguing cities and states ought to provide housing to those who don't have it, to stop the spread of the virus and ensure the homeless enjoy equal protection under the law.

Flores-Williams — who previously won a class action settlement for Denver's homeless population that changed how the city enforces its urban camping ban — said the public health crisis has created an opportunity.

"Having these state and national states of emergency declared opens up a window for all sorts of legal strategies," he said.

Now, impact litigation across the country is using novel legal arguments, invoking state-created danger doctrine, the Fourteenth Amendment and the Americans with Disabilities Act, according to Sara Rankin, a law professor at Seattle University.

"There's going to be a very interesting suite of legal challenges," she said.

Some local governments have suspended laws that target homeless communities. Washtenaw County, Michigan, and San Francisco have put a moratorium on clearing homeless encampments. Seattle and Washington, D.C., have eased parking restrictions that can affect people living in their cars. Ohio expressly exempted the homeless from its stay-at-home order.

Advocacy groups like the National Law Center on Homelessness & Poverty have embarked on campaigns to encourage more communities to follow suit. They've also pursued impact litigation to suspend punitive laws, especially ones that displace people who are housing insecure, according to Eric Tars, NLCHP's legal director.

"These ordinances criminalize the basic life-sustaining activities that you and I do every day. We eat, we sleep, we shelter ourselves, we sit down, we go to the bathroom. All these things are perfectly acceptable and necessary to sustaining life if you do them inside," Tars said in an interview. "But they are used by communities to criminalize the act of living outdoors."

Such laws have been on the rise, according to an annual survey conducted by the NLCHP, Dechert LLP, Sullivan & Cromwell LLP and Kirkland & Ellis LLP.

Last year, 72% of 187 surveyed U.S. cities had at least one law on the books restricting camping in public. Since 2006, 33 new laws barring camping citywide have been enacted, marking a 92% increase, according to the 2019 report.

That only serves to criminalize people struggling with homelessness, Tar said.

"They're getting fines and fees that they can't pay or they're being put in jail, where we've seen these outbreaks of COVID-19," Tars said. "Jail is the last place you'd want them to go right now."

Those laws continue to be enforced, and that jeopardizes public safety during an epidemic, Rankin said.

"Some jurisdictions are reacting to COVID-19 by increasing sweeps, which have been shown to increase the rate of transmission," she said. "The Centers for Disease Control admonishes jurisdictions against doing that unless you have a place to send people. It's a real threat to public health."

The homeless and housing insecure are also more vulnerable to COVID-19. According to a new study from the University of Pennsylvania, people who are homeless are twice as likely to require hospitalization, and two to three times as likely to die from the COVID-19 than the general population.

That's given fresh urgency to impact litigation over homelessness.

Take for example a case filed against the city and county of Los Angeles by the LA Alliance for Human Rights, a coalition of business owners, residents and homeless people on Skid Row.

The suit alleged local government officials hadn't done enough to address a 75% surge in the local homeless population, outbreaks of "medieval diseases" within encampments, and a staggering fatality rate of three deaths per day.

The plaintiffs, represented by Matthew Umhofer of Spertus Landes & Umhofer LLP, invoked the ADA, nuisance law and environmental law. They sought injunctive relief in the form of more shelter beds.

Umhofer began building the case a year ago, long before the novel coronavirus outbreak. But weeks after the complaint was filed on March 10, U.S. District Court Judge David Carter was ordering the installation of 50 toilets and sanitation systems near Skid Row, noting "if left unchecked, it is likely that the coronavirus will both devastate the vulnerable homeless population and exacerbate the existing public health crisis."

When some cities expressed concern about Project Roomkey, a state program to put vulnerable homeless populations in empty hotel rooms, Judge Carter held a status conference — in an off-site ballroom, to encourage social distancing — and addressed the reluctant towns' concerns.

"It presents an opportunity," Umhofer said of the virus. "If we can get people into some form of housing, even just a motel for 30 to 60 days, we can move them then into more sustainable forms of shelter. And that's the plan here that Judge Carter has laid out."

Umhofer said he also believes the virus may have hastened the government's response to the litigation. Less than two months into the case, the city council voted to enter into settlement talks. Umhofer called that "lightning speed" for litigation like his.

Another federal lawsuit, put together by NLCHP and others, targets two San Diego ordinances that outlaw staying in vehicles overnight. The putative class action brought by housing insecure residents alleges the laws allow the city to impound and tow cars, leaving many residents completely homeless. The suit was filed in 2017, but Tars plans to seek a temporary restraining order on enforcement in light of the pandemic.

"That vehicle is your means of sheltering in place," he said. "You're destabilizing somebody at a time when you're ordering people to be as stable as possible."

The litigation in Colorado aims to knock down another type of local ordinance that harms people with limited housing options — limits on how long people can stay at hotels.

Last month, Sue Sanders found living in her car during the Colorado winter was making her feel rundown and vulnerable. She managed to get a voucher, then charitable donations to stay at a Motel 6 in the town of Greenwood Village. But thanks to an ordinance limiting stays in rooms without kitchens to 29 days, she was forced to leave.

Neza Sarkari, who manages the motel, said she wanted Sanders to stay. She also tried coordinating with the city of Denver for a program similar to California's Project Roomkey, that would allow vulnerable homeless residents to stay in her rooms. But Greenwood Village wouldn't allow it.

"It's stopped me from contacting charitable agencies," Sarkari said. "There are no homeless resources available in Greenwood Village, so when we have to push people out due to the ordinance, we are literally sending them to the streets."

Such individual local laws could be put on hold under the state's declared emergency, according to Flores-Williams. He hopes to force the state's hand with the writ of mandamus.

"All they have to do is issue an order saying, 'These ordinances, for the purposes of this crisis, we are lifting them.' All of a sudden there would be all this safe housing," he said.

Whatever happens with the Colorado suit, both homelessness and the pandemic show no signs of abating, according to Benjamin Dunning, an organizer with Denver Homeless Out Loud, one of the litigation's plaintiffs. In fact, he says, the two crises are feeding one another.

"What do you think is going to happen with all these folks filing for unemployment in three to six months?" he said. "A good percentage of them are going to end up out on the street."