Have A Criminal Record? COVID-19 Relief May Be Out Of Reach 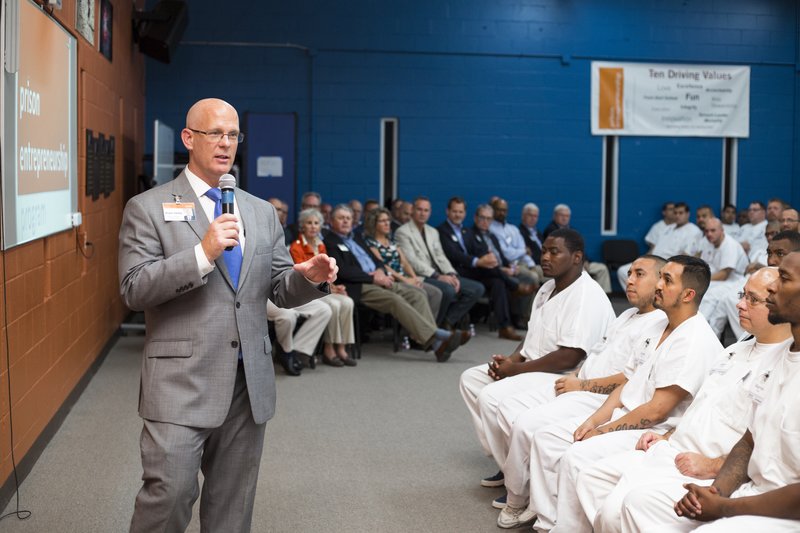 Bryan Kelley, CEO of the Prison Entrepreneurship Program, has helped formerly incarcerated people launch more than 500 small businesses. But none of those businesses have received COVID-19 relief due to government exclusions for people with criminal records.


Corey, a formerly convicted felon who asked to be identified by first name only, runs a successful landscaping business in Houston. Two full-time and six part-time employees rely on his company to provide for their families, but ever since the ongoing COVID-19 pandemic was declared a national emergency on March 13, more than 75% of the Corey's revenue stream has dried up.


To assist small business owners during the unprecedented crisis, President Donald Trump signed the Coronavirus Aid, Relief, and Economic Security Act, or CARES Act, on March 27. Among other things, the legislation allocated $349 billion to the Small Business Administration for a "Paycheck Protection Program" of forgivable loans, plus an additional $10 billion for grants of up to $10,000 — literally free money, with no payback required.

As of April 24, more than a million of those grants, known as Economic Injury Disaster Loans, or EIDL, had been paid out; over the same period, the PPP loan program had provided more than 1.6 million loans through nearly 5,000 banks.

Corey tried applying for both programs. But due to eligibility restrictions for those with criminal records, he said he's "received zero funds from the federal government."

Corey is not alone. Bryan Kelley, CEO of the Prison Entrepreneurship Program, has helped 2,600 formerly incarcerated people learn the ins and outs of starting a company via a nine-month entrepreneurship boot camp inside prisons. Graduates like Corey have gone on to launch more than 500 small businesses, but Kelley said none of them have reported receiving money from the SBA during the ongoing pandemic.

They don't have the time to do character assessments. The attitude was: How do we make things easy to deal with? 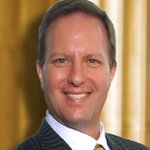 "Guys either got denied or never heard back," he said.

Like 1 in 3 Americans, Kelley, too, has a criminal record — in 1991, he was sentenced to life in prison for murder, and went on to serve 22 years in Texas prisons. While incarcerated, he got involved with PEP and turned his life around; now he manages a business with 30 employees, roughly 80 percent of whom are ex-felons who also went through the program.

He said the SBA's eligibility restrictions on people with criminal records are especially damaging because, in a world of nearly universal employment background checks, entrepreneurship is often an ex-inmate's best chance at earning a sustainable level of income.

"For our guys, who are often unskilled, with that X on their back ... to usher themselves into the middle class, entrepreneurship is what you need to do," Kelley said.

But business owners with criminal records have long run up against obstacles when seeking the loans they need to build their companies. Corey, who was convicted in 2002 for aggravated assault with a deadly weapon, said he was ignored two years ago when trying to get a loan from local banks, even though he completed his entire sentence, including parole, in 2012.

"When I walk in and say I have a business earning $250,000 in annual revenue with two employees, they're into it," he said. "But once I give them my information ... crickets."

New Twist on an Old Question

At the SBA, loan application forms have long included questions about prior criminal involvement. Ian Berkowitz, a former attorney adviser with the Small Business Administration who for the last two decades has helped clients obtain SBA loans in private practice, said he always conducts a background check on potential clients because "I'm not going to waste their time if I can't deliver."


Still, having a criminal record doesn't normally cause an automatic denial; people are instructed to fill out a personal history statement about what happened, and Berkowitz said the key issue is whether an applicant is going to be truthful and honest about what happened.

"It's about the narrative — you've got to tell the story and the circumstances," he said. "But I've been involved with loans where convicted people were able to get the money."

With the PPP program, however, nobody gets a chance to explain themselves. The application asks business owners whether they or anyone owning 20% or more of the business are currently subject to "an indictment, criminal information, or arraignment," or incarcerated, on probation or on parole. 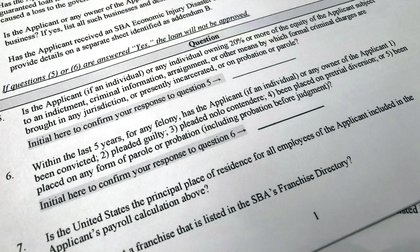 The application also requires applicants to confirm that they haven't had a felony conviction, guilty plea or related pretrial diversion program, or been placed on any form of parole or probation, in the past five years.

If the answer to either question is yes, the form states "the loan will not be approved."

An even broader criminal record question appears in the EIDL application. The form asks whether someone has "ever been convicted, pled guilty ... or been placed on any form of parole or probation," but it is unclear if answering yes is disqualifying.

Corey said he checked "yes" on that question and never heard back, but according to Carol Wilkerson, a spokesperson for the SBA, he should have been contacted for more information.

"If an applicant answers in the affirmative to questions in the EIDL application about prior convictions, SBA will seek to obtain more information from the applicant in order to make a character determination before approving the loan," she said in an email. 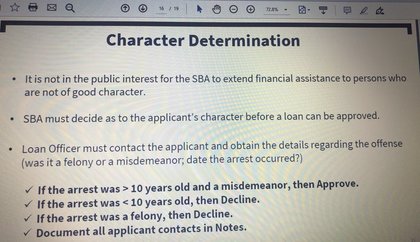 According to an anonymous Reddit user, SBA guidance instructs staff to automatically decline EIDL applicants who've ever been arrested for a felony. The SBA would not confirm or deny whether the guidance is legitimate.

On April 24, a Reddit user identified as "sbaleaky" posted images that purport to be EIDL guidance for SBA staff; one slide indicates that, if an applicant was arrested for a felony, they should be declined. If they were arrested at all within the past 10 years, the slide says, "then decline."

When asked, Wilkerson would not confirm or deny whether the posted images were legitimate SBA guidance. The Reddit user did not respond to repeated requests for comment, but Marc Levin, vice president of criminal justice at the Texas Public Policy Foundation and Right on Crime, told Law360 that, if accurate, the information is "disturbing."

"I don't know for sure the authenticity," he acknowledged. "But it looked like it was copy and pasted from a document and it's not something someone would make up, so I tend to think it's accurate."

The exclusions in both programs have drawn the ire of groups like the American Civil Liberties Union and the Justice Action Network. They joined 17 other organizations in objecting to the criminal record restrictions via an April 17 letter to Treasury Secretary Steven Mnuchin and SBA Administrator Jovita Carranza.


"The restrictions will have a particularly harsh effect on minority business owners and employees who are disproportionately affected by the criminal legal system as a result of institutional discrimination," the letter states.

I think it could definitely be challenged in court, but obviously we are trying to change it administratively or through legislation so it doesn't need to get that point. 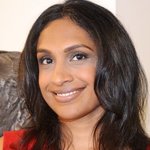 Inimai Chettiar, federal legislative and policy director for the Justice Action Network, said she thinks the restrictions could be cause for a lawsuit.

"The letter we signed explains that it's inconsistent with congressional intent, overbroad and racially discriminatory," she noted. "I think it could definitely be challenged in court, but obviously we are trying to change it administratively or through legislation so it doesn't need to get that point."

Mnuchin partially responded to the letter during an April 21 White House press briefing. Without addressing the controversy over the EIDL grants, he said the PPP loan restrictions were actually less onerous than previous limitations on loan eligibility. The alleged improvement, according to Mnuchin, could be attributed to coordination with Trump's son-in-law and senior adviser, Jared Kushner, who spearheaded the administration's landmark criminal justice reform bill last year.

"Because of the criminal reform legislation that was passed and the work that's been done in the White House by Jared and others, we specifically designed the program and the five years was significantly shorter than what had been done before," Mnuchin said. "There were a lot of people who wouldn't have access previously."

But according to Margaret Love, the former U.S. Pardon Attorney and an administrator of the Collateral Consequences Resource Center, Mnuchin's comments were inaccurate.

"I don't know what he is talking about," she noted. "The rule is not less onerous than preexisting SBA rules, it adds a category of disqualification. He may have simply been referring to existing SBA practice not to loan to people with a record."

Berkowitz said the SBA's decision to automatically disqualify PPP applicants with criminal involvement in the past five years is likely an attempt to speed up a process that could otherwise be slowed by offering the usual character assessment.

He noted that the SBA, which normally guarantees roughly 70,000 loans per year, has guaranteed more than 15 times that amount in less than a month.

"They don't have the time to do character assessments," he said. "The attitude was: How do we make things easy to deal with?"

Levin agreed that expediency was probably a motivating factor, but he wondered aloud why they didn't narrow the exclusion to only those with financial crimes on their records.

"Sure, if they have a fraud conviction, that implicates the public interest," Levin said. "But the vast majority of people with criminal records who go on to start a business, they had a drug conviction or something else unrelated."

On April 30, Sens. Rob Portman, R-Ohio, and Benjamin L. Cardin, D-Md., wrote a letter urging Mnuchin and Carranza to revise the PPP's exclusion for those with criminal involvement in the past five years. They said millions of business owners — and their employees, many of whom also have criminal records — were being blocked from "much-needed emergency relief."

"This relief was not intended to exclude business owners who have made mistakes, paid their debt, and turned their lives around," they wrote.

Despite all the controversy, some people with criminal records have managed to get a PPP or EIDL loan. Scott Jennings, the owner of a fitness equipment installation and repair company that operates in North and South Carolina, served 35 months for a felony drug charge and has been out of prison for 10 years.

His company, FitTech and Assembly, was able to access government relief, but he described the broad criminal record questions as a form of discrimination.

"It is unfair for the loan to discriminate against those who have had any convictions in the last five years," he said. "Because of one mistake ... families suffer. This has a butterfly effect."

For Corey, who has been out of prison for eight years but did not receive loan assistance, the butterfly effect has already begun.

"I'm trying to keep my right hand guy here, but my business account is overdrawn and I owe some creditors," he said. "Sometimes I drink the Kool-Aid, that the government is there to help ... but after awhile, I just throw up my arms. It's a constant loop of frustration."