Ronal Serpas On Why Police Reform Is A Justice Issue 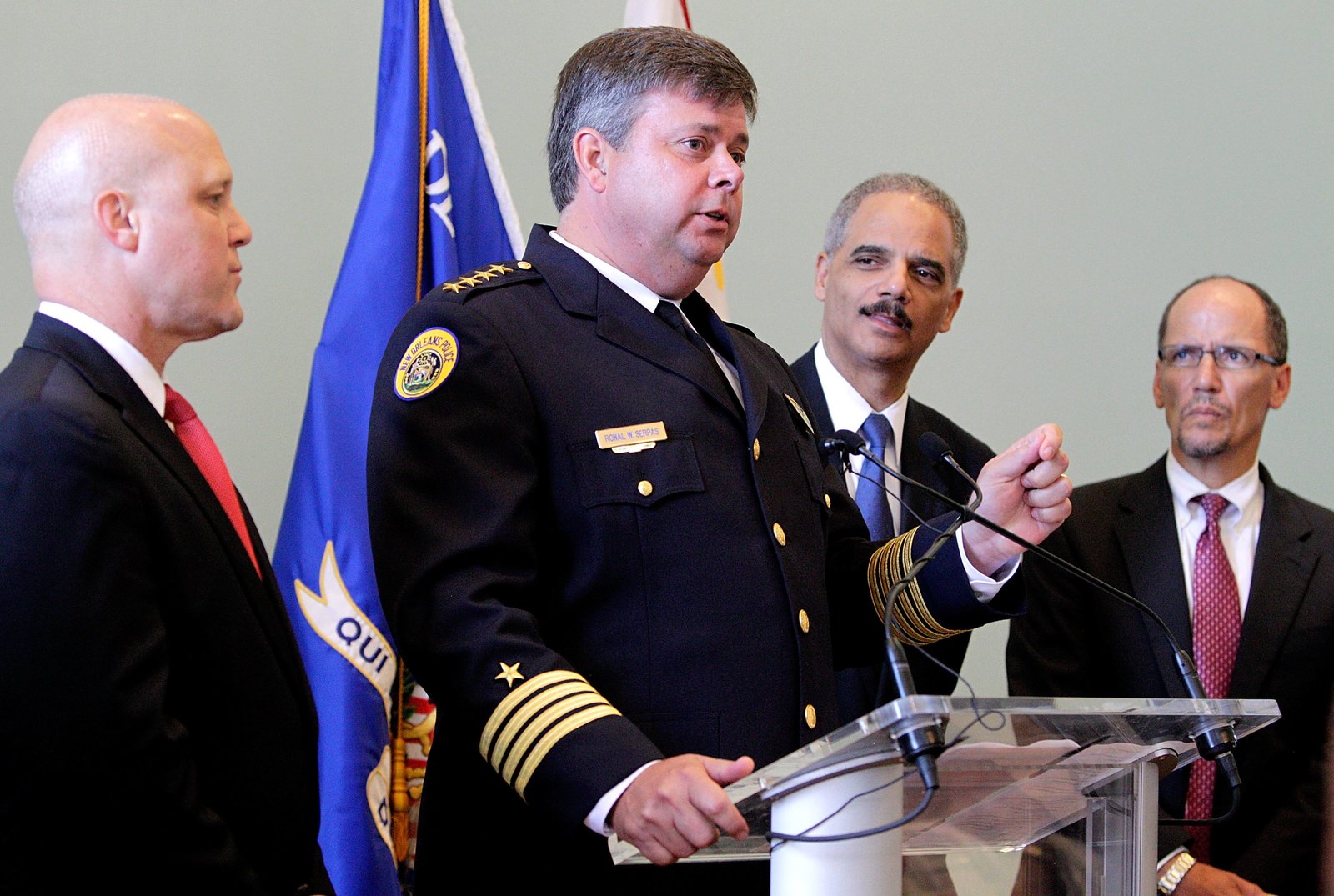 Ronal Serpas, pictured here while serving as superintendent of the New Orleans Police Department, now serves as co-chair of Law Enforcement Leaders to Reduce Crime & Incarceration, a group of current and former police and prosecutors in favor of criminal justice reform.(Sean Gardner/Getty Images)


Ronal Serpas ended his 34-year law enforcement career to teach at Loyola University in 2014, but he hasn't given up on police reform.

A year after retiring from the New Orleans Police Department, he was named co-chair of Law Enforcement Leaders to Reduce Crime & Incarceration. The group uses its criminal justice clout to advocate for reform.

"Our essential purpose is to use the voice of people who are experienced in the frontlines of this 30-year decline in crime to highlight that we don't have to continue to use arrests the way we once did, and here are some alternatives we should consider," he told Law360.

Most recently, Serpas submitted written testimony to the president's Commission on Law Enforcement and the Administration of Justice. Many of his recommendations — including establishing a national database of officers who've been fired for misconduct, and diverting people with mental illness and drug addiction from the criminal justice system — were incorporated into President Donald Trump's executive order on police reform.

He instituted broad and sometimes contentious changes at those departments, and was a proponent of the controversial CompStat system of data-based policing, and more community-based accountability measures.

Here, Serpas talks about why police reform is an access to justice issue.

What led you to do this kind of work?

A lot of police chiefs, prosecutors and some correction officials, current and retired, were our original group. And we came together around the idea that you can decrease crime and incarceration at the same time. We started advocating on the federal level during the early days of the reform efforts on sentencing following the crack sentencing reform of 2010.

And our message was pretty straightforward: That if we provided police officers more alternatives to arrest around drug, alcohol and mental health, they would use them. And that statutes with significant punishments from long ago needed to be looked at again, that community policing makes a lot of sense and needs to continue to be supported, and that mandatory minimums in effect removed from the decision process the most important person with the most information — the judge.

Just recently, we gave written testimony to the law enforcement commission of President Trump and the DOJ, and we continue to advocate with different states as they go through the process of considering rational and reasonable alternatives to sentencing and incarceration.

What did you see in your years on the job that made you want to focus on decarceration?

I led a CompStat meeting from October 1996 until August of 2014 every Friday. Myself and my colleagues, we began to see that the process of arresting many of these low-level crimes that made communities sometimes feel better about things in fact was destroying our ability to continue to make relationships into many communities that have the information you need to solve crime.

Probably around 2006, we began the process of conducting sophisticated surveying of the communities to determine the quality of our service. We used that as a way of holding our commanders accountable for things that were much bigger than just the number of traffic stops and arrests.

It became really clear that using alternatives to arrest was valuable, that it allowed for the community to feel people were still being held accountable for a criminal act; however they weren't being put into the criminal justice system in a way where they were incarcerated and were unable to get bail or bond.

Because by and large, many people were literally serving a life sentence three days at a time. They would get arrested for trespassing, public defecation, something that disturbed the neighborhood or business. They would go to jail and either sober up or get some level of mental health or medical care, get out of jail three days later, and within another three days, collapse into the same routine.

Myself and a lot of the other major city chiefs were looking for new ways to measure police productivity that did not rely only on arrests, and in fact started advocating against arrest policies.

What are some alternative measures you used to hold police accountable?

In Nashville, we instituted some new policies. The first one was, if you are untruthful on any matter, you will be terminated on the first offense, not a graduated offense. If you wrote a false or inaccurate report, you would be terminated on first offense. And most importantly, if you were witness to a police officer's misconduct and didn't report it to a supervisor, you yourself would be held equally as responsible.

Now what that does, it provides space in the culture for police officers to say things, and then if they needed to, they could blame it on the rule. "Look man, I didn't mean to tell on you. But you know, if they'd have found out I knew and didn't tell, they'd have fired me."

We were tested with a case involving an officer who essentially lied about being late to work. I terminated him under that rule. You can imagine the labor organizations became apocalyptic, and people in the community didn't understand it.

We took it to the appellate court in Tennessee, and we prevailed. The testimony of myself and others was simply this: If a police officer is willing to lie about being late, and they know the worst that could happen is a letter of reprimand, what else could they lie about? "Did I find those drugs where I said I found it?"

The efficient, effective service of policing relies on a police officer's truthfulness. They can walk into a court of law, civil or criminal, and say, "As a police officer, an officer of the court, this is what I did." And the [state] Supreme Court denied that appeal, which made that the law in Tennessee.

If a police officer can't tell the truth, they're of no value to policing.

How is policing and the work you do an access to justice issue?

One of our core principles in LEL is alternatives to arrest for narcotics. The use of the criminal justice system for those problems is the least likely to be successful and yet it's the one we use the most.

How does that manifest? Aggressive panhandling, sleeping in people's doorways, trespassing. When you're mentally ill or drug addicted, you generally don't keep employment, and so people get into this incredible circle of getting out, getting back in, building up fines and fees and bail bonds, and they never get out.

You've got to find ways to incentivize the governments to create alternatives. We know that in Tucson and Miami Dade County and Seattle that when you give police officers alternatives to arrest, they're going to use it, which puts people out of the justice system.

What do you think of current calls to defund police departments?

If there is a consideration that creates better funding and responsiveness for mental health and addiction, that is a great thing. I think you could get some support around that. As many as 25% of the people involved in fatal exchanges with police officers had been [identified as needing] mental health services.

If defunding police is just meant to be a punitive action as a reaction to not thinking change has occurred, that's probably not going to be successful, because while we can hope that police will no longer be government's designated first responder to many of these for mental health and drug and alcohol issues, the government will always expect the police to be the first responders for murder, rape, domestic violence, child sex abuse.

The notion of reducing police and not recognizing all that is still going on is not likely to be very successful.