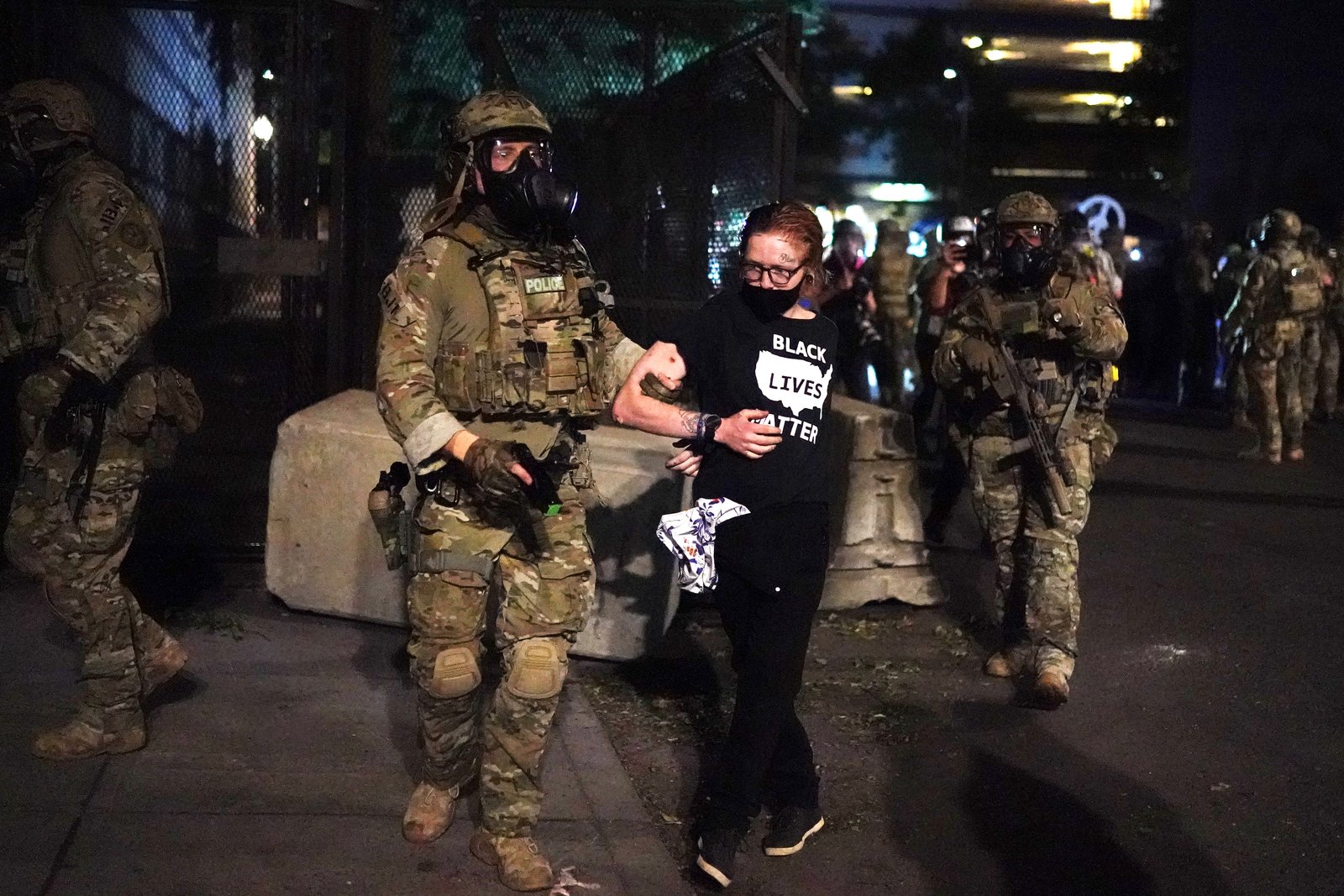 Federal officers arrest a protester after dispersing a crowd of a few hundred people from in front of the Mark O. Hatfield U.S. Courthouse in the early hours of July 30 in Portland, Oregon. (Photo by Nathan Howard/Getty Images)


The U.S. Department of Homeland Security and Oregon Gov. Kate Brown announced the drawdown of federal agents from Portland on Wednesday, but their presence could be felt long after they depart, as their conduct has spurred lawsuits over civil liberties and free speech violations, a U.S. Department of Justice review and newly proposed federal legislation.


Portland has seen nightly protests since George Floyd, a 46-year-old Black man killed by Minneapolis police officers in May, became a rallying cry of a nationwide anti-racism movement.

Those protests had mostly been peaceful, but there have been incidents of property damage, including a Molotov cocktail that was thrown at U.S. Immigration and Customs Enforcement's Portland field office and an estimated $50,000 in damages to the federal courthouse downtown.

After federal agents deployed to Portland in early July, the protests escalated, with regular violent clashes between law enforcement and protesters. The federal courthouse has sustained an estimated $50,000 in damages, according to court filings.

In the executive order that spurred the deployment, the president name-checked "anarchists and left-wing extremists," raising First Amendment questions about which protests draw federal intervention. The number of arrests that didn't result in a charge suggest agents failed to establish probable cause when picking up protesters. And the fact agents ventured blocks from the courthouse they were sent to protect could suggest they pushed the limits of their mission to make arrests.

Their actions could have lasting effects for the 49 protesters charged in federal court, whose cases were reviewed by Law360. And their deployment could stretch the bounds of what's considered normal for federal law enforcement, according to Rachel VanLandingham, a retired Air Force lieutenant colonel and a law professor at Southwestern Law School. That concern is heightened as DHS plans to send more agents to other states.

"Is this a blip that's over? I doubt it," she said. "There still should be repercussions regarding violations of constitutional rights. I think there's greater damage done, and that's the damage done to norms."

Those have drawn criticism from political leaders, including the president.

"There has been a sustained assault on the life and property of civilians, law enforcement officers, government property, and revered American monuments," he wrote in an executive order signed in June. "Many of the rioters, arsonists, and left-wing extremists who have carried out and supported these acts have explicitly identified themselves with ideologies — such as Marxism — that call for the destruction of the United States system of government."

The legal basis for that executive order, which resulted in the deployment of about 100 federal agents to Portland in July, is the Homeland Security Act of 2002. It created the federal agency, and included among its powers "protect[ing] the buildings, grounds, and property that are owned, occupied, or secured by the federal government."

That law, passed in the wake of 9/11, was originally aimed at terrorist attacks on domestic soil. Using that statute to protect a courthouse from protesters is "really odd" and unprecedented, according to South Texas College of Law professor Geoffrey Corn, a national security law expert who served as a U.S. Army lieutenant colonel. While the statutory authority is there, he said, the details of its application are unclear.

"I doubt there's any type of written guidance, because I seriously doubt there's been a lot of attention to this issue up until now," he said. "The planning was probably more focused on protecting vital resources like a nuclear facility against a domestic terrorist attack."

That made it difficult to define what exactly federal agents could do in Portland, according to Aziz Huq, a constitutional law professor at the University of Chicago. When agents ventured blocks from the courthouse they came to protect, the scope of their mission became even murkier.

"If the officers are doing something that looks more like general crowd control, I think that becomes legally problematic," he said. "Some of the reports suggest that the Portland deployment has gone a few blocks beyond where the federal buildings are. I do think there's this question as to whether the parameters of the mission fit within the statute's metes and bounds."

Federal agents have strayed more than a block from the courthouse grounds at least six times to make arrests, five of which occurred in the early morning hours during the July protests, according to a Law360 review of the 49 criminal complaints mentioned in the U.S. attorney's press releases through July 30. Eight complaints made no mention of where the arrests took place.


DHS did not respond to requests for comment, but in press releases the agency has said federal statutes give its agents the authority "to arrest criminals who damage federal property or attack federal officers."

But Corn questioned whether that would hold up in court if a protester were to bring a civil suit claiming a DHS arrest violated the Fourth Amendment because it occurred too far from federal property.

"The district court judge would have to decide the way you always decide a Fourth Amendment question: Was the tactical execution reasonable?" he said. "I would think they have to stay relatively proximate to the courthouse. Otherwise, they're creating the perception that they're essentially acting as state agents."

Damage to the courthouse was the focus of five of the 49 cases against protesters announced in DOJ press releases. They included charges like arson and destruction of federal government property.

Two other criminal charges dominated the protest docket. Fifteen people were charged with failing to obey a lawful order. Another 26 cases involved assaulting a federal officer. The nature of those alleged attacks ranged from striking a U.S. marshal with a hammer to aiming a laser pointer at agents.

Each day, the Oregon U.S. attorney's office announced the criminal charges it filed in Portland using the same time frame that DHS did for its arrest numbers — according to when the alleged offense occurred, with 24-hour periods that begin in the evening and include the early morning of the following day.

Yet their numbers rarely line up, according to a Law360 review of a week of protests. 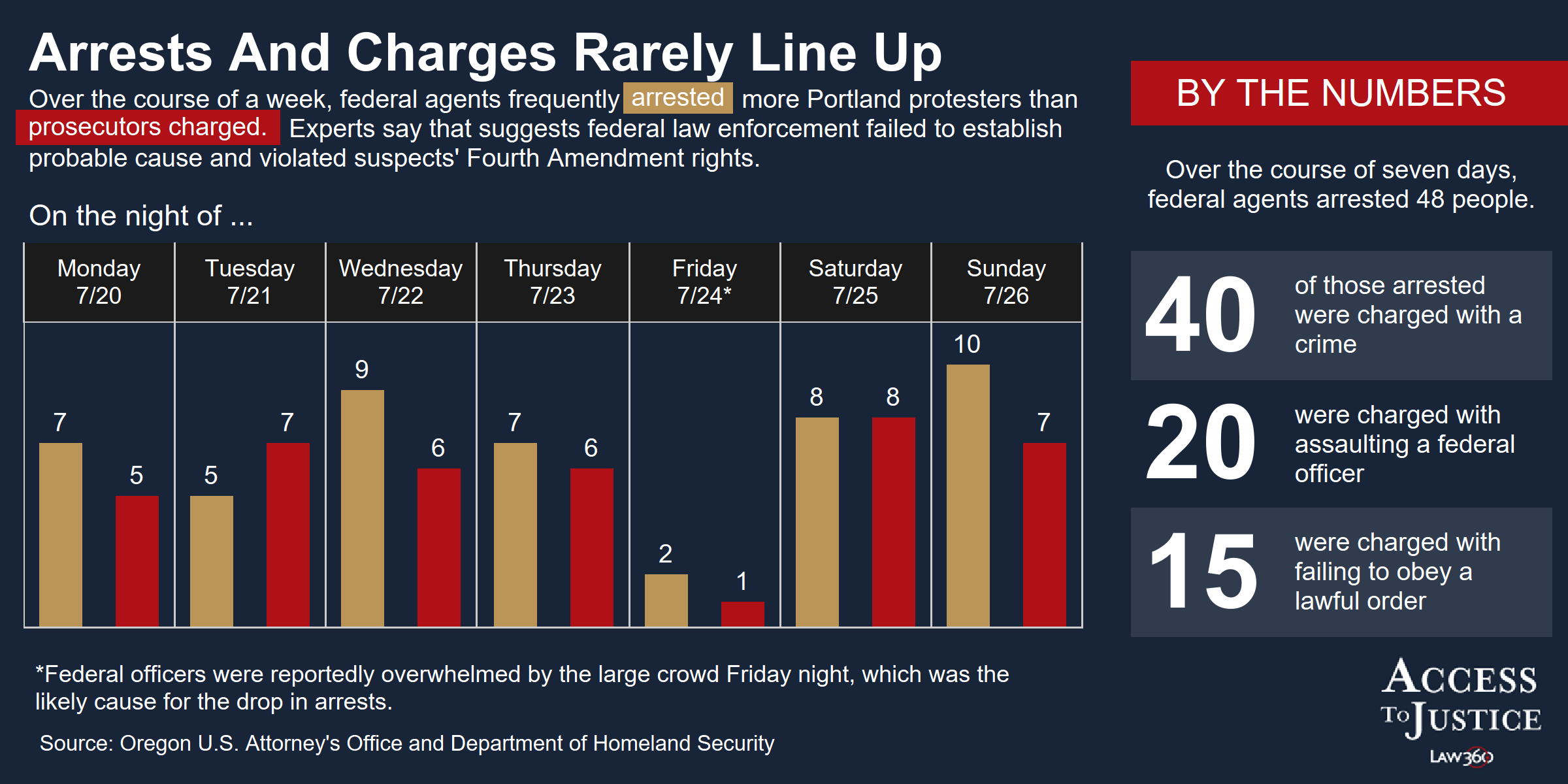 Corn said the fact suspects were arrested and released without a court hearing suggests federal agents "may have realized they really didn't have adequate legal authority to make those arrests." While police can temporarily seize someone to do an on-scene investigation, cuffing and moving them to a different location is an arrest that requires probable cause.

"The police don't have the privilege to scoop people up and bring them into the station to figure out who should be arrested," he said.

Federal agents also haven't always identified themselves when detaining suspects, according to a civil lawsuit filed by Oregon Attorney General Ellen Rosenblum's office, which alleged one Portland resident was leaving a protest when he was grabbed by men in camouflage and put in an unmarked van. He was not told why he was arrested, and didn't even know what law enforcement agency had arrested him, according to court documents.

Such incidents rob citizens of the ability to determine whether they're being arrested and have to comply with officers, or if they're being kidnapped and have a right to resist, Rosenblum argued.

DHS has called the allegation a "myth," saying in a press release that "law enforcement officers in Portland and cities across American wear uniforms that clearly identify themselves as 'Police,'" but the alleged incident prompted U.S. Rep. Alexandria Ocasio-Cortez, D-N.Y., to file a bill that would require federal law enforcement to display identification.

Currently there is no legal right to know your arrester, but Corn said "it's just good tactical practice" for officers to identify themselves.

But he added that the practices seen in Portland could be a symptom of DHS bringing in federal agents who don't normally do this kind of work. Some affidavits attached to criminal complaints against protesters were written by agents who normally track down sex offenders and fugitives.

According to DHS internal memos leaked to The New York Times earlier this month, officers deployed to Portland "do not specifically have training in riot control or mass demonstrations." The memo recommended specialized training "moving forward, if this type of response is going to be the norm."

"This is the danger of using forces who are not particularly prepared and trained for this type of environment," Corn said.

On top of the Fourth Amendment concerns raised by these probable cause questions, experts worry about the threat to the free speech rights of protesters.

For VanLandingham, that concern stems from the language in Trump's executive order. Setting law enforcement priorities is appropriate for a president to do, she said, "but he did so by focusing on certain ideas," like Marxism, anarchism and left-wing extremism.

Huq worries the executive order language could compel law enforcement to target protesters because of the signs they're holding or perceptions of their political beliefs.

"You can imagine the situation in which there are protesters from both the left and right and both groups are committing acts that are amenable to criminal charges, but only one side is being charged," he said.

The Justice Department's inspector general has opened an investigation into whether federal agents' use of force in Portland has been excessive, and is also reviewing their training, compliance with rules of engagement policies and their use of less lethal munitions. One protester required surgery after he was shot in the head with those less lethal munitions in mid-July.

Now, as those agents are leaving Portland, DHS is channeling law enforcement into other cities.

Officials have drawn a distinction between Portland, where federal agents were sent to protect public property from protesters, and deployments in Kansas City and Chicago, which are part of Operation LeGend, an effort to bolster local law enforcement.

Corn said it's not unusual for FBI agents to help with crime lab work and interrogations for violent crime investigations, and the agents could aid cities reeling from gun violence. But Portland has made some cities wary of federal intervention.

"Instead it's received, I think justifiably, with tremendous suspicion and trepidation," he said. "That's what's so sad about Portland."