As a little girl, Celina Stewart used to join her mother, Mabel, at the polls on voting day.


Mabel had been one of six Black students to initially integrate an all-white middle school, and she always reminded her daughter that it was important to make your voice heard. 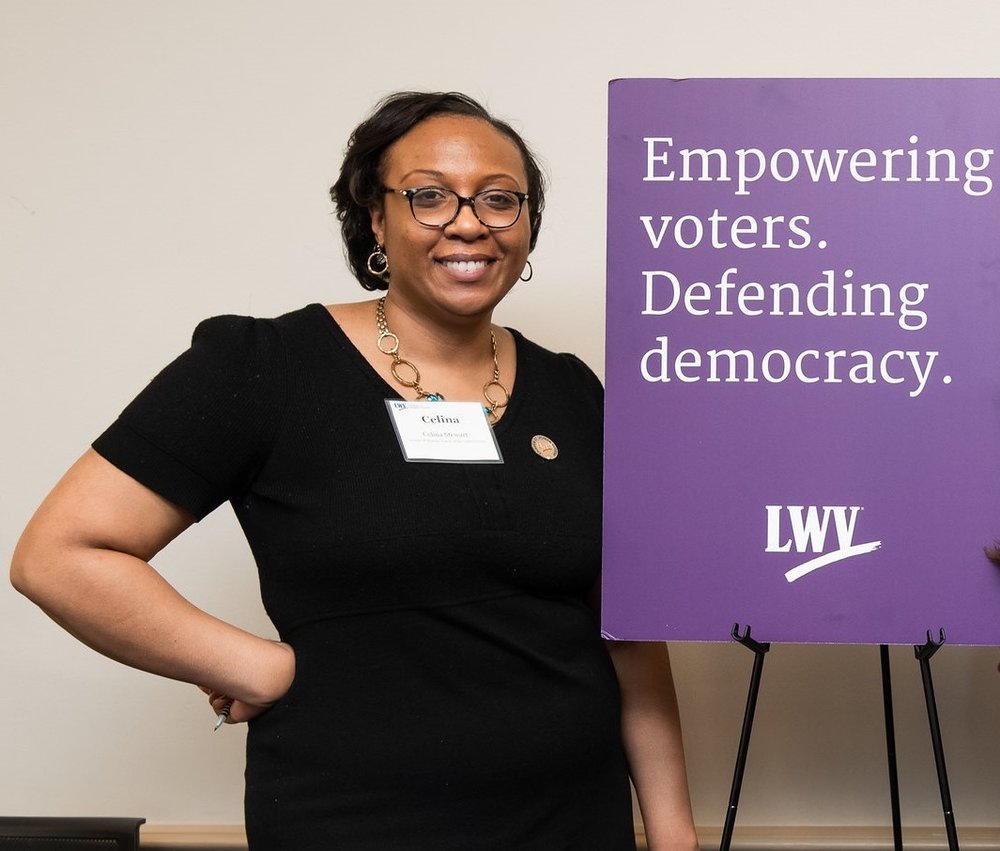 Celina Stewart is the senior director of advocacy and litigation for the League of Women Voters.

"Voting was a big activity in my house," Stewart, who is now the League of Women Voters' senior director of advocacy and litigation, told Law360 in a recent interview. "My mom stressed the fact that these things did not come easy for people who look like us. It's been a fight."

Her early memories of ducking under the poll curtains and watching her parents maneuver election machines made an impact; Stewart has since dedicated her career to electoral reform. Before joining the League of Women Voters, she worked as the chief operating officer of FairVote, a voting rights organization. She also spent time as a redistricting attorney for then-Georgia House Representative Stacey Abrams.

At the League, Stewart oversees a national litigation portfolio that has tripled in size during the pandemic.

Here, Stewart speaks with Law360 about the intersection of access to justice and this year's election.

What are the key policy concerns for the LWV going into November?

We actually have not advocated for universal vote by mail because there are civil rights concerns with preserving in-person voting, especially for people with disabilities. But there is an uptick in valid vote-by-mail requests. We want to make sure that, as state election officials contemplate poll consolidation, you're also making alternative options like ballot drop boxes — which are secure and have 24-hour surveillance with a poll worker during Election Day. That has been, as we saw in primaries, a very safe way for people to execute their ballot and avoid long lines.

All of those policies need to be taken into consideration, and I think the last key policy I would mention is restoring the Voting Rights Act. The 2013 Shelby County v. Holder

decision had serious repercussions; following that decision, we had 34 states implement strict voter ID laws. That is an indication that the guardrails have been taken off in a bad way. This will be the first time in a long time, almost six decades, that we haven't had voting rights protections during a redistricting cycle.

How can obstacles to voting affect one's access to justice?

Take voter purges. We all want clean rolls, I think that that's very important to the League and many other voting rights organizations like ourselves, but there are rules for doing it responsibly and legally. We've seen that a lot of purges are done irresponsibly, illegally and without data, and that abridges the right to vote — limiting people's access to justice.

There's also delayed ballots in the mail, when people request them and don't get them. That's infringement of the First Amendment right to associate with a political party.

And I also think, poll consolidation is not done evenhandedly. We know there is an increase of poll closures and consolidation in urban areas and Black and brown communities with no notice. Notice is a key part of the 14th Amendment, having due process. We saw in Milwaukee earlier this year hundreds of thousands of voters having five polling places where, in other parts of the state, there were 10 or 15 polling places. What is the difference? The difference is the demographic in that area.

What can lawyers do over the next three months to make sure everyone can access justice via the ballot box?

One key step is volunteering for election protection to support voters who need legal support on the ground. It's a national initiative and this year it's larger than ever; there are grassroots satellite offices in, I think, every state at this point. That's an easy way to plug in.

You can also volunteer as a poll worker or poll observer. I've done that for several cycles; you go up to officials with them and say, "Hey, this voter actually is valid," or you help them file a provisional ballot and come back with whatever information they need.

The other thing is, there's a lot of large resource firms. If they are willing to be a resource for organizations like the League, they can help fight against threats to democracy leading up to the election, and immediately after, depending on how things go.

On a personal level, it's important for all of us to encourage our family and friends to get registered, learn about the candidates, and vote. Visit Vote411.org.

Why are policies like voter ID laws and ballot witnesses repressive?

These laws are particularly problematic because they deprive voters the right to vote and reduce participation, something in direct opposition to our country's values. Many Americans who are disproportionately low-income and racial or ethnic minorities don't have the forms of identification that states want people to now show. For example, Texas now allows concealed weapon permits as IDs but not student ID cards, even though they have some of the largest universities in the country.

If we want ID, fine. The League hasn't pushed for that because we didn't need it for decades. But if we are going to require it, it needs to be representative of the IDs that people actually have.

As for ballot witnesses, especially during the pandemic, it's problematic. So many businesses are still closed or reduced hours and the uptick in requests causes a strain on not only notaries, but also people with compromised immune systems or who live with someone with a compromised immune system. It makes them vulnerable to have to go out and get a signature and, oftentimes, it's two signatures they need.

It's all unnecessary — there's already plenty of security measures in place for the absentee process; ballot tracking on it, you can trace the custody; you also have to sign it, and your signature is on file; you also can give your address and ZIP code to show that it's yours.

What about voter fraud?

The League of Women Voters is a very process-oriented group. We lean on practice and data and we research the hell out of stuff. We are evidence-based, and when you look at these obnoxious claims about fraud, the actual rate is 0.00067. That is a very low fraud rate. A couple thousand incidents among millions and millions of people who vote.

When we put it in real numbers like that, are we chasing a problem that does not exist?