Flowers Case Shows How AGs Are Stepping Into The Spotlight 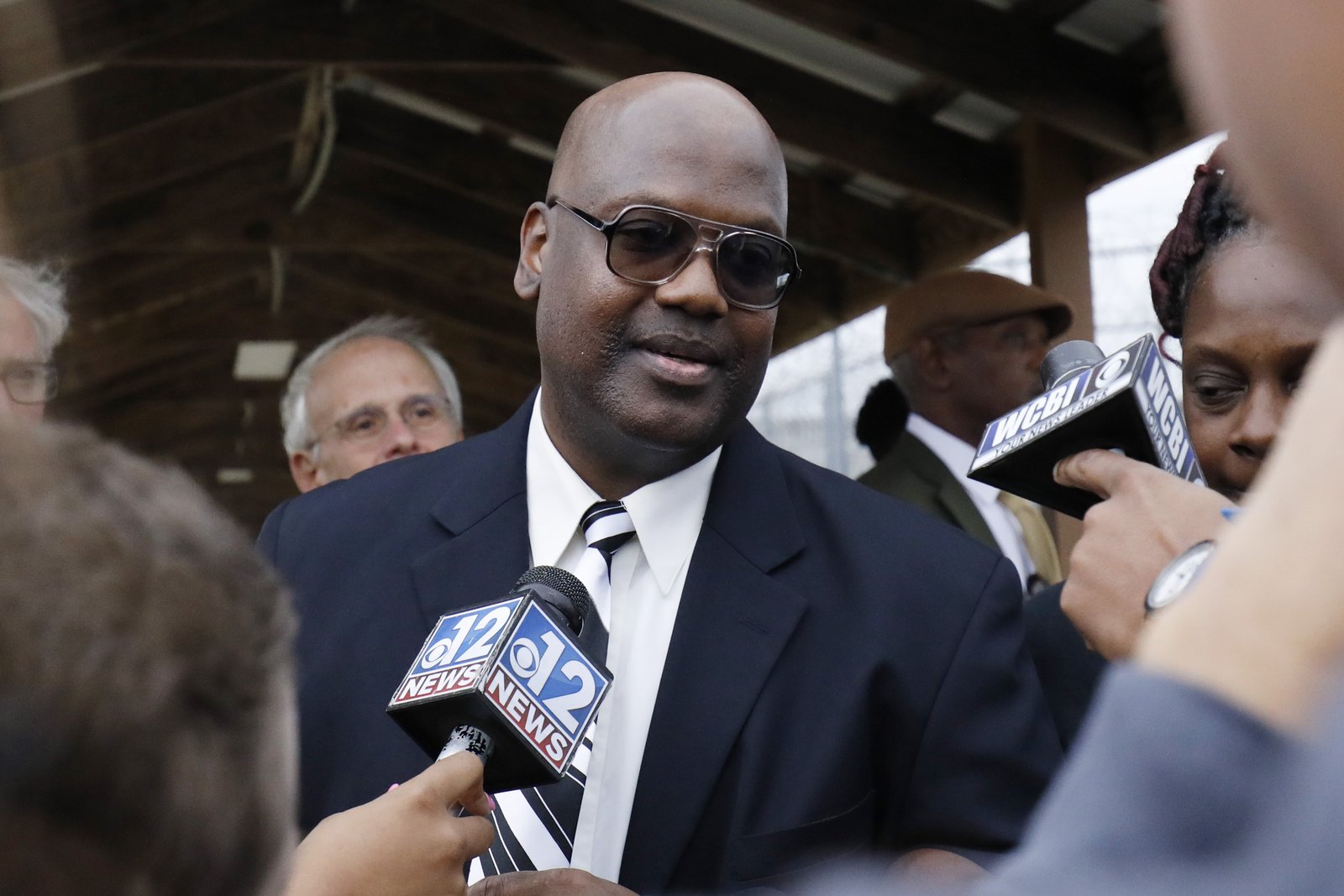 Curtis Flowers spoke to reporters outside the Winston-Choctaw County Regional Correctional Facility in January, after being released on bail following 23 years in prison. Flowers was tried six times for the same crime by the same prosecutor. Then, Mississippi's attorney general took over the case. She dropped the murder charges against him within six months. (AP Photo/Rogelio V. Solis, File)


After four people were murdered in a rural Mississippi furniture store in 1996, Curtis Flowers stood in the crosshairs of local district attorney Doug Evans for decades.

Then, the case was handed over to the state's attorney general, and the charges against Flowers were recently dropped.

Evans had taken Flowers to trial six times for the killings. Each proceeding ended in either a mistrial or a successful appeal. The latest conviction was overturned by the U.S. Supreme Court, with Justice Brett Kavanaugh finding Evans engaged in a "relentless, determined effort to rid the jury of black individuals." After that, attorneys for Flowers — who is Black — sought to get the prosecutor dismissed from the case.

Evans recused himself instead, saying in January he worried his "continued involvement will prevent the families from obtaining justice and from the defendant being held responsible for his actions." He asked Mississippi Attorney General Lynn Fitch, a recently elected Republican, to lead a potential seventh trial.

But Fitch's office filed a motion to dismiss the case against Flowers, writing that after thoroughly reviewing the record, "there is no key prosecution witness that incriminates Mr. Flowers who is alive and available and has not had multiple conflicting statements on the record."

"It is in the interest of justice that the state will not seek an unprecedented seventh trial," the motion said.

It was the latest example of an attorney general swooping into the spotlight and taking on the role of independent prosecutor in a case so laden with racism and publicity that it was perhaps too big of a lift for the local prosecutor.

In May, video footage captured the death of George Floyd — a Black man who begged for his life as a Minneapolis police officer pushed his knee into his neck — sparked national protests over racism in the criminal justice system.

The prosecution of the four officers involved in Floyd's death was originally led by local District Attorney Mike Freeman. He he didn't indict the three officers who stood by while Floyd died, and charged Derek Chauvin, the officer who killed Floyd, with the lesser crimes of second-degree manslaughter and third-degree murder. Minnesota Gov. Tim Walz then turned the case over to Attorney General Keith Ellison, who charged all four men, and added second-degree murder to the charges against Chauvin.

But the conversation about jurisdiction over such cases didn't end there.

At the federal level, the George Floyd Justice in Policing Act, which passed in Congress and stalled out in the Senate, would have created a grant program for state attorneys general who investigate problematic police departments.

"America has a serious and deadly problem when it comes to the discriminatory and excessive policing of communities of color — and that policing exists within a system that time and again refuses to hold police accountable for their brutality," Sen. Cory Booker, D-N.J., one of the bill's authors, said when it was unveiled in June. "We are forced to figure out how to keep ourselves safe from law enforcement and we are viewed as a threat to be protected against instead of people worth protecting."

Most state constitutions have long granted attorneys general the power to take over criminal prosecutions. But that power has been cast into the spotlight in recent months, as more prosecutions — especially charges against police officers accused of using excessive force on Black suspects — have drawn national scrutiny. Those high-profile cases are often turned over to the state's top lawyer.

"It is an increasing trend because of the increase in transparency on police misconduct, which is increasing public cynicism," according to James Tierney, a lecturer and director of the attorney general clinic at Harvard who served for 10 years as Maine's attorney general starting in 1981.

But when an attorney general's office takes over a case, it doesn't necessarily reflect poorly on the local prosecutor, he said. Police officers often serve as witnesses in district attorneys' cases. Attorneys general don't need to maintain close working relationships with police officers, and, as a result, may seem more impartial, according to Tierney.

"This isn't about being a good district attorney or a bad one," he said. "[A referral] lets us have someone else who has a little distance look at this."

Attorneys general frequently help cover criminal prosecutions, especially in small, rural counties with limited resources and a higher likelihood of conflict of interest, according to Tierney, who said, "there's nothing new about this relationship."

But when Ashley Taylor served as a deputy attorney general for Virginia from 1998 to 2001, prosecutions accounted for little of the office's case load.

"When I was in the office, and I don't think my experience was unusual, maybe 5% of criminal cases required the Attorney General's Office's attention. Most were handled by local prosecutors," said Taylor, who is now a partner at Troutman Pepper and chair of the American Bar Association's Subcommittee on State Attorneys General.

That's changed in recent years, according to Stanford law professor David Sklansky, both because of the greater attention paid to the use of excessive force by police, and because the federal government used to intervene when local investigations weren't enough.

But U.S. Department of Justice-led consent decrees with problematic police departments were effectively halted by a memo penned in 2018 by then-U.S. Attorney General Jeff Sessions.

"Since 2016 and the election of Donald Trump, the federal government has largely abandoned the job of safeguarding constitutional rights when they are threatened by local law enforcement officials," Sklansky said.

As a result, he said, in some states, attorneys general are stepping in to fulfill that role, both as a policy matter and in the courthouse.

The choice to step in may also reflect changes in who is running for attorney general, Taylor says. The office used to be a role attorneys took on toward the end of their careers, he said. Now, it's viewed as a stepping stone for people with political aspirations.

"People attracted to the office are people that are, at some level, politicians," he said. "I don't say that in a pejorative sense. It's just attracting a different type of lawyer. The calculation is different."

Historically, attorneys general were happy to leave prosecution to local authorities, says Sklansky, especially because "from a political standpoint, there wasn't a lot of upside and there was a lot of downside to a state attorney general taking on a controversial prosecution."

But public opinion has shifted the calculus.

"Black Lives Matter as a national movement has been largely responsible for bringing greater attention to the problem of police violence," he said. "Activists have done much to focus attention on the role the local prosecutor plays."

Public support for racial justice protests has slipped since it hit a peak right after Floyd's death in late May, but a recent Ipsos poll found 58% of Americans still supported the Black Lives Matter movement, while 34% opposed it.

Taylor says attorneys general are taking notice, and their willingness to take on such cases "reflects the impact of what we've all been witnessing."

"You see [Minnesota Attorney General] Keith Ellison using the office in a very different way than his predecessor, Lori Swanson," he said. "There's tremendous flexibility in an attorney general's office. You have the discretion to take cases."

"I didn't have that when I was in the office 20 years ago," he said. "When you bring different people in as office holders, you get different perspectives."

But Tierney insists that while there may be an uptick in attorneys general getting involved in police-involved prosecutions, "it's been this way forever."

Even if more states are legislating for attorneys general to take over criminal investigations, he said, in most states, they've been quietly working to ensure fair prosecution, especially in police misconduct cases, for decades.

"In Maine, it's just assumed that the AG will do that. It's not even a discussion," he said. "I did a grand jury on every police shooting. AGs are, I think, in a pretty professional place to deal with these difficult issues. They're very hard cases. I lost them all."

In the case of Curtis Flowers, he said, it may be that Evans asked the attorney general to take up the case because he didn't want to be the one to drop it.

And while taking someone to trial six times is unusual, he said, asking an attorney general to be the one to drop a case is not.

"Sometimes it's easier to come from Jackson, Mississippi, than from the county seat," he said.

Clarification: This story has been updated to better reflect Tierney's position at Harvard.