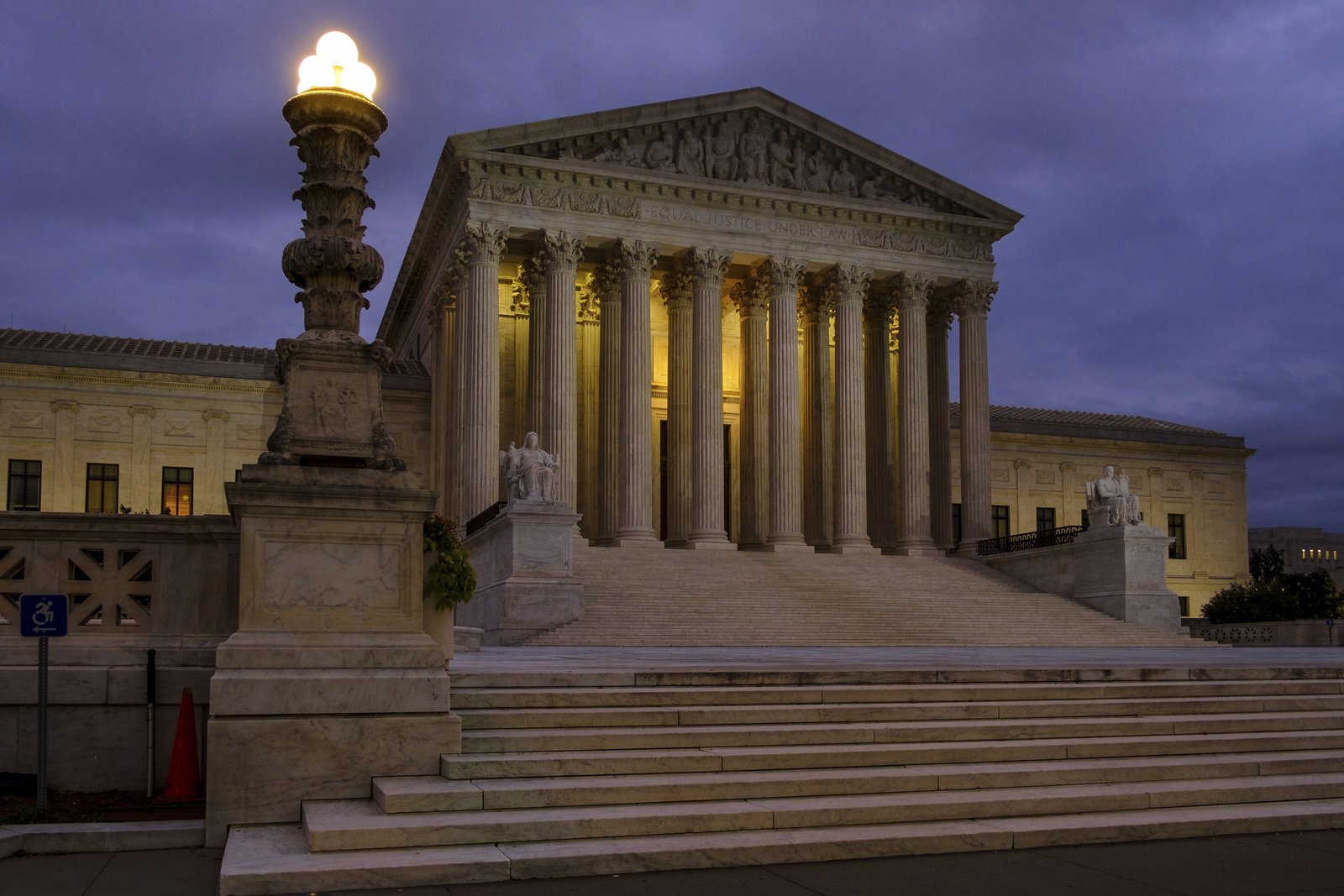 The U.S. Supreme Court, which is due to begin hearing oral arguments on Oct. 5, has numerous civil rights cases lined up already this term. (AP Photo/J. David Ake)


As the new term for the U.S. Supreme Court arrives, the justices are scheduled to hear numerous cases that could affect Americans' civil rights, ranging from immigration cases to sentencing disputes. They involve constitutional protections such as religious freedom, protections against unreasonable search and seizure, and interpretations of federal law.

"I'm always excited at the beginning of the Supreme Court [term]," said Anya Bidwell, an attorney with the nonprofit libertarian legal group the Institute for Justice, noting the group is optimistic about several upcoming arguments as the "cases are very much cross-ideological arguments that should appeal to all of the justices on the bench."

Here, Law360 has compiled a list of the top cases scheduled for oral arguments this term that civil and criminal rights observers have marked on their calendars.

A case out of New Mexico could establish limits when it comes to protection against unreasonable seizure by law enforcement.

In 2014, Roxane Torres was in her car in a dark parking lot when several plainclothes police officers in the process of arresting someone else attempted to open her car door, and she mistook them for carjackers. While she tried to drive away, the officers shot at her car, striking her twice in the back, causing serious injuries that would later require her to be airlifted to a larger hospital.

When she attempted to sue, however, the courts held that the officers' actions didn't violate the Fourth Amendment prohibition against unreasonable seizure because Torres was able to get away — meaning she was not "seized" at all.

The case has drawn attention from a variety of law professors, the NAACP Legal Defense Fund, the Constitutional Accountability Center, the Cato Institute, and others. The U.S. solicitor general has also asked to participate in oral arguments, saying that the lower courts "erred" in their interpretation of the Fourth Amendment in the case.

Clark Neily of the Cato Institute told Law360 that he's hopeful the high court will reject the lower courts' interpretation.

"It's difficult to square with existing case law," he said, saying that it would be a surprising departure if the justices said that the Fourth Amendment didn't apply.

Advocates have argued that if the lower courts' decision is upheld, however, it will make it harder to hold officers accountable for bad behavior.

Bidwell echoed this idea, noting that the government's goal appears to be to make it more difficult to sue law enforcement officers. The case also could have implications for how the Fourth Amendment is interpreted more generally, she added.

"The Fourth Amendment is an extremely important constitutional provision," she said. "It's very interesting to see how the courts go about interpreting this."

A year after the high court issued a landmark ruling in Ramos v. Louisiana

declaring that nonunanimous jury verdicts are unconstitutional, it has this year agreed to consider whether that ruling should be applied retroactively.

The case, Edwards v. Vannoy, has the potential to affect a large number of people in Louisiana and Oregon, the only two states that have allowed nonunanimous convictions in recent years. Critics of the policy — and the Supreme Court in Ramos v. Louisiana — have noted that the policies were put on the books in an effort to undermine the power of jurors of color in criminal cases.

In the suit before the court, Thedrick Edwards was convicted of several abductions, robberies and rapes that happened near Louisiana State University by suspects identified as Black men with bandanas over their faces. At trial, prosecutors struck 10 of 11 prospective Black jurors, using only one preemptive challenge on a non-Black juror.

The only Black juror on the jury voted to acquit on all charges, but Edwards was still convicted on a 10-2 vote on several robbery counts and 11-1 on other charges.

The state of Louisiana has argued that the case doesn't meet the legal threshold for applying a decision retroactively.

More than a dozen organizations, however, have weighed in for Edwards, including the American Civil Liberties Union; the National Association of Criminal Defense Lawyers; Innocence Project New Orleans; the Lawyers' Committee for Civil Rights Under Law; the LDF; the Center on Race, Inequality, and the Law; and a group of former judges and prosecutors.

"In light of the profoundly racist character of the nonunanimous jury rule, preserving this integrity requires that the court allow collateral challenges to nonunanimous convictions," the Center on Race, Inequality, and the Law wrote in its brief.

In the latest high court case testing the boundaries of juvenile rights, this case asks how states should apply a Supreme Court ruling against life without parole sentences for minors.

A month after turning 15 in 2004, Brett Jones killed his grandfather, with whom he lived, after an argument about Jones' girlfriend secretly staying in his room. He was sentenced to life without parole.

declared life without parole sentences to be unconstitutional for juveniles in most cases, but chose to resentence him to life without parole again. The Mississippi later upheld this sentence, saying that Miller v. Alabama only required the court to consider juvenile-specific factors during the sentencing, which it did.

Jones, however, argued that the decision in Miller only allows a life without parole sentence if a child commits homicide and is deemed "permanently incorrigible." Jones argued that he does not fit this definition given the significant evidence of rehabilitation while in prison.

Since being incarcerated, Jones said, he has earned a GED, sought out work opportunities and is considered a good employee, had only one "significant disciplinary incident" since entering prison, and has expressed remorse for the crime.

The case has drawn attention from the National Association of Criminal Defense Lawyers, the ACLU, the Rutherford Institute and others.

In its amicus brief, the Juvenile Law Center wrote that the Mississippi court misunderstood the factors that the Supreme Court laid out when discussing how to evaluate whether an offender is "permanently incorrigible," and saying that it is important that courts be required to only assess those factors, but also to actually arrive determine a child is permanently incorrigible before delivering a life without parole sentence.

Over a dozen states, including Texas and Florida, have weighed in on the side of Mississippi, arguing that siding with Jones would be an "additional intrusion into States' sovereign interests," and that the Miller ruling should not apply to discretionary — as opposed to mandatory — life without parole sentences.

The solicitor general has also asked to participate in oral arguments on the side of Mississippi.

In a freedom of religion case, the FBI has asked the high court to reverse an appellate court decision that three Muslim Americans have the right under the Religious Freedom Restoration Act to seek damages from the agents who allegedly placed them on a no-fly list in retaliation for refusing to inform on fellow Muslims.

The case — which was originally dismissed before being revived on appeal — argues that the three were all targeted because of their religious beliefs and for being part of the Muslim community.

The FBI, meanwhile, has argued that the RFRA does not authorize cases against federal employees in their personal capacity, as the current case seeks to do.

The issue has drawn amicus briefs from over a dozen organizations, including American Atheists, Freedom from Religion, the Sikh Coalition, the American Arab Anti-Discrimination Committee, the Rutherford Institute, the General Conference of Seventh-Day Adventists and the Institute for Justice.

The American Arab Anti-Discrimination Committee wrote in its brief that being able to pursue civil suits in response to religious discrimination is key to enforcing the rights in the RFRA.

"For many Muslims living in the United States, the abuse of federal power described by respondents is as familiar as it is shocking," it wrote. "Injunctive relief cannot fully compensate aggrieved believers nor adequately deter future violations of their religious rights. Damages are essential to make them whole and to turn the page on an era where faith so often meets suspicion."

Bidwell said, however, that the implications of the case could go well beyond whether Americans can seek damages under the RFRA. The government's position could create a "presumption against damages" when interpreting other laws as well, she said.

"They're making a much broader argument," she said. "It's this idea that generally speaking suits for constitutional [violations] against government officials ... are disfavored, that there is a presumption against these sort of lawsuits."

Another case before the court this term asks it to interpret what types of past offenses trigger the 15-year mandatory minimum outlined in the Armed Career Criminal Act.

Charles Borden was convicted of possessing a firearm, despite being barred due to past felony convictions. At sentencing, the court ruled that the ACCA applied, making Borden's sentence a minimum of 15 years, though the court agreed to depart downwards because Borden offered "substantial assistance" to law enforcement..

Borden, however, argued that the 15-year minimum should never have been at play because the ACCA is only meant to apply to "violent felonies." He argued that his conviction for "reckless aggravated assault" should not qualify, saying that the ACCA does not apply to crimes committed with a reckless mens rea, or intent.

It's a distinction that could have major implications for defendants.

"If this court were to hold that an offense with a mens rea of recklessness qualifies as a violent felony under the Armed Career Criminal Act, it would expand the reach of ACCA's severe sentencing consequences to defendants whose predicate offenses bear little, if any, resemblance to the knowing and purposeful acts of violence Congress intended to target," the National Association of Criminal Defense Lawyers wrote in an amicus brief. "Such a broad application of ACCA is wrong as a matter of law, and it would result in unjust and disproportionate sentences for defendants nationwide."

In its brief, FAMM highlighted especially the impact the interpretation could have on people charged with common vehicular crimes that might result from falling asleep at the wheel or distracted driving, exposing many people who never intended to hurt anyone to harsh 15-year sentences.

"The unfair and absurd outcomes of this expansive definition, which stretches the statute's text and distorts its purpose, leave no room for an alternative: Crimes with a mens rea of recklessness are not violent felonies under the ACCA," FAMM wrote.