To walk a mile in Dennis Perry's shoes is to experience a level of injustice best reserved for nightmares, say those who spent years helping the Georgia man walk away from nearly two decades behind bars and a double murder conviction.

The Georgia Innocence Project has fought since 2004 to release Perry, 58, from a medium security prison in the Peach State's southeast on the basis that he's innocent of the 1985 fatal shooting of a Southern Baptist church deacon and his wife. 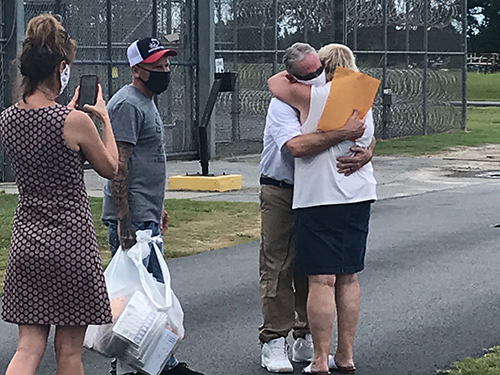 With support in recent years from a large pro bono team at King & Spalding LLP and the unearthing earlier this year of new DNA evidence linking an alternate suspect to the crime, the small nonprofit secured an order in July for a new trial, and Perry left his cell for the comfort of his wife and family.

"He is relieved to be out of prison and he's grateful that people listened — he's been proclaiming his innocence since 1985," Georgia Innocence Project Executive Director Clare Gilbert told Law360. "There is of course a level of frustration and fear and a weight hanging over his head because he's facing potential double murder charges and the trauma involved with being retried for something that he's so clearly innocent of."

Perry was arrested in 2000 and convicted in 2003 of the murder of Harold and Thelma Swain, a rural Camden County couple in their 60s who were gunned down on the evening of March 11, 1985, in the vestibule of the Rising Daughter Baptist Church during Bible study.

Still indicted, Perry is waiting on prosecutors to decide whether to retry him and has asked for privacy in the meantime. Brunswick Judicial Circuit District Attorney Jackie Johnson, whose office has steadfastly opposed Perry's freedom, said she won't decide until the Georgia Bureau of Investigation concludes its reexamination of the 35-year-old killings at her request.

Mark Spaulding of the Brunswick DA's office told Law360 the office had no comment on the case while waiting for the GBI's reinvestigation report, which would determine whether it was appropriate to move forward and how.

"We want to give them the space and time to do a thorough investigation," Spaulding said.

Perry's lawyers say his case is a sad reminder of the estimated 2,000 to 3,000 innocent people still wrongly incarcerated in Georgia, but that it also gave them a once-in-a-lifetime opportunity to free a man serving two life sentences.

King & Spalding joined the effort in 2018, helping to file a 182-page habeas corpus petition in June 2019 arguing there was no evidence against Perry, that he had a solid alibi and that prosecutors played dirty by secretly paying their star witness. 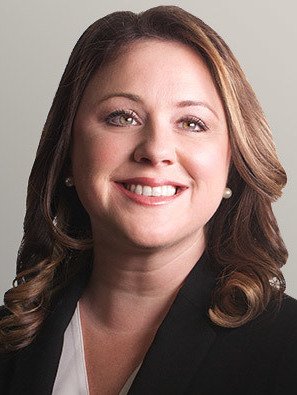 Susan M. Clare, an Atlanta partner at King & Spalding who assembled a team of predominantly junior associates for the job, said they were able to use the firm's large discovery center and latest technology to research what the Georgia Innocence Project couldn't. King & Spalding had more than 20 timekeepers on the case who spent in excess of 3,000 hours working it, she said.

"We recognized that it would be a lot of work, but we looked at the case and immediately thought that he had a strong innocence case, and we knew we had the resources," Clare said.

During research, Clare developed a gut feeling that a suspect from 1986 warranted particular attention. That hunch led to an unexpected DNA breakthrough that allowed Perry's lawyers to request a new trial in April and sidelined his habeas petition. 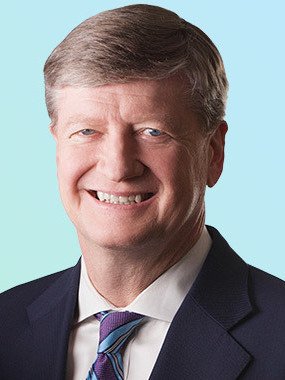 "I don't think you can catch lightning twice in a bottle like that," said Phil Holladay of King & Spalding in Atlanta, who helped lead the firm's pro bono work on the case. "I've been doing habeas cases for more than 30 years, and this is a one-of-a-kind experience."

The Swains were well-liked and their deaths shocked the tiny Spring Bluff community near Waverly, just west of Brunswick, according to dozens of reports in the case. It made national television on several unsolved crime shows, one offering a $25,000 reward, resulting in hundreds of suspects.

An anonymous tipster gave Perry's name to authorities in the investigation's early years after seeing a composite sketch of the suspect. Perry matched the killer's description of a young white man with mid-length hair, and his grandparents lived in Spring Bluff. But Perry was not picked from a lineup by the only witness at the church who spoke to the killer just before the shooting.

Perry was living and working just south of Atlanta at the time of the killings, about 300 miles from Spring Bluff, and his employer told investigators he was working the day the Swains were shot. Perry also didn't own a car and couldn't have traveled the four-plus hours to the church between being dropped home from work around 6 p.m. and when the shooting occurred around 9 p.m., his boss had said.

Initial lead investigators Deputy Butch Kennedy of the Camden County Sheriff's Office and Agent Joseph Gregory of the GBI eliminated Perry as a suspect and still remain convinced of his innocence, telling the court as much in a letter supporting his habeas petition. 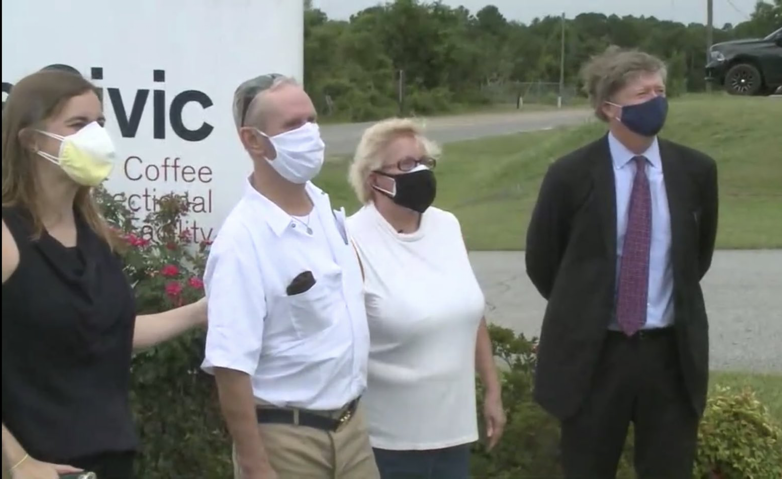 "There's no evidence to support his indictment," Clare of King & Spalding said. "It should be dismissed, and the DA should move swiftly to do that because Dennis has already been having his rights deprived for so long."

The key piece of physical evidence in the case was an unusual pair of prescription eyeglasses found inches from the Swains. A few hairs that investigators said belonged to a white person were wedged in the frame. The Swains, who were Black, had their own eyeglasses that were also found at the scene, and the nine worshipers at the predominantly African American church on the night of the shooting were also ruled out as owners of the distinctive glasses.

Investigators believed the eyeglasses, made from components of several different pairs, belonged to the killer, a near-sighted man who was likely to be a welder or machinist on account of the pitted lenses.

Perry had perfect vision and his DNA did not match the hairs on the glasses, the record showed.

But in the late 1990s, after a $40,000 reward was offered by a new team of investigators at the Camden County Sheriff's Office to solve the crime, the mother of one of Perry's ex-girlfriends came forward to implicate him. She started showing his photograph to church witnesses, suggesting it could have been him, Perry's lawyers said.

Prosecutors hid the fact that the woman asked for $25,000 to give testimony and was ultimately paid $12,000 after trial. She said in court that Perry told her during an unwitnessed conversation that he was going to kill a Black man, whom she understood to be Harold Swain, because the man had laughed at his request to borrow money.

Perry's lawyers said his work records from 1985 weren't available at the time of trial to support his alibi and that he was found guilty on the bought testimony.

"It was totally unethical and unconstitutional conduct by the DA's office, in terms of paying a witness for testimony and yet not disclosing that to the defense," Gilbert said. "And the eyewitnesses' IDs were extremely flawed and tainted. This case was so clearly a wrongful conviction."

The night of his conviction, Perry waived his right to appeal in exchange for prosecutors dropping their request for the death penalty. No one in power would believe his pleas of innocence for another 17 years.

In 2004, when Perry sought help from the Georgia Innocence Project, the nonprofit was only two years old and had very few resources. It couldn't afford the full transcripts in the case, and his lawyers were still making do with portions of the record when filing the habeas petition.

Gilbert said the group, separate from the national Innocence Project, managed to test the little evidence remaining from the scene in 2015 but that most of the physical evidence in the case was missing or not useful.

"The glasses themselves have been lost or destroyed," Gilbert said.

She said evidence the group tested in 2015 has since been lost or destroyed by the DA's office or sheriff's office.

The nonprofit retrieved countless documents in the case through dozens of information requests under the Georgia Open Records Act, and partnered for the first time with King & Spalding in 2018 to pursue habeas litigation for Perry.

It was one of the Georgia Innocence Project's investigators who in late February collected the crucial DNA evidence linking former suspect Erik Sparre to the crime scene.

Sparre, 57, was arrested in the late 1980s then released after a search of his home uncovered no evidence, and a man claiming to be the manager of a Winn-Dixie store in Brunswick said Sparre had been working there the night of the shooting.

Sparre had allegedly bragged about being the shooter to two ex-wives, one of whom identified the unusual glasses found at the scene as being like a pair he had made, according to court documents. Sparre was racist, owned several guns and had worked as a welder, his ex-wives told authorities.

Clare said they couldn't compel Sparre to give a DNA sample, but an investigator working with the Georgia Innocence Project managed to get a voluntary hair sample from his mother. It matched the DNA from the hairs on the distinctive eyeglasses found beside the Swains.

"I think we all thought it was such a long shot, so getting that call and finding out it was a match, I'll never forget that moment," Clare said. "It was a remarkable result."

Holladay, soon to retire from King & Spalding, said the phone call to Perry in prison about the DNA results was emotional for everyone.

"I think that for the first time, he probably began believing that maybe, just maybe, there was a chance he'd get out," Holladay said.

Gilbert of the Georgia Innocence Project said the state spent significant funds defending Perry's incarceration, even after learning that Sparre's DNA matched hairs from the scene. She said that kind of wasted taxpayer money is a particular problem in Georgia, which has a culture of official indifference to injustice or the integrity of convictions.

"You can have a clearly innocent person in prison and there is not this burning need among prosecutors to rectify and correct that, and that is a major issue and something we and others are working to help shift that culture to one of integrity and accountability," Gilbert said. "There just has to be some real soul-searching, and we hope that stories like Mr. Perry's provide a window into deeper discussions and reform."

Perry's lawyers said they are committed to representing him until he's officially exonerated and hope the DNA evidence linking Sparre to the scene leads to justice at last.

"We'd like to achieve justice for Mr. Perry but also justice for the Swains as well," Clare said.

Clarification: This article has been updated to better reflect the Georgia Innocence Project's understanding of who's responsible for losing or destroying evidence in the case.