Greenberg Traurig shareholder Karen Kennard had just started her second year of law school when she watched her oldest brother, Tim Cole, convicted of a rape he didn't commit.

The only African American enrolled at Texas Tech's law school at the time, Kennard said the 1986 trial nearly shattered her faith in the law but ultimately reshaped her understanding of the criminal justice system and how to make it fairer for people like her brother. Cole died in a Texas prison nine years before DNA evidence exonerated him. 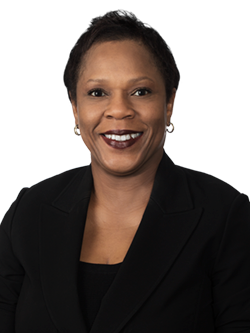 Greenberg Traurig shareholder Karen Kennard was inspired by her brother's wrongful conviction to try to create change in the justice system.

"I have wanted to be a lawyer since I was in the third grade. But I sat through that one-week trial and I wanted to quit law school," Kennard said. "It was my mother and my brother and my dad who told me you never quit."

Kennard said her brother's case continues to drive her to make the justice system better, both through her professional work and pro bono legal assistance.

"I had seen a system that didn't match up to everything I wanted to do my entire life," Kennard told Law360. "I had to reframe and come to understand that our system is not perfect."

Kennard spoke about her family's experience for the first time during a webinar hosted by Greenberg Traurig last month amid a national reckoning on race and criminal justice following the deaths of George Floyd, Ahmaud Arbery, Breonna Taylor and other unarmed Black people this year.

"It's pushed me to see what more I can do," Kennard told Law360. "Having this conversation is a small step forward by raising awareness that, yeah, this can happen to everybody and that anybody can make a difference."

Kennard said she's also haunted by Floyd's last words as a police officer pressed his knee into his neck and he gasped, "I can't breathe."

"My brother died of an asthma attack in prison after serving 13 years," Kennard said. "Floyd's last words may also be the last words of my brother as he was having an asthma attack. That's something that stays in my head and I can hear that over and over again."

Cole died of an asthma-induced heart attack in 1999 after he was sentenced to 25 years in prison for an aggravated sexual assault committed in near the same Texas Tech University campus where Kennard herself went to law school.

An African American man raped 24-year-old Texas Tech student Michele Mallin at knifepoint in March 1985. Cole, a 26-year-old Army veteran, was studying business at Texas Tech at the time and that night he was doing schoolwork at home while his brother hosted a card game.

But Cole became a suspect two weeks later after speaking with a detective outside a pizza joint near campus a few blocks from the attack, according to the Innocence Project. He was arrested and charged when Mallin identified Cole in a six-photo lineup where he was the only person pictured looking at the camera and the other five were mug shots.

"I did not commit the crime," Cole told the Lubbock Avalanche-Journal when his trial began in September 1986. "All I can do is wait and see how the justice system will work out."

Mallin testified in court that Cole was the perpetrator and his attorney used an alibi defense, according to the Innocence Project. Cole's brother and his friends testified he was at the apartment during the attack. Cole also showed evidence that he had severe asthma and didn't smoke cigarettes like Mallin said her attacker did.

But an all-white jury convicted Cole after six hours of deliberation, according to the Innocence Project and the Lubbock Avalanche-Journal. Cole's initial appeals were denied.

When the statute of limitations on the rape expired in 1995, Jerry Wayne Johnson wrote to Lubbock officials confessing to the rape, according to the Innocence Project and the Lubbock Avalanche-Journal. Johnson was already in prison serving a 99-year sentenced for two other sexual assaults and confessional letters he continued to send over the years went unacknowledged. Cole died without knowing about the letters and it wasn't until 2007 that the Innocence Project of Texas heard about Johnson's letters, visited him and obtained a confession.

The next year, Cole was cleared by DNA evidence that showed Johnson raped Mallin.

"The person who committed the rape in my brother's case is a very, very, very horrible person and he deserves to be in prison for the rest of his life," Kennard said. "But because the system is not perfect, there are people like my brother who get caught up in it and the ability to extract themselves from it is so difficult."

Cole became the first person in Texas to receive a posthumous exoneration in 2009 and the state's first posthumous pardon in 2010. Texas laws increasing compensation to exonerees and establishing a panel on wrongful commissions were also named after Kennard's brother. And exactly 28 years after he was wrongfully convicted, Lubbock dedicated a park and unveiled a bronze memorial statue in Cole's honor near Texas Tech campus in 2014.

Mallin also joined Cole's family in trying to clear his name, work that Kennard said was led by her mother, Ruby Session Cole.

"My mom did the overwhelming majority of work to support my brother, to clear his name, and to support our family over that long period of time when we were searching for just anything to try to keep him uplifted and then exonerate him after he died," Kennard said.

At the time, Kennard was a city attorney in Austin and she said her involvement in her brother's case was limited by the potential for conflicts. But she said she still helped connect her family to the right people and make calls.

Kennard and her family have worked with the Innocence Project of Texas for the last decade. She said Greenberg Traurig's pro bono program also works on several innocence issues. When she first moved to Austin, she would volunteer Monday nights giving legal advice at an NAACP clinic.

Kennard said her brother's wrongful conviction changed how she approached her work, particularly while representing a police department navigating officer-involved shootings and federal probes as a city attorney.

"I really pushed my clients to look at themselves critically to make sure that they are doing everything they can do to follow their policies and have policies that reflected exactly the values they say they want to reflect," Kennard said. "I was able to push my clients in a way that maybe somebody who hadn't experienced what I've experienced maybe didn't or just couldn't."

Kennard said she wants to encourage others to get involved in criminal justice reform. While the issue of whether someone is innocent resonated with her family, she said there are dozens of other avenues to try to make the system better. She said she'll continue to use her experience to help drive change, even if the issue of innocence is "still somewhat difficult for people to believe."

Shortly after her brother's conviction, Kennard said she lost a close friend she made in law school who told her, "everybody who goes to prison says they're innocent and then they find religion."

"It's been a long time coming where people are now more open to the idea that innocent people do get convicted," Kennard said. "There is always the possibility that maybe the system did not work for somebody."