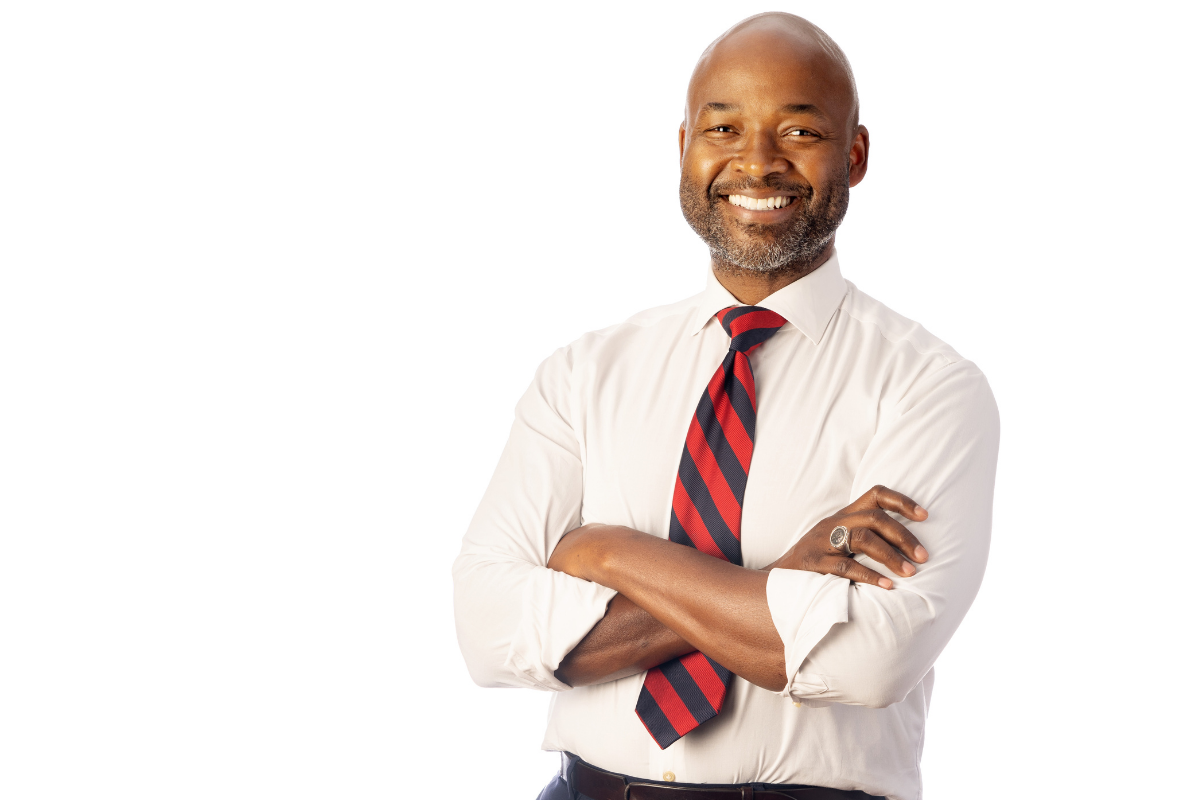 
An embattled City Council president and criminal defense attorney is entering a New Orleans district attorney's office with plans to overhaul its agenda and radically reform a criminal justice system that historically has had one of the higher incarceration rates in the U.S.

Jason Williams on Monday takes over the top prosecutor role in Orleans Parish after becoming the latest in a long line of progressives across the U.S. to win a district attorney election by vowing to combat mass incarceration and curtail overly punitive policies. He won a commanding victory in a runoff election in early December against former criminal court judge Keva Landrum, a candidate backed by much of the city's political establishment, while facing an 11-count indictment on federal tax fraud charges.

Williams, who served as a City Council member since 2014, campaigned on reforming the mission of the prosecutor's office and decriminalizing certain crimes stemming from nonviolent offenses and poverty. He's pledged to curtail the cash bail system, end prosecutions of people for marijuana possession and to never transfer minors from juvenile court to be prosecuted as adults.

He also plans to open a civil rights unit on his first day to investigate wrongful convictions and excessive sentencing, and to form an independent domestic violence unit that looks at the problem more holistically.

Williams told Law360 that the raft of policy reforms are part of a broader "reckoning" with what he called a racist and sexist criminal legal system. He said it's become clear that tools like cash bail do not make the public safer and that the DA's office must become an avenue where root problems of violence and drug addiction are more proactively addressed.

"Very little of the work of law enforcement has been in the world of crime prevention and reducing the number of incidents," Williams said, noting that he'd treat addiction like the "health problem it is" and work to better address offenses stemming from trauma and mental illness.

Those who know the DA-elect told Law360 that he's for years been focused on reorienting the way the criminal justice system treats marginalized communities and those accused of crimes.

In addition to his perch on City Council, Williams has managed a law firm, Jason Rogers Williams & Associates, offering criminal defense services. He's worked with the Innocence Project New Orleans, a group working to free wrongfully convicted prisoners, and has also pushed for reducing the city's jail population and increasing funding for public defenders, who are annually given few resources for exorbitant caseloads.

As a defense attorney, Williams was "fundamentally different" than traditional lawyers and prosecutors "in how he treated people in the court," Derwyn Bunton, chief public defender of the Orleans Public Defenders, said.

Nandi Campbell, who was elected to a criminal court judge seat in New Orleans in November on a similar platform as Williams, said her time working with the DA-elect's firm from 2010 to 2014 changed the way she looked at cases.

"We were not allowed to practice in a vacuum," she said, adding that attorneys were pushed to confront all aspects of the legal system and how it impacted not just their clients, but their families. Few people are questioning the system as a whole in their work, she said, which can have devastating impacts for families.

"It kind of opened my eyes to why we incarcerate the most people here," Campbell said. "It made me realize we have an assembly-line system that doesn't work."

Nicole Burdett, an attorney at Williams & Associates, noted that Williams was urged by many people to run for mayor a couple years ago, but that he chose to focus specifically on the criminal justice system.

"He didn't [run for mayor] because he believes that the criminal justice system here plays such a vital role in the community as a whole," Burdett said. His position on the City Council helped him understand that "real change" starts with how the district attorney's office handles certain types of cases, she added.

Williams, however, will face a significant challenge as he enters office. He and Burdett in June were indicted on charges they aided in the preparation of false tax returns from 2013 to 2017. Williams and Burdett have dismissed the legitimacy of the accusations. Burdett said they would "absolutely" show they committed no wrongdoing.

The U.S. Attorney's Office for the Western District of Louisiana, which is prosecuting the case, declined to comment beyond its public filings and statements in court. It is unclear when the case will go to trial due to COVID-19 restrictions.

Despite the accusations, Williams secured nearly 60% of the vote in the December runoff, a feat Bunton said may be an indicator of "how thirsty" voters were for "big change."

"I think voters were rejecting, even in the face of his own personal troubles, the policies of the past," Bunton said. "It's an indictment that if proven knocks him out of his position, and folks were willing to take that risk."

Part of the Progressive Wave

The position of district attorney offers enormous power, giving those in the role wide discretion on who to prosecute and what types of criminal cases to prioritize, legal experts say.

It's why who's in that role "matters so much for the quality of justice," said David Sklansky, a former prosecutor and Stanford Law School professor.

"Prosecutors are the gateway into the criminal justice system," Sklansky said. "They are the point of contact between law enforcement and courts. And more than anyone else, a prosecutor is responsible for making sure cases are initiated when they should be."

Between 2008 and 2020, that authority in the Orleans Parish was granted to Leon Cannizzaro, who decided against running for re-election over the summer. Some of Cannizzaro's final years coincided with dwindling homicide rates; however, critics slammed his aggressive tactics and "win at all costs" prosecutorial approach.

Cannizzaro's office was accused of using fraudulent documents to coerce witnesses into complying with its requests. Cannizzaro also faced scrutiny over his use of the state's habitual offender statute, which can cause longer sentences for repeat felony convictions. Williams has pledged to stop using the habitual offender enhancements.

"That does reflect a turning point in the Orleans Parish," ACLU of Louisiana Advocacy Director Chris Kaiser said.

In recent years, criminal justice reform has gained more attention in Louisiana, which had the highest imprisonment rate in the nation in 2019. Lawmakers in 2017 implemented a bipartisan package of reforms designed to reduce the prison population by 10% within a decade, in what Kaiser praised as something that "really did move the needle on our incarceration rate."

Still, pronounced racial disparities in the prison population persist and the state's per capita pretrial incarceration rate remains the highest in the U.S., an ACLU of Louisiana March 2020 report found. The report showed racial disparities in pretrial detention were most pronounced in the Orleans Parish, where Black individuals between 15 and 24 were about 20 times more likely to be jailed following arrest than their white peers.

Williams has called for treating addiction as a medical problem and developing diversion programs for people arrested for drug possession or minor addiction-related offenses. He told Law360 that handling drug and addiction cases differently would free up resources to tackle the city's murder rate and restore trust in marginalized communities.

Some prosecutors, including former Attorney General William Barr, claim the stances embraced by officials like Williams present a threat to public safety. Barr said in 2019 progressive prosecutors were "anti-law enforcement." A report from the conservative Heritage Foundation in October argued that progressive prosecutors' policies are causing "disastrous consequences" for crime rates.

2020 marked a vital victory for the progressive movement, however, with reform-minded candidates winning elections in regions including Chicago, Texas, Michigan, Arizona and Los Angeles, the largest prosecutor's office in the country.

"It's clear at this point that this movement is spreading," Sklansky said. "It taps into a broad change in the way that Americans think about crime and punishment."

Can He Shake Up the System?

As part of an effort to overhaul the DA office's culture, Williams required employees to reapply for their jobs. But he will face challenges beyond setting up the right team in his first months.

Williams takes on the role after the City Council approved a 25% cut to the office's annual funding. The office's proposed operating budget for 2021 was more than $11 million and there is no guarantee it "will be able to self-generate enough other funding" beyond the $5.4 million allocated by the city, Cannizzaro's office said in December.

The COVID-19 pandemic and the economic recession it caused also coincided with surges in violent crime across the U.S., including New Orleans, where the homicide rate jumped by roughly 60% in 2020, according to data from the City Council.

"Anytime you have a huge hit to the economy, you're going to see those spikes in crime," Williams said. He noted that COVID-19 protocols are also creating a mental health crisis across the U.S. and that economically disadvantaged students are being hurt by the shift to remote learning, factors he believes lead to crime.

"We need to start having a more robust conversation in the criminal legal system about how we are dealing with and treating mental health issues as it relates to the pandemic," he said.

The ACLU's Kaiser also said that period spikes in certain areas of crime may inspire calls for aggressive responses. The onus will soon be on Williams to demonstrate his policies are benefiting the public, Kaiser said

Williams said during his campaign that he planned to regularly publish data about his office's work, including racial and gender breakdowns of who it prosecutes. He acknowledged that his policies will likely face some opposition, however he said a transparent approach would hopefully get other parts of the criminal justice system on board with them.

"There's certainly going to be pushback," he said. "I can't predict where it will come from, but I hope by being transparent we can bring everyone along as these things are being implemented. Because the people of the city of New Orleans have voted for radical reform of the criminal legal system."

Williams' victory followed an election cycle where conversations about criminal justice in New Orleans experienced unprecedented engagement from voters, sources who spoke with Law360 said. But what Williams' election means for the region "remains to be seen," Bunton said.

"When the self-styled progressive prosecutor comes into office, there's a lot of expectation of a lot of change very quickly. And the record on that nationally has been a bit mixed," he added.