The COVID-19 pandemic has both emphasized the importance of more widespread legal aid and made administering such support more difficult, according to legal professionals, including state supreme court justices, speaking at a recent conference. 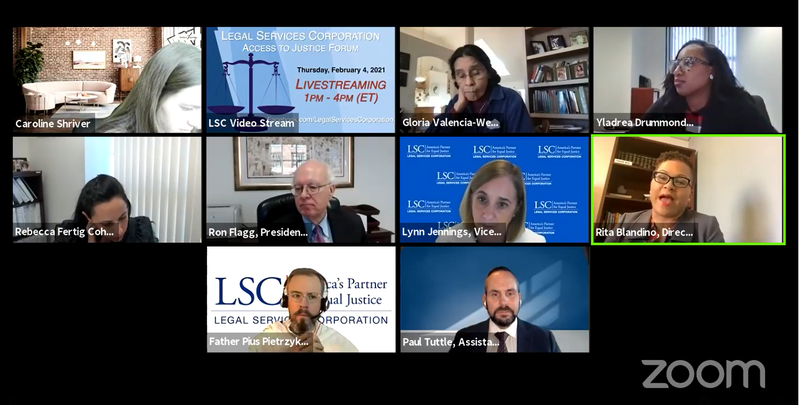 A screenshot of the Legal Services Corporation's virtual panel on local courts' technological innovations during the COVID-19 pandemic.

A trio of back-to-back online webinars on Thursday was organized and moderated by the Legal Services Corporation, a congressionally created nonprofit entity that supports legal aid organizations and efforts across the country. There, legal professionals with a front row to COVID-19's impact on local courts discussed eviction moratoria, remote hearings, staff safety and other concerns affecting Americans' access to equitable justice.

"COVID-19 has led to significant increases in the need for civil legal aid, as everybody here knows," U.S. Rep. Brian Fitzpatrick of Pennsylvania, the new co-chair of the Congressional Access to Legal Aid Caucus, said during opening remarks. "[It is] most especially [so] for low-income families facing job losses, financial burdens and innumerable other issues stemming from this crisis."

Near the top of these issues sat the eviction crisis. The LSC's press release noted that its grantees reported a 95% increase in eviction cases, which panelists said their own judiciaries and organizations were dealing with in a variety of ways.

For instance, during a panel with various state supreme court justices, Nevada's Justice Kristina Pickering highlighted the state bar's eviction mediation program, which brought several groups together to develop eviction mediation protocol and reduce the judiciary caseload. Another speaker, Brad Lewis of the Nevada Supreme Court's Access to Justice Commission, elaborated that about half of the cases seen through the program ended in agreement between the two sides.

"Whether it'll work or not, long-term, I don't know," Justice Pickering said. "But it's an evolving process, and everybody's working together."

Another panel with legal service providers' directors illustrated how inconsistent laws can both open and close doors for those facing evictions. Colleen Cotter, executive director of The Legal Aid Society of Cleveland, noted that the city's right-to-counsel program helped her group advocate for clients left vulnerable by Ohio's lack of a statewide eviction moratorium. That said, she also described the "mess" of differing and confusing eviction hearing rules in the organization's service areas outside of Cleveland.

"We're going to have so much better housing stability in the city of Cleveland than in the suburbs and other counties," Cotter said. "We don't have the resources to represent everybody, and people are getting evicted left and right in spite of the CDC moratorium."

Panelists also addressed the technological pivots they have made during the pandemic, as well as their limits. Texas Supreme Court Chief Justice Nathan Hecht highlighted the increased turnout for remote proceedings and programs to give people mobile broadband access while admitting that this presented challenges for rural districts outside of broadband networks.

During the third panel, Rita H. Blandino, director of the D.C. Courts' Domestic Violence Division, observed that adapting to shifting circumstances was challenging enough. Despite that, she said that concerted collaboration with stakeholders helped her branch navigate these conditions.

"We actually leaned on each other in March, when this all started, and huddled and said, 'How do we continue to do what we've been doing virtually?'" she recounted. "That's part of the reason we've been able to sustain these operations."

Among the other topics addressed were the potential exposure risk for employees who had to report to offices, potential additional issues for underresourced tribal courts, entrenched bureaucratic processes and the resources needed to tackle these problems, particularly when the pandemic clears and these issues remain.

As several speakers noted, Thursday's panels took place in lieu of what would have been the Legal Services Corporation's annual convention, which was set to take place in Las Vegas. Other prominent panelists and speakers included Rep. Fitzpatrick's co-chair, U.S. Rep. Mary Gay Scanlon of Pennsylvania, and vice chair Rep. Tom Emmer of Minnesota.