Alternative Courts Not A Catch-All Fix For Mental Illness Crisis 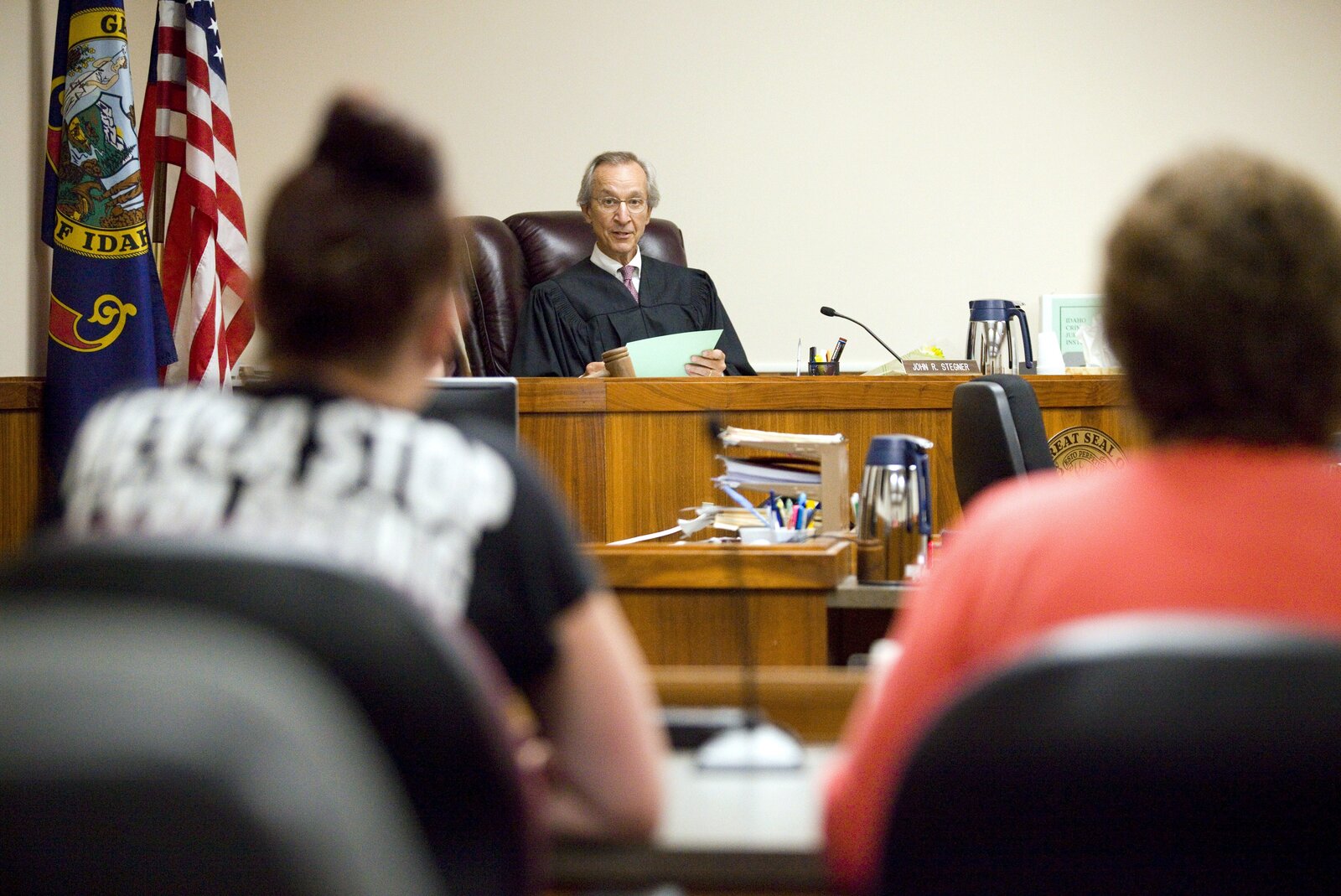 Mental health courts have become a growing alternative to incarceration that allow defendants to participate in health treatment rather than go to prison or jail. More than 450 mental health courts exist in the U.S. (Geoff Crimmins/The Moscow-Pullman Daily News via AP)


The number of mental health courts in the U.S. has steadily grown over the last 20 years, but judges and advocates say that states shouldn't solely rely on these courts to end the incarceration of people who have mental illnesses.


Today more than 450 adult mental health courts exist in 45 states across the U.S., according to the Substance Abuse and Mental Health Services Administration's GAINS Center for Behavioral Health and Justice Transformation. In January, Nebraska started its first mental health court in Sarpy County, becoming the 46th state to offer this problem-solving court program.

Mental health courts are defined as courts that have dockets specifically to handle charges involving defendants who have been diagnosed with a mental illness and allow these individuals to participate in health treatment rather than being sentenced to incarceration, according to a report by the Council of State Governments Justice Center, a nonprofit that conducts research on how to improve criminal justice.

While organizations like the CSG Justice Center offer states with materials about best practices for mental health courts, a universal model for these courts doesn't exist and some models implemented by states are better than others.

Some of the differences between mental health courts are the level of offenses they handle, mental illnesses that qualify, the treatment options offered, the length of the program, whether charges will be dropped upon completion of the program or whether a guilty plea is required to participate in the program, according to the CSG Justice Center.

Judge Joyce Campbell, who is chair of the Ohio Supreme Court Commission on specialized dockets that include mental health and drug court, told Law360 that her court only handles misdemeanor cases including individuals who have a diagnosable mental illness like bipolar disorder, major depression or schizophrenia.

In Judge Campbell's court, she sees mental health court participants for roughly two years while they complete the court's four-phase program. During that time, Judge Campbell makes sure participants have their medications, are in treatment and have housing.

According to Judge Campbell, mental health courts are not more expensive to run, but they do require a lot of work and dedication to operate without additional pay.

"[Courts] just have to reach out to the resources that are available in [their] community and bring them all together," Judge Campbell said.

However, some judges and advocates say that people who commit low-level offenses and have mental health problems should be identified and directed to mental health services without being arrested and filtered through the court system at all. According to studies, the majority of arrests of people who have a mental illness are for nonviolent misdemeanors such as treprassing, loitering or public disturbance.

Debbie Plotnick, vice president for mental health and systems advocacy at Mental Health America, said that ideally people who are having a mental health crisis would be immediately directed to crisis centers by law enforcement officers or mental health specialists who work with officers known as co-responders.

"Law enforcement needs to understand that people who are experiencing a health crisis and call 911 are not committing crimes," Plotnick said.

But many states and counties don't have crisis centers and employ law enforcement officers who don't have mental health training as first responders to mental health crisis calls. Without specialized training, officers often don't know how to de-escalate situations involving someone who might be manic, hallucinating or paranoid, according to Plotnick.

The result of these situations can lead to individuals resisting arrest or unintentionally assaulting officers, which are felonies that come with harsh penalties than nonviolent misdemeanors. In the worst-case scenarios, people who are mentally ill can be injured or killed in these law enforcement encounters.

So courts are left in a conundrum where they either help people who have mental illness and are arrested, even if it would be better for courts not to have to handle these matters, or house these individuals in jails or prisons where they are unlikely to get adequate treatment and their mental health will get worse, and they will likely be arrested again after being released.

"Without treatment available in the justice system, we're failing to recognize the trauma and behavioral health needs that people are struggling with, and as a result, are not addressing the root of the problem that brought them into the justice system," Dougherty said. 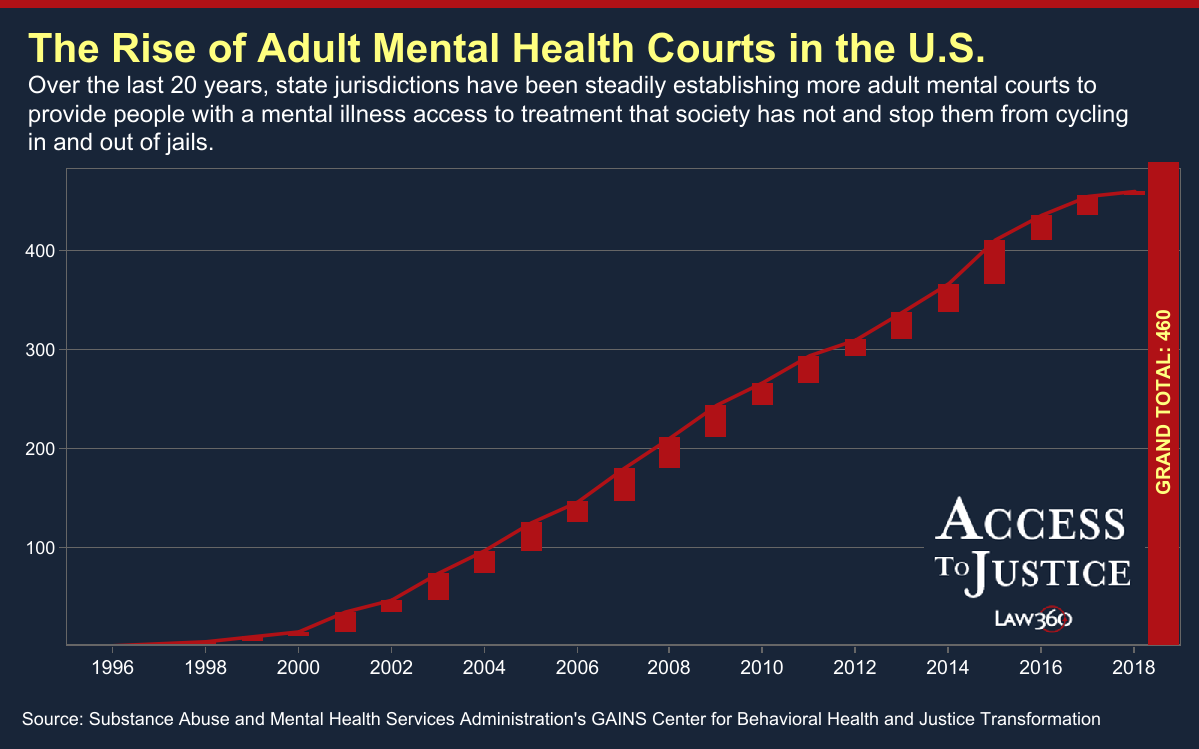 
Mental health courts, which are modeled after drug courts, came into existence in the 1990s in response to the growing number of people with mental illness entering the criminal justice system as a result of nationwide closures of public mental health hospitals, according to the Crime and Justice Research Institute, a nonprofit research organization.

Some advocates argue that mental health courts can be unfair if people have the threat of incarceration looming over them if they relapse while participating in the court's program. These advocates say that it is unfair to punish people who are struggling to overcome their mental illness.

"I strongly advocate for more community treatment for those who have mental health needs, because there's a whole lot of people out there who are struggling with mental illness and families are watching and trying to support them through those struggles but don't have access to treatment," Doughtery said.

Plotnick said that she hopes the federal government's designation of 988 as the national hotline number for mental health crises will decrease the number of cases that end up before mental health courts.

Last year, Congress passed the National Suicide Hotline Designation Act of 2020 that requires the Federal Communications Commission to designate 988 as the national mental health hotline number. The law provides funding for states to set up the instracture needed to redirect all 988 calls to the existing National Suicide Prevention Lifeline, according to the law.

But there will always be a small number of cases that courts will have to deal with involving individuals who have severe mental illness and can be extremely violent because they are not getting the treatment that they need, according to Judge Campbell.

"I pray daily that I will be put out of business when it comes to the mental health docket, but I don't see that happening," she said.

Correction: An earlier version of this story included a transcript error in a quote. That error has been fixed.