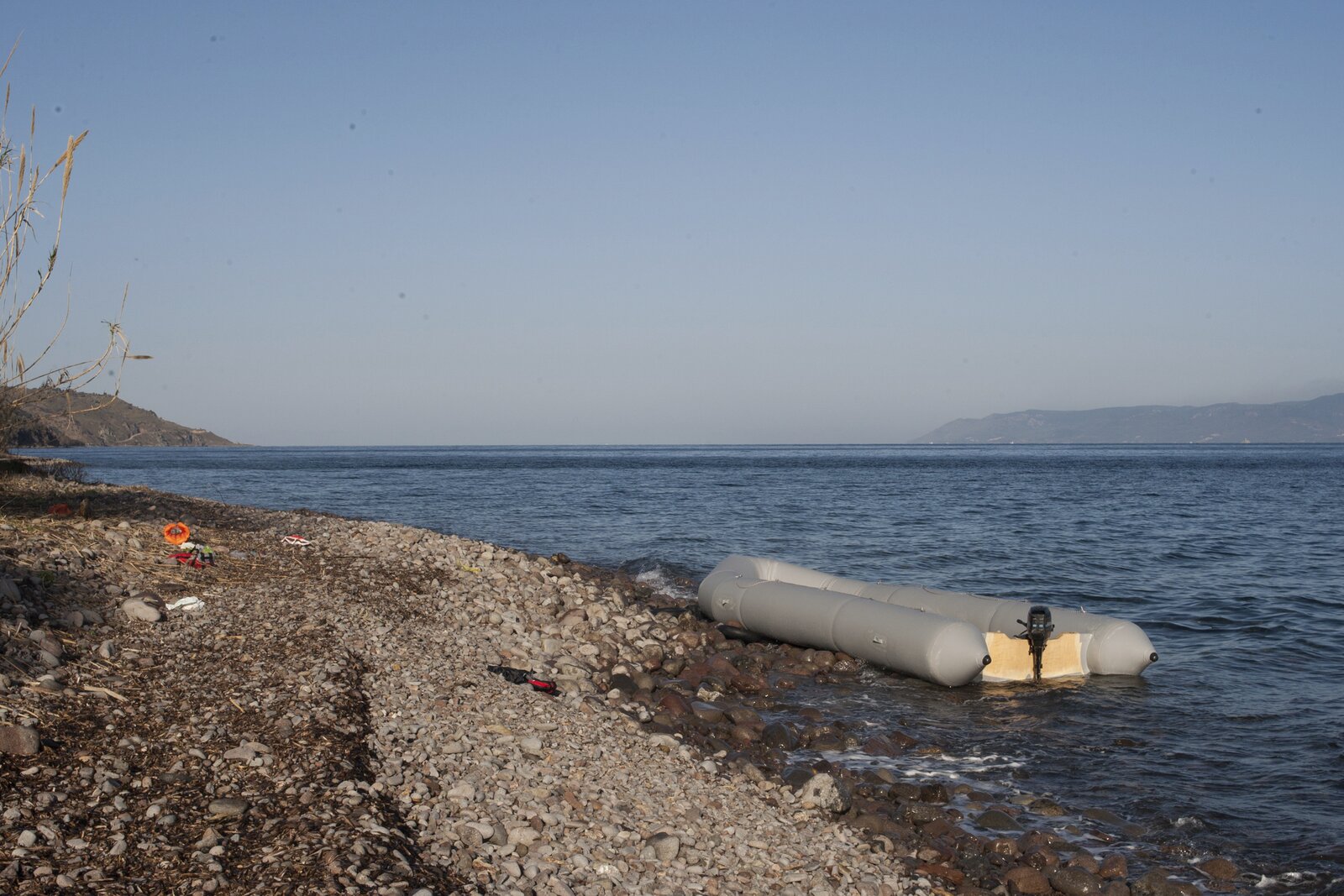 Thousands of refugees arrive in Greece's Aegean Islands every week, where there are increasing efforts to prosecute migrants and otherwise push back on immigration, according to advocates. (Grigoris Siamidis/Sputnik via AP)


Over 21,000 people have died trying to cross the Mediterranean Sea into Europe since 2014, according to the International Organization for Migration.

But a 25-year-old man from Afghanistan is believed to be the first parent to face criminal charges of child endangerment in the European Union after his 6-year-old son died on that journey.

He is being charged with exposing a child to danger, a felony under Article 306 of the Greek penal code, in what refugee advocates describe as an example of the criminalization of migration. Other recent examples of such efforts include a Syrian man sentenced to 52 years behind bars in Greece for driving a migrant boat and an Afghan woman prosecuted for arson because she attempted suicide by setting herself on fire.

The criminal charges lobbed at the father who lost his son, according to the man's lawyer and to Norway-based nongovernmental organization and monitor Aegean Boat Report, are a smokescreen meant to cover up the Hellenic Coast Guard's responsibility in the child's death and distract from the increasingly punitive and violent ways Greece has tried to deter refugees.

The father, who is known as N.A. and did not want his name or that of his son published, is fighting the charges and has filed a suit against the coast guard for failing to save the boy. But his lawyer, Dimitris Houlis, says N.A. is up against a legal system that treats refugees as second class.

On the night of Nov. 7, 2020, a boat was approaching Samos, a Greek island slightly over a mile from the Turkish mainland, carrying a few of the 1.2 million people who have traveled the Eastern Mediterranean route to Europe since 2014.

N.A., a passenger on the boat, called Aegean Boat Report's Tommy Olsen to ask him for assistance because the vessel had capsized. Olsen said that migrants call organizations like his for help because they do not trust local authorities in Greece.

In the background, Olsen heard people screaming in multiple languages. N.A., whose son had gone missing, eventually passed the phone to someone else to keep talking to Olsen because he was too distraught to talk.

Olsen relayed the boat's coordinates to the Hellenic Coast Guard. At 2 a.m., the passengers on the boat called Olsen back, saying no one was coming to help them. Some time later, two coast guard ships showed up, shined their searchlights, and left, never to return, according to Olsen's account of what the people on the boat told him.

The coast guard may have intended to push the migrants back to Turkey to prevent them from seeking asylum, according to Houlis and Olsen — an alleged violation of international human rights law that groups including Human Rights Watch have repeatedly accused Greek law enforcement of perpetrating.

Every migrant arriving in Europe has the right to seek asylum, but a nonprofit monitor says police and, until March 2020, the Turkish coast guard make sure most of them don't reach the shore.

A few men made it to the shore, including N.A., and tried to walk in the pitch darkness to get help from the remote area where they had landed. At 6:30 a.m., they ran into a Samos Port Police vehicle; the police then dispatched a search team.

At 9:30 that same morning, a coast guard rescue ship that had been alerted by the Samos police arrived back at shore, carrying a severely injured pregnant woman and the lifeless body of N.A.'s son.

Dimitris Tsinias, the chief of the port police on Samos, said in an interview with The New York Times that a rescue vessel was dispatched to the area at midnight and that the woman was found at 3 a.m. and the boy's body at 6 a.m.

Olsen said this raises the question of why the rescue team waited until 9:30 a.m to get to shore instead of getting both the woman and the child to medical care as soon as possible.

On its website, Aegean Boat Rescue highlighted the apparent discrepancies in Tsinias' timeline and accused him of lying.

Olsen and Houlis, as well as his client, believe the coast guard failed in its duty of rescuing people at sea that night because the people in distress were refugees and they did not act quickly enough to save the boy.

"The boy wore a life vest and he drowned from having a lot of water in his lungs. He could have been saved," Houlis said.

N.A., who has been granted asylum in Greece, is to stand trial before a panel of three senior judges at the Court of Appeals in Samos, which is the procedure for felonies. He faces up to 10 years in prison. A court date has not been set.

The coast guard did not respond to requests for comment.

Houlis said the case against N.A. is riddled with irregularities. The coroner on Samos took 12 days to conduct an autopsy, according to Houlis. When she finally performed one, her report showed the time of death was 11:45 p.m., before the coast guard was called, which would exonerate the service of responsibility. But a battery of medical experts consulted by Houlis said that it is not possible to determine a time of death down to the minute after 12 days had passed.

The coast guard is pressing charges against N.A. to distract from its own responsibility in the boy's death and to punish N.A. for attempting to seek asylum in the first place, according to Houlis.

The Greek coast guard systematically carries out violent pushbacks and collective expulsions in order to return migrants to Turkey, in violation of Greek, European and international law, according to Human Rights Watch and 28 other human rights organizations who signed an open letter to the Greek parliament in March.

N.A.'s 6-year-old son is just one victim of those punitive policies, Houlis said.

For decades, migrants and refugees have tried to cross the Mediterranean into Europe in hopes of working to support their families back home or of escaping violence. The most recent peak in arrivals came in the mid-2010s, at the height of the Syrian civil war. It was also the deadliest period for migrants: 5,143 people died in the Mediterranean in 2016, according to the International Organization for Migration. The body of water currently remains, in the words of scholar Harsha Walia, "the world's deadliest border."

The Greek coast guard, police and border patrol, sometimes aided by masked and armed men, have employed violent tactics to push migrants back, according to Human Rights Watch. Those tactics range from putting people on buses headed to the Turkish border, to picking up unaccompanied minors who arrive on Greek shores and putting them in life rafts with no motors so they would drift back to Turkey, to shooting migrants dead at the land border, according to Human Rights Watch.

Greek elected officials have denounced these allegations as fake news propagated by the Turkish government.

In the same hearing, Michalis Chrisochoidis, the Greek minister of citizen protection, painted Greece as a small country that is overwhelmed by high numbers of asylum seekers and scapegoated by other European countries that refuse to give it sufficient support. He also claimed without evidence that Turkish President Recep Tayyip Erdogan was using refugees as a pawn to harm Greece.

The reported pushbacks are an alleged violation of the human rights law principle of non-refoulement, which absolutely prohibits forcibly returning people, regardless of immigration status, to a country where they face serious danger.

Olsen sees the pushbacks as part of a policy of deterrence given tacit support by the European Union, a policy that is also exemplified by Greece's refugee camps, which the UN High Commissioner for Refugees has slammed for overcrowding and lack of sanitation.

"Pushbacks are a message, and the situation in the camps is a message. They want everyone removed from Europe," Olsen said. "If you treated animals the way they treat people in the camps, you'd be arrested."

He added that in his work in collaboration with the Global Legal Action Network, a Greek legal aid organization, he had come across several potential human rights abuse cases that were not taken up with a Greek court because everyone knew such efforts would be doomed to fail.

European Commissioner for Home Affairs Ylva Johansson in June 2020 called on Greece to investigate all reports of pushbacks, noting that the EU does not have the power to investigate member states' law enforcement and border control.

Some observers, including legal aid organization Legal Centre Lesvos, which provides legal advice to migrants on the Aegean Island home to Greece's largest refugee camp, see the EU's condemnation of Greece as disingenuous rhetoric intended to obscure the fact that the violence serves the EU's goals of keeping migrants out.

"While the violence of pushbacks in the Aegean is scandalous and should be treated as such, it is by no means an aberration from the logic of Europe's border regime, which instrumentalises human suffering for the purpose of deterring migration, at any cost," the Legal Centre Lesvos said in a March 2021 statement. "Europe's human rights framework cannot fail people it was never designed to protect."

The EU has also used more indirect means to deter migrants. These tactics include signing treaties with neighboring countries such as Morocco, Algeria, Tunisia, Libya, Egypt and Turkey to keep migrants inside their own borders, a move human rights monitors say is simply outsourcing the violence of border patrolling.

But in March 2020, Turkey refused to continue obstructing the passage of migrants into Greece. The Turkish coast guard had previously stopped around two-thirds of boats headed for Greece, in Olsen's estimation. Greek politicians described the increased numbers of people arriving following the breakdown of the agreement as an invasion, language Olsen described as alarmist and dehumanizing.

"Normally, an invasion is people with arms, not children and women and men in flimsy rubber boats," Olsen said.

The hostility towards refugees that plays out in the waters of the Aegean sea also plays out on land in Greek courtrooms, Houlis said. He cited the case of two young Palestinian refugees he was defending in criminal court against accusations of burning down a Samos refugee camp. They were convicted based on the testimony of an eyewitness who saw them from 500 meters, or 0.3 miles, away, he said.

"Our chance of having a fair trial is zero percent," he told Law360.

Houlis' primary goal is for N.A. not to end up in prison or countersued by the coast guard for slander due to his wrongful death suit. Houlis is also handling N.A.'s immigration case, leading to him being granted asylum.

While N.A. won't have to go back to Afghanistan, accountability for the death of his son is out of reach: The father and Houlis are, at most, hopeful that the coast guard will be put on the stand and have to explain itself.

"If we make them lose some sleep at night, that is a win for us," Houlis said. "That is the most we can expect."