People working to end anti-Black racism in the United States' criminal justice system recognize that the struggle does not end with addressing officers' use of force. For Jamila "Jami" Hodge, it also requires tackling prosecutorial biases in tandem with both the government and the Black and brown communities most devastated by state violence. 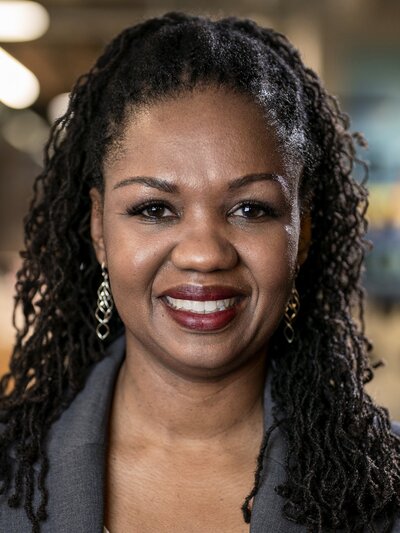 As director of the Vera Institute of Justice's Reshaping Prosecution project, Hodge unites local organizations and activists with prosecutor's offices to enact data-driven and racially just solutions. Most recently, the project announced partnerships with prosecutor's offices in Virginia and Missouri that aim to reduce racial disparities throughout the system by at least 20%. Hodge is pursuing this goal through a mix of data collection on racial disparities, education and policy advising.

These partnerships are the first to come out of a campaign to make racial equity central to prosecution. It was launched last year — under the Vera Institute and the Institute for Innovation in Prosecution's Motion for Justice initiative, which has pilot sites in Massachusetts, Michigan and Minnesota — before Derek Chauvin killed George Floyd, but took on new urgency as the aftermath of Floyd's death in police custody shone a harsher light on prosecutors, Hodge said.

"One of the things about this moment, where we have this real opportunity to reimagine what justice looks like, is understanding that the answers to these systemic problems don't lie inside of a prosecutor's office, or inside of a courtroom," she told Law360 on April 7, a day after the partnerships were announced. "They really lie with people who are closest to the problem."

Hodge's experiences as both a Black woman and a prosecutor — including 12 years as an assistant U.S. attorney in Washington, D.C. — shape her approach to social justice. She spoke with Law360 about the new partnerships, Reshaping Prosecution and how she deals with institutional pushback.

Why did you choose these two prosecutor's offices for your campaign?

I'll zoom out just a little bit first. Our work, in a nutshell, is to be a technical assistance provider who comes in as communities have demanded something different from the role of the prosecutors. So we're seeing prosecutors elected on platforms of change, including ending mass incarceration, addressing racial disparities and being more transparent and accountable. And we come in once they're elected, using data-driven approaches, to help with policy change and implementation through training of staff to basically make those campaign promises real, to have them actually translate into policy and practice change in the office. What we found in the pilot phase of our work is, although we centered racial justice in the partners that we picked and the trainings that we did in the office, and certainly policy development, at the end of the pilot phase … while we saw decarceration, while we saw increased transparency and accountability, racial disparities persisted.

Unfortunately, that's not uncommon. We see it in many decarceration efforts, where we will see the number of people who are in jail or prison go down, but the racial disparities, in terms of how [much] more likely a Black person is to be the one incarcerated, will sometimes stay the same and sometimes even go up.

So we just recognized that to tackle this problem — racial disparities — really required focused attention. Motion for Justice was born out of a process of gathering racial justice scholars, lead prosecutors who'd run on these issues, community activists and advocates that had the lived experience, and with the sole goal of developing something implementable in a prosecutor's office that would tackle this persistent problem of racial disparities. ...We picked three partners that would be our pilot sites. We give the same sort of deep, usually 18-month site engagement, but under this Motion for Justice framework, so really with racial equity at its core.

We didn't want to wait until the end of an 18-month pilot to say to the world, "We have something here that we think could help." And so that's what led to the campaign that we launched [on April 7]. With the campaign, [we plan] to take on 10 more offices in a light-technical-assistance framework that would basically allow us to have broader impact while we're doing the deeper engagement with the pilot sites.

Thanks for clarifying that. So, why these two jurisdictions in Missouri and Virginia?

We're excited about the partnerships with both Commonwealth's Attorney Parisa Dehghani-Tafti [for Arlington County and the city of Falls Church] and Circuit Attorney Kim Gardner [for the city of St. Louis]. The thing that's different about the campaign is that it's not just a partnership with a prosecutor's office. I think one of the things about this moment, where we have this real opportunity to reimagine what justice looks like, is understanding that the answers to these systemic problems don't lie inside of a prosecutor's office, or inside of a courtroom. They really lie with people who are closest to the problem. So in setting up the format for the campaign, a campaign partner must also have a community-based organization that is part of this partnership…. importantly, be a community-based organization that is either led by someone impacted or coming from the Black or brown communities, or certainly serving the communities that have been most impacted by the system.

The partner that is coming to the table with the Commonwealth's attorney is [Offender Aid and Restoration], and they are led by Elizabeth Jones-Valderrama, a Latina woman. And OAR has been around for [over] 50 years [doing] really critical work, intentionally focused on the Black community. In St. Louis, it's the Freedom Community Center, led by Mike Milton, who was formerly of The Bail Project and, again, deeply rooted in the ways that this system is harmful to the Black community and approaching the work with that lens.

The thing that I think is critically important to understand is that the partnerships, again, are not just to increase diversion or alternatives, but it's also for these organizations to be thought partners with the prosecutor on what further policy and practice change can be implemented with racial equity at the core.

Describe how the Reshaping Prosecution project came to be, and how the new campaign fits within that.

My program launched in 2017 as a pilot. Vera had been in the prosecution space before. There was a predecessor program called Prosecution and Racial Justice that was pretty heavily data-focused on looking at racial disparities in prosecutors' decisions. That ran from maybe 2005 to 2014. But again, in response to this movement, in 2015 — really, I personally believe, driven by the number of killings of unarmed Black people at the hands of law enforcement, as advocacy organizations and communities organized and would demand [accountability] of the prosecutor — they recognized that these roles were elected roles, and that they could put someone in these roles who reflected their values. I think the best example of this was in Chicago.

If we think about how prosecutors have traditionally run for office, it's on high conviction rates and long sentences — very punitive responses. Now, we have prosecutors literally naming that their goal is to end mass incarceration. … But again, the problem was, people were being elected but community members felt like they just weren't necessarily seeing an outcome. So Vera was approached about getting back in the prosecution space to bridge this gap.

That's where we come in, to do that important on-the-ground work with them. Again, because we bring data-driven processes — we're looking at their case management system, we're talking, doing qualitative interviews with staff and, increasingly, we're now doing that [surveying] of community members.

Before becoming the project's first official director, you had more than a decade of experience as a federal prosecutor, as well as several years in private practice. Has working in these different contexts, along with your own personal experiences, given you insight that may be missing from the broader narratives about law enforcement racism?

I'm a Black woman, I grew up in Detroit and I saw firsthand, in my immediate family, the way that the system doesn't serve Black people, from both sides. I have a brother who has battled substance use disorder, who ended up incarcerated. And then I have a father who was a victim of a violent robbery that left him with a severe closed head injury. …

I came into the [assistant U.S. attorney] role with my eyes open [and] really thinking it was important that someone who looked like me, [who] had some of my experiences, had some of that power. The mostly Black men — because that really was mostly what came through the Washington, D.C., system — that would be accused under my watch, I knew that they were fathers, and sons, and uncles, and cousins, and family members — and not just defendants.

But what I thought I was coming into was a flawed system. That was broken. I think what I didn't understand — and didn't really learn until I had a chance to step away and to deeply immerse myself in understanding the history, going back to the 13th Amendment of how, when slavery was abolished, it had this huge exception, "except as a punishment for crime," and that the criminal legal system, really from that point, was used very intentionally for the control and the oppression of the formerly enslaved. Having that historical context helped me understand that no, the system isn't broken, it's working as intended.

That's also what we try to bring in our engagement with offices, is to understand the context in which you're working. When you understand that context, then it's clear why race-neutral policies that just don't account for any of this history don't work, they continue to perpetuate the same harm. We have to disrupt the ways that we've been operating and really reveal new ways of responding that will be intentional in addressing this significant legacy of harm.

This work challenges ingrained perspectives on how prosecutors must fight crime. What does institutional pushback look like, and how do you encounter it?

Change is always hard, and I think there has been such a deeply rooted, media-driven attachment of dangerousness to Black skin. The research is really clear on what drives violence: What drives violence is the inability to meet economic needs. It's shame, it's isolation and it's exposure to violence. But instead of doing the things that would actually target that — resource under-resourced communities, create bases and opportunities for community building — providing the basic needs so that needs are met is not what we focus on. Instead, we pour gas on the fire.

There's not a time I don't speak in front of a group of prosecutors, especially, that someone doesn't come up to me after to say, "So what about ... " — and they will pick the worst case they've ever had, the mother that was killed in front of her three children. "So you're saying that that person shouldn't be in prison?" Instead, what I try to point out to them is, "How many of your cases weren't that? And how many of your cases were people [for whom] incarceration did nothing to make it better?" The vast majority of what comes into our system are low-level misdemeanors. That's what has the dockets packed, it's not violent crime.

What excites me about this moment is that we're actually reckoning with white supremacy and the legacy of slavery and racism that drives this, so that we can root the problem out, get at what is driving it and really open up the opportunity to have these different approaches.