Resentencing Laws To Cut Terms Gain Momentum Across US

More lawmakers and prosecutors are considering resentencing laws to decrease mass incarceration and address the over imprisonment of people of color, recognizing that extremely long sentences don't deter crime and disproportionately target minorities, according to a recent report.

The Sentencing Project, a nonprofit research organization that aims to improve the U.S. criminal justice system and reduce the prison population, reported that 25 states, including California, New York and Illinois, are considering so-called second look laws that give convicts the chance to have their sentences reduced after they have served a certain number of years. 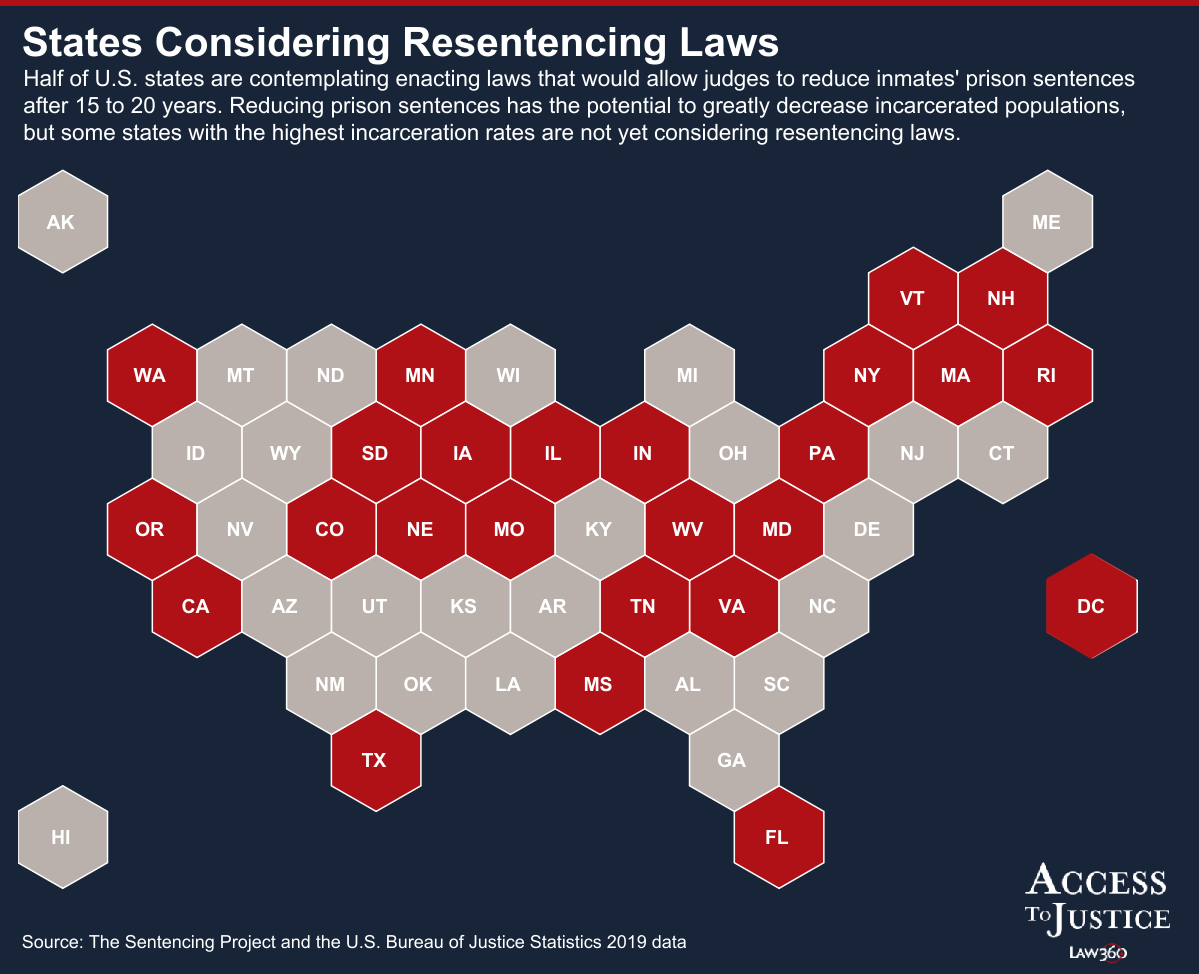 According to data from the U.S. Bureau of Justice Statistics, the American prison population nearly doubled from roughly 800,000 in 1991 to almost 1.6 million in 2009.

Resentencing laws can potentially correct the flaws of these failed policies and reduce inmate populations, according to a report the nonprofit released Wednesday.

Nazgol Ghandnoosh, a senior research analyst at The Sentencing Project who wrote the report, told Law360 that many incarcerated people serving 10 to 15 years would be eligible for reevaluations of their sentences under the legislation being considered by many states.

"There's been a growing abundance of research showing that long sentences are ineffective and inhumane, and they tie up resources that could be far better invested to promote public safety," Ghandnoosh said.

While having more resentencing laws on the books will go a long way toward reducing mass incarceration, states need to do more than pass second look legislation, Ghandnoosh said, noting that significant work has to be done to effectively implement such laws.

Some of the states that are not considering second look laws include Louisiana, Oklahoma and Arkansas, according to The Sentencing Project report. According to 2019 BJS data, these are among the states with the highest incarceration rates.

For states that are starting to consider second look laws and those that have not yet tackled the issue, Ghandnoosh's report provides a guide for who should be made eligible for resentencing and how these laws should be implemented.

Ghandnoosh said that Washington, D.C.'s, Second Look Act passed in December 2020 is model legislation for the states. Under the law, people who committed crimes when they were under the age 25 can petition courts to reduce their sentences after serving 15 years. Up to 29% of incarcerated people in D.C., more than 1,000 individuals, will eventually be eligible for resentencing under the law, Ghandnoosh said.

In California, lawmakers passed Assembly Bill 2942 in 2018 that allows district attorneys to request resentencing for anyone who was sentenced in their county. Ghandnoosh said the California law is also a good example of how states can initiate resentencing.

Now California needs to expand its second look law to allow incarcerated people to request reevaluation of their sentences, Ghandnoosh said, adding that the state is currently considering a law that would permit individuals who have served 15 years in prison to petition courts to reassess their sentence.

"California's experience demonstrates the potential of reaching a bipartisan consensus among prosecutors on the principle that some are serving unjust prison sentences," the report said.